I've been getting a lot of spinning beach balls recently in different apps on OSX. They seem to happen with great frequency when right clicking, but this is not restricted to a single app. It happens in Safari, Adium, NetNewsWire, etc. My gut feel is that there is that there is some common facility/plugin/routine causing this, likely from some third party extension or something else I've enabled.

What is the best way to go about trying to troubleshoot this kind of issue? Can I somehow dump the hung app to see what it is trying to do? Are there some things I can do to track down what might be causing this.

One utility to track down hangs is called Spin Control, which is installed with Apple's Developer Tools in the /Developer/Applications/Performance Tools folder. Once you open it, and an application hangs, it will ask for your password and start collecting data. Once the application crashes or becomes responsive again, you can look at the report it collected. 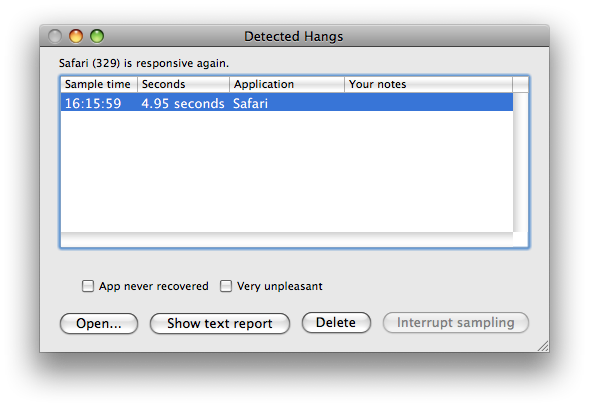 You can poke through the report and look at the listed calls, which are all the things the program was doing (indented items are sub-calls). The number next to each item in the list appears to be how much time was spent in that call, so if you look at the names of them (at least the intelligible ones), you may be able to glean some information as to what was taking so long. If you find something you're not sure of, you can also ask about it specifically.

And, if an application crashes, if you click the "Report" button, you will get a similar list of the things the program was doing when it crashed, in addition to the error that was raised. If you look at the error description, and look near the end of the list of calls, you can probably figure out what went wrong.

Thanks for the responses, they were very helpful. jtbandes gave me the first step in solving the issue, but I wanted to go into detail of the other parts in case it helps others.

I was able to get the problem to happen in a reasonably reproducible way with Adium. Basically, start the app up, open a conversation, type in some text and then right click on some of the text. Spinner the first time after launch, lasting for over a minute.

So I started up Spin Control, went into the preferences to target only Adium, followed the procedures to cause the problem. Was able to get a text report of the issue and found what I expected was the issue:

So it did appear that I was running into an issue with a plugin, but the context lacked for details of which.

So I relaunched Adium but this time I also had the Activity Monitor open and selected the process and used Inspect->Open Files and Ports to monitor what specifically the app was working with. When I repeated the steps to generate the problem, I was able to grab the following from the listing (note new files/ports opened appear at the end of the list, so it is easiest to find the problem by looking at the end of the list):

From this I was able to go through the items in my local Context Menu Items directory and determine the one causing the problem.

Thanks for the help.

Well, it could be a 3rd party extension, or it could be low ram or a slow harddisk. What kind of computer is it? Open up "System Preferences." Do you have any icons under "Other"? Open up /Library/InputManagers. Are there any files there? When an app hangs, force quit it and click on "Report." Post the log here.

Not the answer you're looking for? Browse other questions tagged macos mac troubleshooting or ask your own question.

3
Can I seize control of Cmd-Left in OSX?
1
Can I force Snow Leopard to open new windows on my primary display?
3
Mac OS X - how can I tell which process is causing intermittent freezing?
3
What is causing the atrocious performance of my Macbook pro?
0
How can I get Windows to apply its settings?
0
What order does a hard drive write to disk on a Mac
1
Beats Music not working as Fluid app
2
Clipboard inconsistent between applications