After installing the 2 files for Windows 7 Windows XP mode, the Start Menu now has

This is the dialog box: 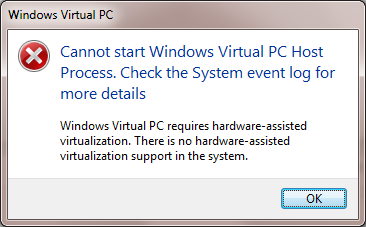 Update: the computer is an HP TouchSmart, with American Megatrends BIOS v02.61. I looked into the BIOS set up but it is quite simple and dosen't have something for "hardware assisted virtualization". The CPU is Intel Core 2 Duo T5750.

Your machine may support it, but not have that support enabled. If your CPU supports hardware assisted virtualization, there will be a switch in the BIOS that will enable it.

UPDATE 2: Following your comment, it looks like you won't be able to enable the virtualization support without changing your CPU :(

Turn it on in your BIOS. If you don't have it (some motherboards don't have this feature), you'll not be able to run XP Mode, but you can run software virtualised VMs like in the past.

Not the answer you're looking for? Browse other questions tagged windows-7 virtualization windows-xp-mode or ask your own question.

16
Does Windows 7's XP mode require hardware virtualization? What are the requirements to run XP mode?
4
Using Windows 7 XP mode to do development