The GPU heats from room temp. to about 55°C with just booting and surfing on the web. I was playing a game that I played lots of times before, without problems. After a minute or so, there are sudden decreases in the fps, lasting for only a second or two, which I think is throttling. GPU-z logs revealed that this causes the temperature to drop to ~70°C from 89°C. And the GPU core clock goes from 670.8 MHz to 202.5 MHz.

I can't remember the exact timeline, but I made a few changes to my computer: added an extra 4 GB RAM, upgraded to Windows 8 (from 7), then recently made a clean install of Windows 8 due to problems caused by upgrade, and made sequential updates to the nVidia driver. I remember to be able to play the game smoothly after the Windows 8 upgrade. And the RAM upgrade was even before that.

I could not open up the laptop to see whether the fan is clogged with dust, but when I opened up the RAM module compartment, I saw no dust on that part of the main board. (I know that dust is more likely to accumulate around the fan, though.)

A friend thinks that it is because of the summer weather (around 25°C now), but what am I supposed to do, only use my computer in winter, in which case the temperature would be 17-20°C indoors.)

What could be the problem, and what can I do?

The laptop is roughly 2 years old, and I determined that from the reviews dating to 8/25/2011. I would download a utility like GPU-Caps Viewer, and more specifically Furmark to get the most accurate picture of what temps your GPU is running at under specific stress tests. However, the temps you list sound a bit high.

That said, it is quite possible the heatsink has an accumulation of dust that should be cleaned. Here's an image I used in a previous answer...

It's not a heatsink from your model, but it is a great example of how dust can and will build up on the leading edges of the sink. You can see enough dust to impede airflow after just a year of regular use. Think of it like a lint trap in a clothes dryer. A little dust will catch on the edges of the sink facing the fan, and that dust will in turn catch more dust, until you can end up looking like that... or looking like a piece of felt.

In short, it can't hurt to carefully disassemble the laptop and clean the fan and the heatsink... or pay someone to do it for you.

From this image of the fan assembly for your laptop (from an ebay.com listing)... 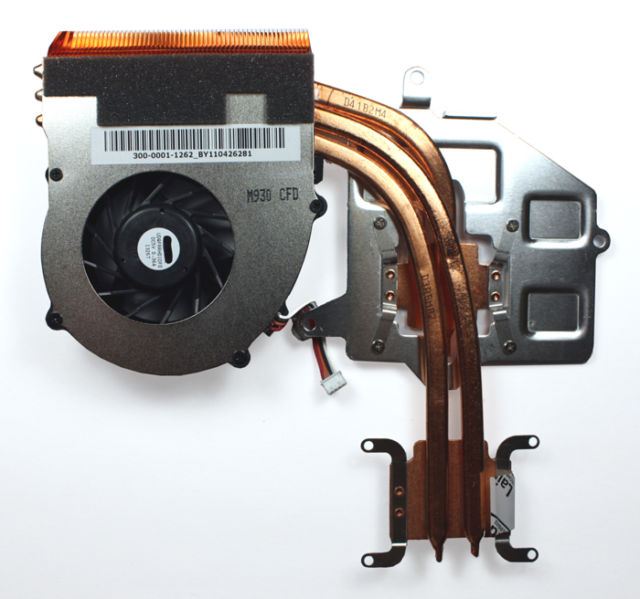 ... it is designed to use a single fan to cool both the CPU and GPU. Which means you've only got one heat sink to clean. At the very least, checking the condition of the thermal pad between the assembly and the GPU would be in order. This will also give you the opportunity to ensure the assembly is sitting properly on the GPU.

So here's how I solved it:

I opened up the RAM bay and removed the RAMs. Then, using a nitrogen tank (using anything other than compressed air or an inert gas without dust particles can cause the hardware to be damaged with static electricity) with very low pressure, I blew the dust from the RAM bay to the fan. A lot of dust, along with some hair, flew out of the fan. I did this like 10 months ago, and the GPU has worked perfectly ever since.

I've got the same laptop. It's probably around 4 years old. I've cleaned it twice during its life span(even once with a vacuum). But it kept overheating. Then I got an idea to buy a cooling pad for it along with a thermal grease.

When I unscrewed all the screws and taped it to my scheme on a paper sheet (tips from that guy: Laptop Hardware Repair by Eli the Computer Guy then took out the single heat sink, I discovered that the thermal grease was solid as stone and dry as a dinosaur bone!

The components never got hotter than 60 °C on a cooling pad even with PC Mark. The pad is Silentium Glacier NC400. Very quiet and fancy.

One remark: Always check your laptop vendor site before upgrading. If it says the software is not supported with your model, then you're going to have problems if you upgrade. I was a geek-noob back then but somehow managed to keep my laptop and my head above water.

If the device doesn't support Windows 8, it doesn't support Windows 8. Be lucky you got this far... and be careful you don't cook your GPU without the proper software controls being able to throttle both the GPU and its fan. Dangerous territory. I tried a small overclock on my old Vaio and permanently fubared my GPU, constantly crashing whenever I tried any game. Tread lightly, downgrade to Win7, or get a new laptop. Best wishes!

Not the answer you're looking for? Browse other questions tagged windows-8 graphics-card nvidia-graphics-card overheating or ask your own question.