I need some advice with a tough PC driver problem. I have an exotic smartphone (Hero H2000+) which isn't recognized/shown as portable device in Explorer when I plug it into my PC. It shows up with an yellow exclamation mark under device manager. The device itself is set as MTP and USB-Debugging is off.

I already found a working driver but it doesn't start correctly. I can right-click the device and select uninstall. After that I manually Scan for hardware changes and Windows recognizes & reinstalls the portable device. Presumably with the same driver since I cannot tick Delete the driver software for this device.

Now comes the strange part: Normally you would expect that the yellow exclamation will come back after the driver installation. But no! The device is now fully functional and visible in Windows Explorer. First I thought "Hey! Finally I have a working driver".

But this only lasts until the next PC reboot. Then the exclamation is back and I have to repeat the above procedure.

What I have tried

Q1: Why doesn't Windows recognize my device even when it already has a proper driver? And how can I fix this

Q2: Can I somehow assure that those driver INF files showed in the Gif below are only for my portable device and save to remove? Or are those default Windows driver files?

Before and after driver uninstall & reinstall process

The description under device status is

I plugged the portable device into a second PC where it never was plugged in before. It doesn't show the same behavior. A Microsoft driver was installed without issues and stays normal after a reboot. That was not the case when I installed the device on the first PC half a year ago. Something changed and Microsoft has now included his own driver version for this device.

Q3: How can I do a fresh driver install so the MS drivers will be used?
(Remember, no checkbox while uninstalling!) 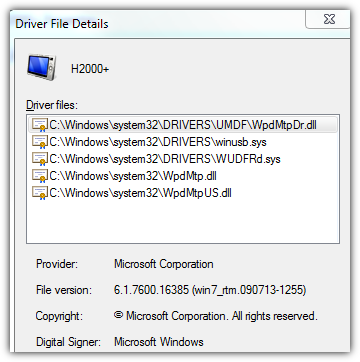 These files seem to be important. Can I really delete them? Will Windows reinstall them if needed?

I used Drivermagician to backup the driver (uploaded at ge.tt) from the second PC where it is working.

After this I uninstalled the faulty driver on first PC and preventing automatic driver installation via gpedit.msc. Rebooted, still uninstalled, good.

Q1: Why doesn't Windows recognize my device even when it already has a proper driver? And how can I fix this?

A Code 37 error basically means that the driver installed for the hardware device has failed in some way.

If you used phone with your PC before, try to rollback drivers. If you didn't or it doesn't help, update driver. Is there a driver from phone manufacturer(on CD, online)? These drivers are often better than Microsoft's. Run sfc /scannow in command prompt as administrator. It repairs system files. Deleteing the UpperFilters and LowerFilters registry values might also help.

Resource : How To Fix Code 37 Errors

Q2: Can I somehow assure that those driver INF files showed in the Gif below are only for my portable device and save to remove? Or are those default Windows driver files?

They are Windows drivers, so don't delete them.

Q3: How can I do a fresh driver install so the MS drivers will be used? (Remember, no checkbox while uninstalling!) 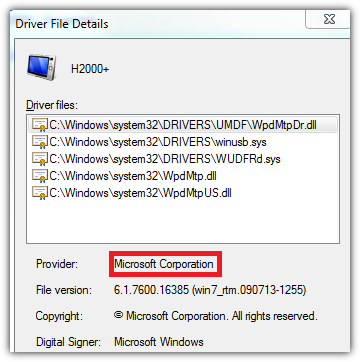 You already have MS drivers.

It would help if you gave us the details of the driver that's working and the one that isn't.

You should first fully patch Windows, including any optional Windows Updates that look as though they might pertain.

If the problem persists, and since you have one PC with a working driver, you could transfer this working driver to the non-working PC, as detailed below.

Download and install the free Driver Magician Lite on the computer with the working driver, locate your driver and backup it up. This is normally written as a folder.

Copy this folder to the problematic machine, go into Device Manager, right-click on the device, choose Update your driver, then Browse my computer, finally point to the driver folder and it should automatically locate the driver's file. Install and reboot.

Sometimes Driver Magician Lite creates a non-complete backup of the driver. Let me know if this happens to you and what is the error message.

There are also several products for automatically finding drivers. Not all are useful and some are even malware, so ask for our recommendations first if you wish to go this way.

So it is recognized and working, and the problem appears on reboot. This is kind of a long shot, but is there a BIOS update available for your system?

I had similar issue. This post is about how I solved it myself. the solution does depend on the platform / Device details though.

What I did recently on my notebook which I think could have caused the issue ; I used a PC cleaner software which did brilliant job in Cleaning the junk..freed a lot of space from my C:/ ---up t0 8 GB. Improved boot up time etc. But it came with a price...2 major issues. 1> My browser started taking forever to load and 2> My phone stopped getting detected.

Troubleshooting steps: 1> First off I UN-installled the Cleaner s/w. 2> Re stared the notebook -----> Still the issue was not solved. As the drivers were not working even if they were present in the machine. that's what error code 37 stands for. 3> Tried un install and re install of the drivers ... But the system told me that I already have the best drivers available. The ugly yellow mark still stayed there. 4>Did a bit of research and realized that there is another way to getting this thing to work. Every phone manufacturers (Well Most) come with a small client software which is used to managed the data/music and video and helps transfer of data to and from the phone.

For Samsung its called "Samsung Kies". The best thing about this software is...even if you dont want to use them for data transfer , it helps to re-establish the connectivity.

5> I just did Re-install drivers on Kies -- It asked for confirmation --I said Yes. It asked to remove the USB cable untill it is finished. It does that in 3 steps : 1. It installs the USB drivers 2 MTP drivers 3 something called ACD (dont know what that is) (Note that this is specific to Samsung phones)

10 mins later it finished doing it. I think it installed the same drivers from the PC but this time they work. 10 mins Later I connected the phone. It asked me to keep my phone in MTP mode... and I got connected. If I keep the phone in normal "Camera" Mode . I can see all my folders in my phone under My computer. I could see the memory card. And the Yellow exclamation mark disappeared and now it shows GT-I8262 (my phone model)

So to summarize if your phone copmany provides similar software like Samsung provides Kies. I am pretty sure it should have the similar options and it might just work for you too.

0
Ethernet and Wireless Driver problems on Sony Vaio VGN-NS20S
3
How can I reinstall my AMD 880g/sb850 usb driver?
1
Why am I unable to access my files on my Nexus 4 from XP?
1
WAN Miniport (Network Monitor) #2 network adapter has exclamation mark in device manager
0
Windows 10 keeps uninstalling my Creative X-fi drivers
1
Network adapter driver must be uninstalled on every reboot, server 2016
0
USB Driver - This device cannot start. (Code 10) - Insufficient system resources exist to complete the API
2
Generic Scanner Driver for windows 10