Error: EDID Checksum is invalid when logging in to Fedora

Let me start off by saying that I'm a complete Linux noob. I've played around the GUI and the command line, but I've done nothing of the sort that I can do on Windows.

I'm handling a client that makes use of Linux, Apache, Pear, and PHP, along with Oracle 10g. Due to complications, I'd like to recreate their setup - any errors I might encounter along the way are to be documented, and solved. That way, I can learn the ins and outs.

However, I did not expect that merely installing and running Linux would be such a pain already. I'm using Fedora, the latest available version, x86_64. After downloading the ISO, burning it to a DVD, and booting up from it, I was greeted by the 'Live System'. After picking out whatever is the easiest from a variety of options, I was finally allowed to install it to the hard drive.

A few minutes later, it says it is done, and it will use the HDD-installed OS from then on. Seeing no option or command to reboot on that blank Fedora screen, I just flicked the reset switch on my PC.

When it came back on, first, it showed me a boot screen with two options:

I chose the first one, as I have no idea what the second one is. It greeted me to a log in screen. Upon entering my password, it shows a black screen, with the following error:

There are some numbers and text underneath, and I'm not sure if there's anything at the top - for some reason, that entire error, including the cursor, only occupies the top left of my screen.

And it just stops there.

I have no idea how to deal with this. Can anyone help?

Based on comment and your description, you may not have completed the installation fully. When Fedora 19 is done being installed, the installer (anaconda) shows a Reboot button: 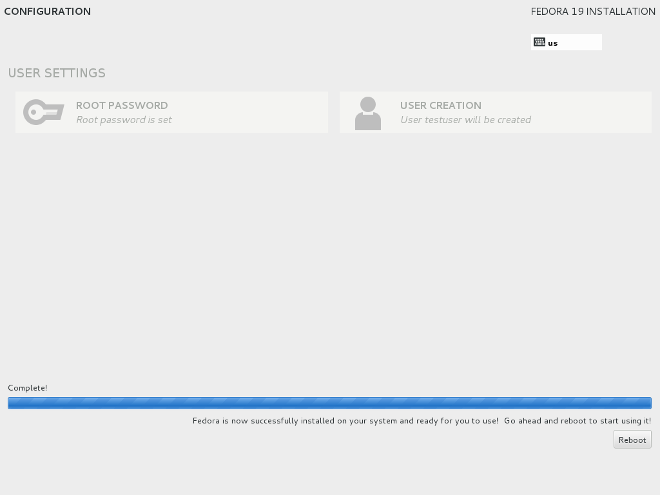 Perhaps try re-installing Fedora from the DVD. You can follow the Quick Installation Guide to make sure things are proceeding normally.

Not the answer you're looking for? Browse other questions tagged linux fedora or ask your own question.