On random occasion, the image on my screen will become extremely distorted for no reason- and in some cases these glitches can be reversed simply via changing the monitor configuration from 2 monitors to 1 monitor and back, or to the extreme of having to reboot the computer, interrupting my work in a serious way. Luckily, these errors rarely occur, but i cannot have my GPU gradually get worse to the point where it doesn't function to my needs. 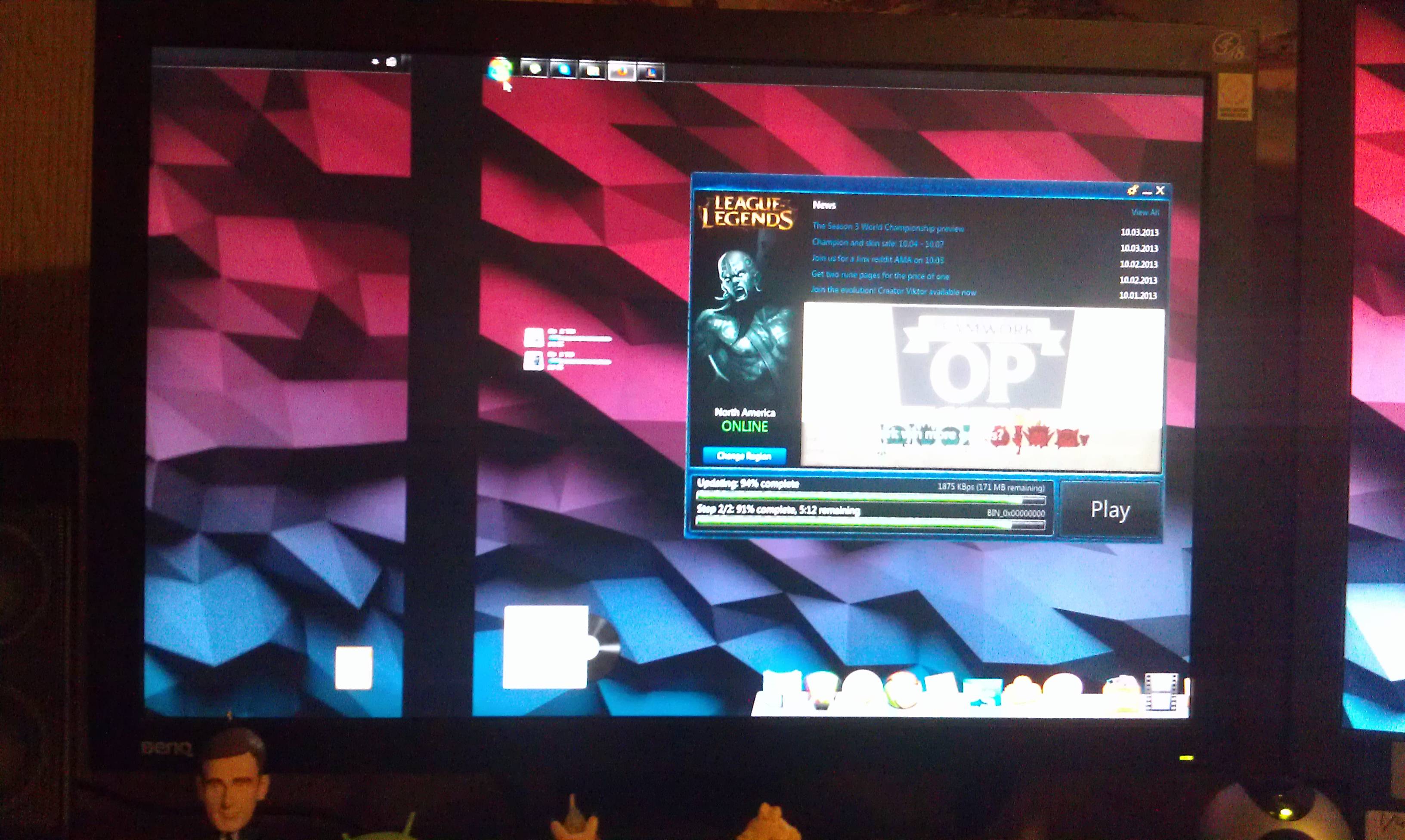 The monitor the above glitch is being viewed on is a Benq Widescreen monitor (no idea what the resolution is / can't recall). The shot above was taken earlier today, but i experienced this error earlier over summer too, and before that time, soon after i installed Windows 7 onto this computer for the first time (mid last august I screwed up the operating system a bit and re-installed it, and with that, reinstalled the drivers for my GPU). I'd also like to note that the left part of the affected monitor has somewhat of a line pattern on it (image below) 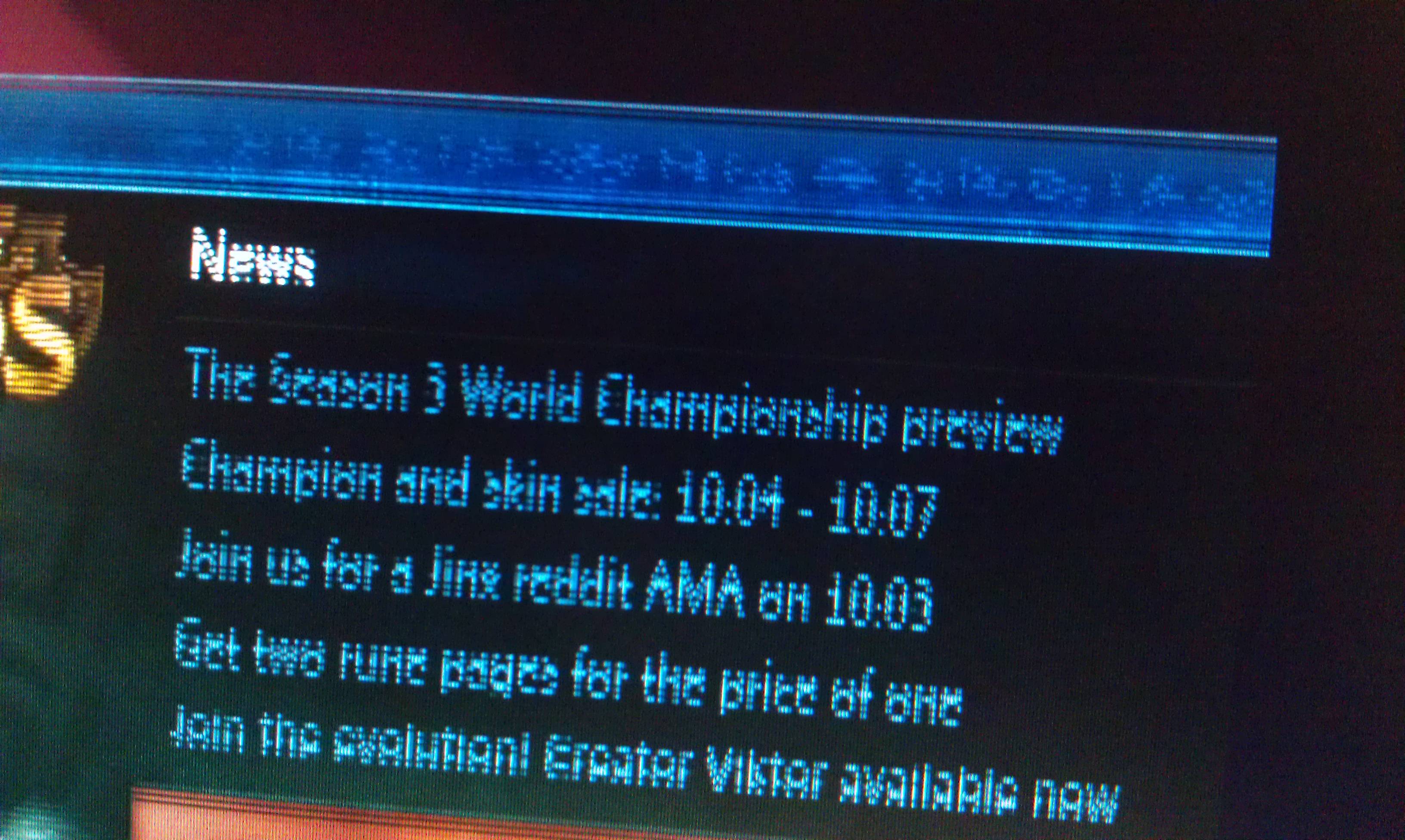 This also happened with the monitor I was previously using, which was square like my secondary monitor. I Will also note that this does not effect my second monitor. The only solution that I can find to this problem is essentially shutting down the computer in some way, be it either by sleeping the rig or actually shutting it down and turning it back on. The computer operates completely as it normally should save for the screen glitch when this is occurring, and It doesn't crash any applications when it happens. 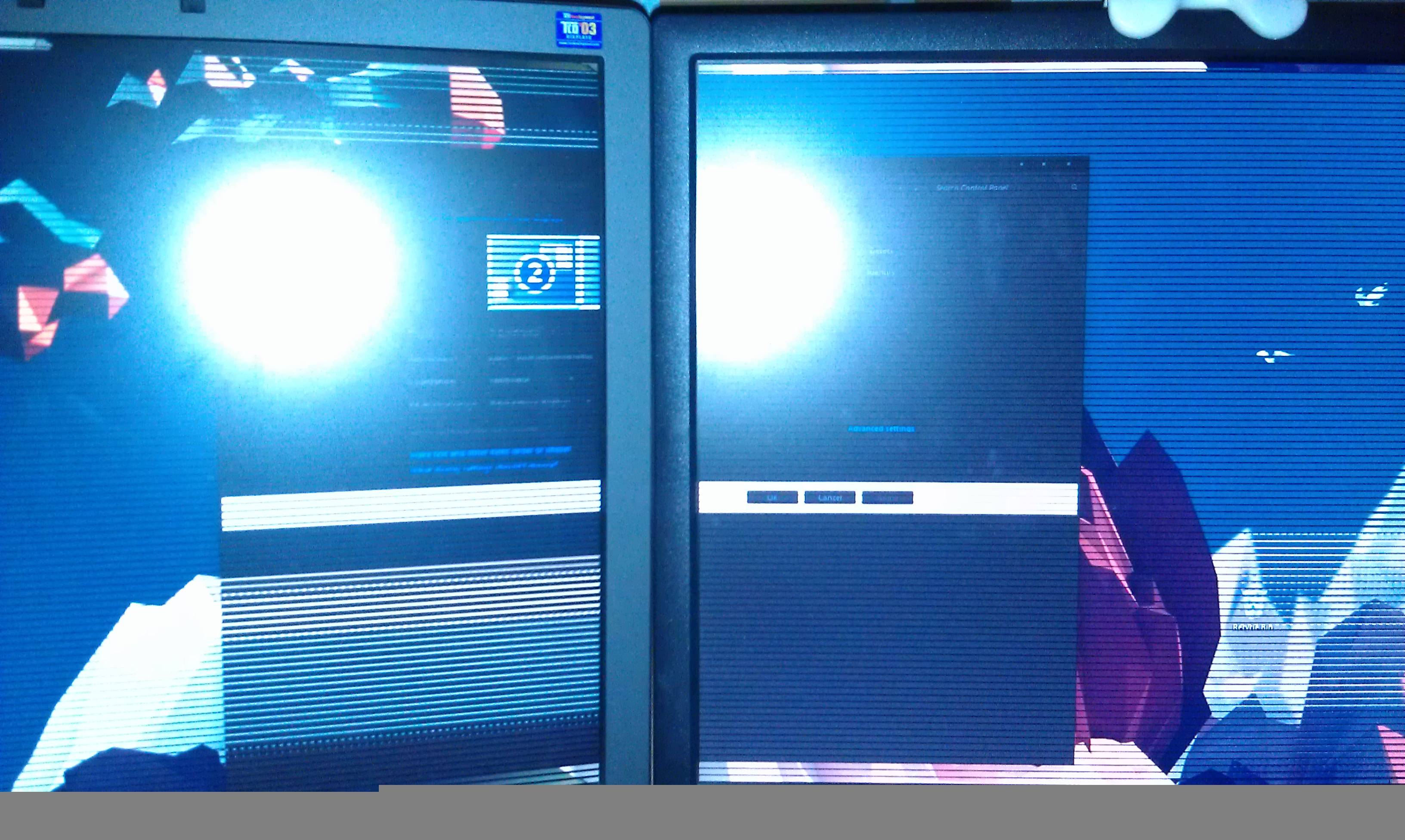 These random stripes are pretty much the same as the last situation- save for what the problem is. The shot above was actually taken last july, before i reinstalled windows. This glitch actually crashed the instance of photoshop that I had open at the time, but thinking back on it, the graphical error could have been caused by photoshop crashing in the first place. Again, the glitch here could only be resolved via reboot. Not much else to say on the matter. (Pardon my camera's Phone's flash >_<)

Situation 3 (wasn't able to capture this error...) A couple nights ago I opened up a right-click menu, selected a menu item, and continued as usual- BUT, the selected item kinda stayed on my screen where I selected it. Any GUI elements behind it still work, and this lingering menu selection seems to be non-effective to the computer. Truth be told, this could have been from the computer being on for a long duration, and I HAVE experienced it on other computers before in the past (the other two errors occurred when the computer hadn't been on for much longer than 1 hour- hardly a duration of time in which it could overheat or anything). The remedy for this situation I found was simply switching the monitor config and then back, but as soon as I open up another drop down menu and select an item on it, the error occurs once again. I have seen this lingering GUI Element glitch with other things, too- Toasts, Tooltips, Etc.

I Am using an AMD GPU, Yes, and I do know that their products are not quite as high quality as NVidia products, but my current GPU has been serving me very well for the year or so I have had it, and I sure did pay for the quality. Its an XFX card, too, and to those who are not familiar with the brand, they are one of the best hardware developers on the market.

EDIT~ adding the information @psychogeek asked me to put on here.

The left monitor i am currently using is set at 1680 by 1050, and the right monitor is set at 1280 by 1024. The one on the right is actually plugged into the Monitor 1 Port on my GPU, meaning that the left monitor would be plugged into the 2nd port. Both are using DVI as their connection type. The left (second) monitor is set to be the main display, with the right (first) monitor extending from the other one. I am not using Eyefinity in this configuration, despite being able to.

All of the 5 fans in my computer are operating fully and always have been, since the purchase of this computer. I am quite sure cooling/overheating is not a problem here.

Edit 2~ added a bit of information that may be useful for some of you.

no one mentioned the power supply , that would be my first guess , my screen just stopped working with the gpu connected but started working when disconneted (using gpu on cpu chip) and it took me a while to guess it was a faulty power supply.

Not the answer you're looking for? Browse other questions tagged windows-7 display graphics-card gpu or ask your own question.

14
Is my GPU dying?
1
GPU not powering on
2
Which GPU does BIOS use for video output? Or is GPU involved at all?
2
Random graphical glitches in Windows 7
0
GPU fans get really loud right before computer shuts off
0
Two GPU Setup - Only One GPU Works With Monitor
1
GPU not showing/not working after power outage