Skype - Unable to use Webcam

This question might already exist the answer, to be frank, wasn't very helpful, and the only answer was a response to a comment the author made. As far as I am concerned it's not a duplicate of this question because the original problem was unlikely because of the firmware.

I have been looking for a solution to this problem for at least 45 days. I have tried the proposed solutions on the Skype Community Forum, the search results using Process Explorer, indicates my camera should be working.

This problem happens when both my Logitech and Lifecam Studio are connected. I have tried amcap, but the program doesn't seem designed to work with a 64-bit operating system. I use the Webcam Diagnostics I found on the same website, and everything checked out.

My camera was working at some point in the last year, this problem is recent ( at least 45 days ) I just can't figure out the cause of my problems. I have also tried booting with only required services, and the problem still surfaced.

Let's start with the basics. When I attempt to view my video settings, I get the following message:

Can't start the video. Try closing other programs that might be using your webcam. 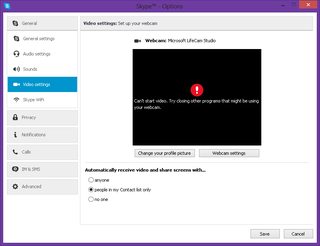 But the device is working properly: 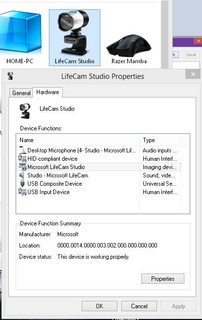 I should add the following. I am indeed running Windows 8. I loaded up a virtual machine with Windows 8.0 and Skype video worked without a problem. So there is something that has been installed or running ( despite the process explorer results ) causing the problem. I just can't figure out how to find it.

If the community does not come up with something, and the update to Windows 8.1 does not resolve it, I plan on buying a Premium subscription to get technical support from Skype/Microsoft. If that happens and my problem gets resolved, I will post the solution for the community. I am hoping we can find the solution together.

Out of curiosity, I installed ManyCams, and after I removed the toolbars, that were installed even after I declined to install them, it gave the same error. ManyCams support hasn't been very helpful. There is no diagnostic mode. I used Autoruns to boot to a minimal configuration, and the error still surfaced. Procmon didn't register any failures with Skype.exe itself. I have an open dialog with ManyCams ( their advice sucks, but it's free ).

I found another duplicate with a non-accepted answer. The user didn't indicate if the solution worked, but I have already tried that, and it didn't work. Since I have an ASUS ROG ( Republic of Gamers ) motherboard, I will request their community for assistance also.

I should mention I used Acronis True Image 2013 Plus Pack back in June/July timeframe to migrate my legacy system to my new hardware. I am not exactly sure if I attempted to use Skype (right) after the migration, I just know the problem has been around, for at least 45 days. My legacy system was running Windows 8. My current system is running the migrated installation of that same Windows 8 installation. This isn't the source of the error.

This problem surfaces with any web camera. I originally had a Logitech product. I noticed this problem a few weeks ago, installed the current drivers, and still had the problem. I purchase the Lifecam Studio in an attempt to solve this question. When first installed the drivers were the most current drivers. Both the Logitech and Lifecam Studio have the current firmware and drivers.

So I thought I had something when I discovered the following unsigned drivers. This turned out to pretty much nothing. I will be turning on the logging capabilities of Skype to see if I can capture a hardware event. The driver problem has been since resolved, and those six drivers now are signed.

This is also an update based on a comment I made earlier. The Windows Store applications cannot be classified as your traditional 32-bit or 64-bit applications, while their process might be 64-bit or 32-bit, they are required to use entirely different WinRT drivers and library files. For instance, I know for a fact the Windows Store Skype application does not use the VC++ drivers, which are the exact drivers I suspect are the cause of this problem. Both the 32-bit and 64-bit VC++ drivers used by the Webcam are unsigned. While this could be a driver issue, it's both 32-bit and 64-bit drivers, at least until I can find a 64-bit desktop application.

Some additional details that I forgot to provide. My motherboard is a MAXIMUS VI EXTREME, and during the first week of using my new computer after I confirmed everything else was working I installed all the included software installed by AI Suite 3 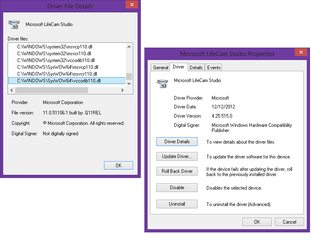 So does anyone have an idea on how to solve this infamous error?

Apparently Asus motherboards have a utility called Ai Charger+ that causes this issue, and there is a semi-official patch to fix the problem posted by ASUS moderators on their forum:

You stated that the cam works in a VM. I assume that VM is hosted on the same machine that has the issue? Does the VM run the same OS as the problematic PC? If so, does the webcam stay in the same USB port when you forward it through to the VM where it works fine?

Just reading through your very detailed (thank you!) description, it would seem to be a very strange issue indeed. I would be interested to know if another webcam that is known to work, behaves in the same way on that pc. If it does, perhaps it's something to do with the actual USB drivers? The HID stuff. You might try downloading the latest chipset drivers for your mobo, then uninstalling and deleting the existing USB/HID drivers and then reinstalling the chipset drivers and see what effect that has.

At first I would recommend you to check your webcam on another computer or OS to make sure you have no hardware problem. Also, try to plug your webcam to another port. If it's hardware problem, then check cables, clear and dust everything inside webcam.

If it's software problem, then:

Please try to update DirectX and then check.

This information is posted in the context of ASUS Ai Charger+ V3.01.00 supplied by the June 2013 media that came with the Republic of Gamers motherboards released at the time. The version of AI Charger+ in question was installed ( if selected ) with ASUS AI Suite III V1.00.43.

byndthgrve from the Logitech user forum wrote the following on June 20th, 2013:

So if you like ASUS AI Suite III, try installing everything or just the parts of the suite you want or need except for Ai Charger+. Or test it yourself to see if you get the same results as I did.

I have uploaded it to my Google Drive, please test it and update your findings

I've had the same problem. Here's how you can fix your webcam problem with Skype after having migrated to Windows 8.1:

Installing the Windows Version of Skype on Your Windows 8.1 Machine By Woody Leonhard from Windows 8.1 All-in-One For Dummies.

Skype on the Windows desktop is considerably more powerful than Metro Skype. Here’s how to put the regular, old, everyday Windows version of Skype on your Windows 8.1 machine:

Not the answer you're looking for? Browse other questions tagged windows-8 skype webcam or ask your own question.

119
How to remove/reset Windows Subsystem for Linux on Windows Insider Build 14316
13
Your webcam is currently being used by another application?
1
Can't start video. Try closing other programs that might be using your webcam
0
Windows 10 Built-in microphone not detected
0
HP Webcam a127c driver
0
Webcam bring used by another program (Windows 7)
1
Camera doesn't show video in Discord/Skype
0
Camera app not detecting camera after driver installation
1
Windows 7 webcam not functioning with warning message "Camera is used by other application"

1
Webcam Error On Skype Ubuntu
4
The webcam is recognized by Windows 8, but no application can use it
5
How to use built-in Webcam with Windows 8?
0
Problems with webcam
0
Picture issue with Skype on Logitech HD Webcam C525 since Windows 10 1903