On x86 architecture, why are there fewer bits for virtual address space than physical?

I was reading this article on 64 bit computing, and it mentions:

For example, the AMD64 architecture as of 2011 allowed 52 bits for physical memory and 48 bits for virtual memory

I would think that it would make more sense to allow for more virtual memory than physical memory, so why is it actually the other way around?

Bonus question: What does it mean to "allow" for 52 or 48 bits on a 64 bit architecture? What are the other bits used for? 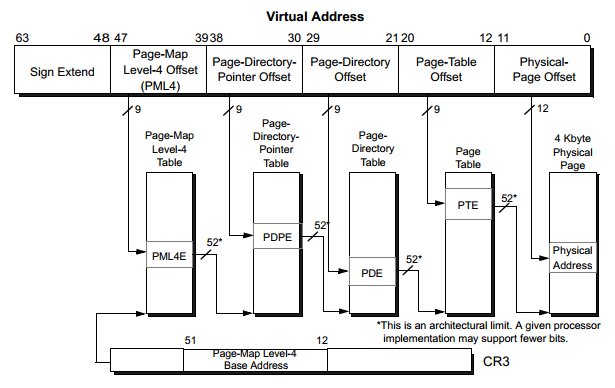 Each Page-Table Entry (PTE) (or, depending on level called PDE, PDPE or PML4E) is 64 bits = 23 bytes. So there are 29 entries per page. So 4 levels of page table gets you 4x9+12=48 bits of virtual address per process. Walking the page table is expensive, so they won't expand to 5 or 6 levels unless/until there is consumer demand.

It's not necessarily backwards that there is more physical memory than virtual. Virtual memory is per process while the physical memory is shared by all processes. So a server with 48-bit virtual addresses and 252 bytes of memory could support 16 simultaneous processes and still guarantee not to need to swap.

A few points to consider, physical RAM is expensive. Sure 16 GB is cheaper now that 4GB was only a few years ago, but 2^64 (16 exabytes) ridiculously large.

So AMD's extensions of the x86 for x64 "allowed" up to 2^52 by limiting the registers. This does two things, lowers the cost of processors and improves performance. More registers that are not used means that there is a lot of empty space that must still be taken into account during operations.

As for why AMD allowed more physical RAM then virtual, the article states it is because AMD was thinking of servers. Servers need large amounts of physical RAM. Virtual RAM is too slow to support the average server applications for hundreds or thousands of employees.

My own thoughts: We have left the time when RAM was tiny, and hard drives had to support RAM. The price in RAM has fallen to a point where the average persona can put in more than enough RAM. Take typical applications, like Office which requires 1-2GB of RAM. My computer 7 years ago could handle that. Although with read and write speeds to disk, I would hope I never had to retrieve a 7GB file from virtual memory (using the old PM * 2.5 philosophy).

I also can only assume AMD wanted to leave room for registers that use the physical RAMs registers, like RAM on integrated GPUs.

Not the answer you're looking for? Browse other questions tagged memory 64-bit computer-architecture or ask your own question.

7
Why 32bits OSs can't address more than 3.2/3.2 gb of memory?
2
Bits of CPU, architecture and OS
3
Virtual Address Space limits in Windows NT: arbitrary for Itanium?
2
What's the virtual memory address space limitation of a Win32 application?
2
Address space of Itanium (IA64) processors
2
Is there a difference between an I/O port and a physical port?
1
Can one use 4-bit, 8-bit, 16-bit, or 32-bit sized pointers on a 64-bit machine?
5
What are the differences between a physical and virtual RAM disk?