How to disable software-initiated overheat shutdown (due to broken sensors) in Windows 8?

A power spike broke the CPU temperature sensor on my motherboard. Memtest86+ runs fine. However, neither Linux nor Windows boots under default options. Windows simply shuts down during boot. Linux reports overheat during boot and shuts down in a few seconds. If I specify thermal.nocrt=1 in the kernel boot options, Linux will boot and work correctly.

It is reasonable to believe that Windows shuts down also because it sees an extremely high temperature. In order to use Windows on this motherboard, I need to disable the software overheat protection. Essentially, I need the equivalent of thermal.nocrt=1 in Windows. Is that possible?

Apologies that I don't have it for Win8, but it should be similar to Win7 --

NOTE that some systems do not have this control in this location. 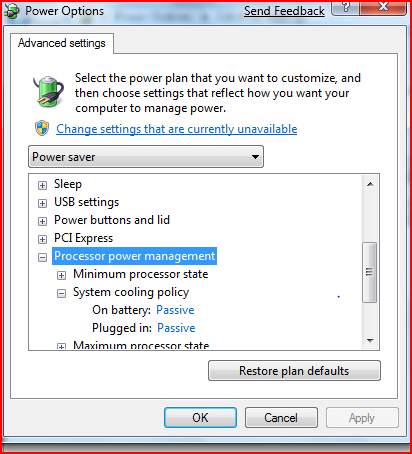 I would like to note that I think it is foolish to do this, but yes, you can disable thermal shutdowns.

Changing system cooling policy worked with my Acer Travelmate 5742ZG. It was shutting down in random occasions after starting some of the installed programs.

Not the answer you're looking for? Browse other questions tagged windows-8 cpu shutdown temperature overheating or ask your own question.

6
CPU Temperature required for auto-shutdown
1
Do modern GPU/CPU's contain a fail-safe for overheating or is it in the BIOS?
0
Laptop overheating within minutes of start up
8
Wild CPU temperature fluctuations during stress test
1
Laptop shut down randomly when temperature is low
0
Laptop shutdown every 30min
0
CPU's overheat in computer A but not in computer B
0
My core 2 quad q6600 is 90c while in the bios (H/W monitor) (with intel stock cooler)
0
Windows 8 never shuts down completely
1
LENOVO Ideapad 700 15ISK Instant Shutdown Using GPU While Power Plugged In