I recently bought Asus S550CM VivoBook laptop. It includes 24GB SSD disk (used for cache) and 1TB sata HDD. It comes with Windows 8 preinstalled but since day 1 everything was not working fine. Since computer also comes with 8GB of ram and i7 CPU I would expect way better performance.

After blaiming it on preinstalled Windows I formatted everything and made a clean install - it wasn't any better. Afterwards I tried installing Windows 7 and it started to work even worse.

Then I started to investigate the computer and found out that SSD disk is performing very poor and after making a benchmark using HDTune I discovered that speed fluctuates all the time! While speed of sata drive is almost constant (about 105 MB/s) the speed of ssd drive fluctuates from 0 to 250 MB/s all the time.

During the last benchmark which you can find here: 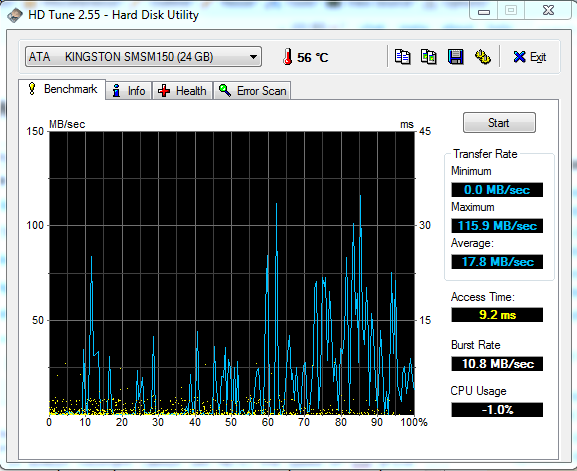 The speed did never rise above 115MB/sec. I am also getting errors that disk temperature is too high:

Any suggestions? Is this a hardware failure? How can I check what is going on (or whether it is just a software/misconfiguration issue) by myself before returning this laptop to customer service? I really want to try everything before bringing it back because this would mean that I would be without it for quite some time (not to mention time needed to backup and restore everything I configured).

This is probably a bit of a late answer for your issue - but as your question described my symptoms best, this seemed like the right place to put an answer down.

I also had a problem with bizarre fluctuating transfer speeds between SSDs - even for a single large file slowly ramping up from 1MB/s to about 60MB/s, and then going down again. Rather particularly, this was only slow in Windows 10, but fast under Linux, hinting at a driver problem.

The solution that worked for me in the end was to update the 'Intel Management Engine Interface'. It's under 'System devices' in the Device Manager. Just clicking on 'Update Driver' in the Driver tab completely fixed this for me - giving me a fairly stable 290MB/s.

Not the answer you're looking for? Browse other questions tagged hard-drive performance ssd or ask your own question.

7
New SSD, is the MBR broken? DISK BOOT FAILURE
18
Windows is very slow with my new SSD
2
SSD works slow under Windows 8
7
My SSD has extremely slow write speed. Any ideas what could be the issue?
0
How to switch from 256GB to 500GB M.2 SSD on a new Windows 10 laptop?
0
Slow IO Operations but Benchmark Says SSD Fast