How can I open notepad as Admin only using Win + R window?

If I open Win + R window and type notepad, then notepad opens.

How can I open it as admin the same way?

Run Once as Admin

The command syntax you want to use is:

NOTE: Designating the machine name is optional. It works like this too:

Substitute administrator for the account name that has admin access. You will need to authenticate using this process.

As @EBGreen suggested in the comments, you can save the credential on the first execution and avoid reentering it on subsequent calls. This option only lasts for the existing logon session:

You can also set it so that all programs run in admin mode. This is typically not recommended as UAC exists for a reason, but if you're so inclined follow the steps here:

As far as I know, this task will be started with Admin rights if it is started using

+R when UAC is disabled 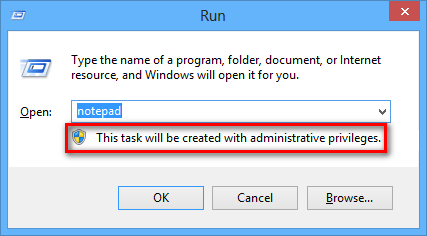 Anyway, you can do the same if you press

If you don't mind using a third party program, there are several programs named elevate.exe written by different people. These programs work (mostly) like this:

and then a UAC dialog pops up. Confirm it and your notepad has admin privilege.

The runas method often suggested has a major problem - it requires the use of a different account (Administrator), with the associated different profile. Administrator also happens to default to disabled. Running as any other standard administrative account actually uses the UAC-restricted token, defeating the purpose.

It is possible to elevate as your current user purely through the command line without third-party tools, though it's a little more complicated. One way is through the PowerShell Start-Process commandlet. The full invocation is:

Shortening it, we can get:

Running it from the command line, or from the Run dialog:

It's also possible to save a script that can be run simply as elevate, like in AgreeOrNot's answer - which, again, doesn't require any third-party tools.

I have another solution for you.

This will automatically open notepad (or any other programs windows searched for) as admin.

This doesn't quite answer your exact question but you can open notepad as admin by doing the following:

There is a work around solution for this in Microsoft forum. copy paste below lines to a notepad and save it as sudo.cmd and place it in the system32 folder

Hope this will help you.

my case host file is read-only

and need to remove the checkmark on read-only on properties of my file.

The Simplest Way I know to do this is to Right Click on the Normal Desktop Shortcut for the program, Choose Properties, Choose compatibility, Click off the "Run This Program as Administrator" then (if you choose) click "Change Settings for All users" This takes care of it and stays that way.

Not the answer you're looking for? Browse other questions tagged windows-7 windows windows-8 or ask your own question.

3
How to get Notepad++ to open files properly in Windows 8?
12
using "runas" with "Administrator" account versus other admin accounts
2
Notepad++ open in same window position and size every time
15
Can Notepad++ be made to open file links in itself?
2
How can I open a file with Notepad without permanently associating its extension with Notepad?
2
Removing the "Open in new window" context menu item without disabling the Win+E shortcut
1
I created a new windows user but cannot open notepad?
4
Powershell window does not open in same position where I last closed it