iTerm2 shows up on every Space. How to keep it from doing so?

For some reason, iTerm2 windows show up on every one of my "Spaces" (aka Desktops). Right clicking on its icon in the Dock and looking at "Options" reveals "Assign To: None", just like every other application. I can't find anything in iTerm2's settings that determine this behavior. How can I make it stop?

I got stuck with this as well and finally found it.

Preferences - Profiles - Window and towards the bottom there is a spaces drop down you can set.

I've been having the absolute opposite problem of this post. I've rebooted and my iterm settings have the hotkey window set to every space. Anyone else encountering that?

edit: It turns out I needed to go into the dock > iterm > options > (assign to) All Desktops

I think this setting was reset after an os update.

I am not so sure if we had suffered from the same problem. My problem was: when switching from one desktop(workspace) where iterm2 resides to another desktop ( where I may want to check some documentation or browse web), iterm2 always shows on top of the new desktop and covers the application on the new desktop. This is annoying in a sense that whenever I want to switch to another desktop, I must want to use something on that desktop(which is definitely not iterm2 as iterm2 is on my current desktop) or I just want to have access to the desktop. And when iterm2 follows, it just screws my will and I need to manually hide or close it, which can be really annoying when you do the switches thousands of times a day.

And the solution to this is actually quite simple. According to my observation, as long as the iterm2 is not on the second place of the application switching list(the list that shows up when you cmd+tab), the annoying behavior doesn't appear. So what we need to do is to exclude iterm2 from the switching list. And there is a nice option to configure this in iterm2's preference panel, under the appearance tab. 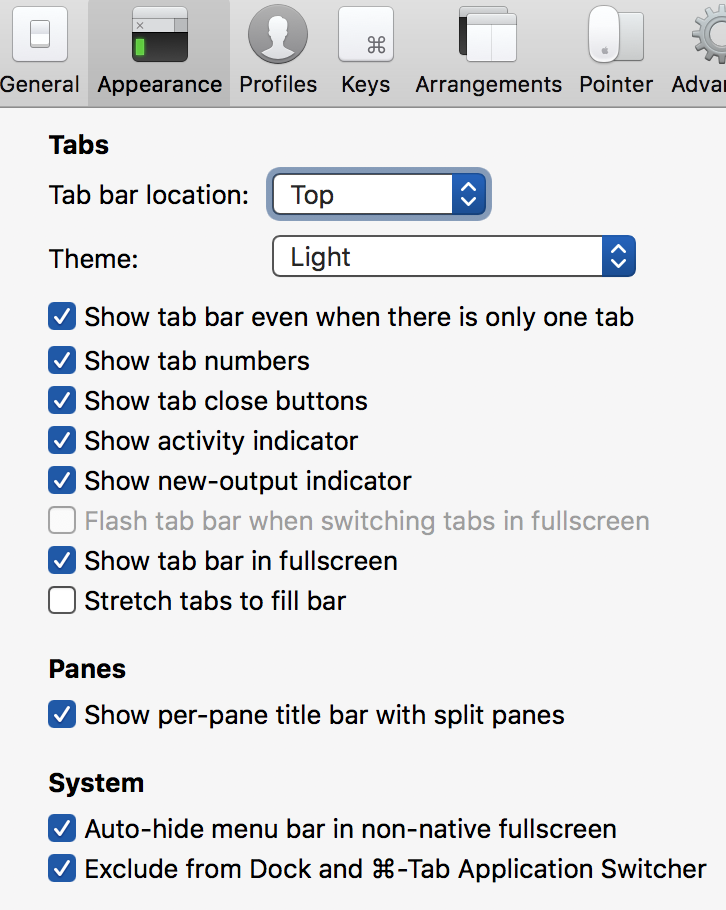 And the checkbox on the bottom most is what we want!!!

I just found out the answer now and I am so happy that I finally figured it out! I had been annoyed since 2013.

Following worked for me go to menu > iTerm2 > Preferences... OR use shortcut command,

let me know if it didn't work we'll try to find something together, And Good Luck

Not the answer you're looking for? Browse other questions tagged macos iterm2 or ask your own question.

0
iTerm2 shares the same instance across all macOS workspaces

16
How can I find an OSX application that is running but whose window is not visible?
4
How to create iTerm2 color schemes?
0
How do I enable setting tab colors on iTerm2?
17
Rename Iterm2 tab from within tmux
3
OS X: How to give different icons and titles to simultaneously running instances of Firefox
7
Scrolling up in iTerm2 shows previous Vim sessions
25
How can I prevent the iTerm2 hotkey window from losing focus?
0
Open minimized window (deminimize) with keyboard shortcut in macOS Sierra 10.12.5