Using Windows Explorer under XP I see some of my files have green filenames. When I try and copy one of these files I get an error reporting Access denied. The My pictures folder also appears with green text and I have a large number of photos from family holidays I don't want to lose.

I need to backup these files as I'm changing laptop soon.

We use SafeBoot to encrypt our hard drives but I don't think this is the problem as it allows me to copy other files to removable media with no problems.

Has anybody come across this before and how can I resolve this? 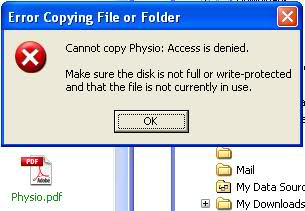 Because of the unique nature of encrypted files, different results can occur when moving or copying encrypted files between locations. For example, when copying an encrypted file from a local machine to a server on the network, different results of the copy operation will occur depending on the operating system being used on the server. In general, copying a file will inherit the EFS properties of the target, but a move operation will not inherit the EFS properties of the target folder.

The Windows XP Professional client contains some enhancements in the area of copying encrypted files. Both the shell interface and the command-line now support an option to allow or disallow file decryption. When an encrypted file is copied to a target location that does not allow remote encryption, the user will be prompted with a dialog box that allows a choice of whether or not to decrypt the file.

Decrypt the drive, image/copy the partitions, encrypt the new drive.

You have to decrypt the file (right click/properties/advanced/uncheck encrypt) but you are likely to get an access denied error if this file was encrypted on another computer.

If this happens, and you are on Windows 7, and MS have not fixed this since I wrote this response in Dec 2010 (feeling bored), then the only way to decrypt the file is to do it on the very same computer and user that encrypted the file in the first place. If you don't have access to the original computer then start begging MS for a hotfix...

Not the answer you're looking for? Browse other questions tagged windows-xp windows-explorer or ask your own question.

17
What does a blue filename in Windows Explorer mean?