How can I easily display *all* currently running Metro apps in Windows 8?

What is the best way to list all currently running Metro apps in Windows 8, included those which have been minimized by dragging them down to the bottom of the screen?

Initially, I assumed the "Switcher" bar on the left hand side provided a convenient way to see all Metro apps; however, it now seems that any apps that are minimised do not appear anywhere except the Task Manager. 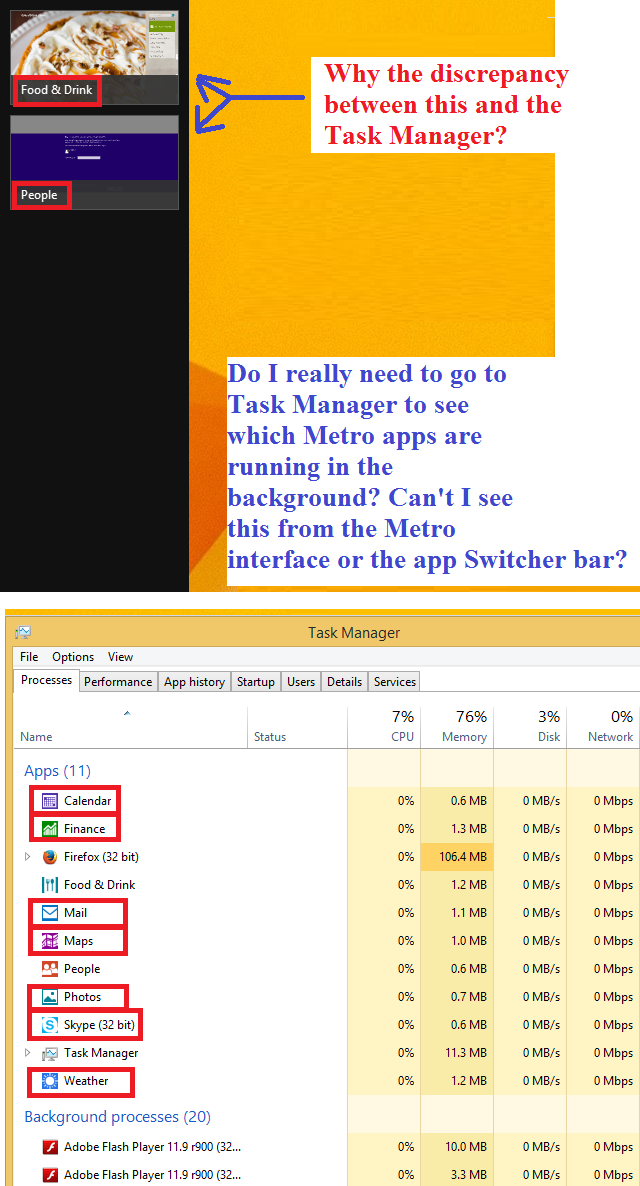 In the Metro interface, running apps have the same icon as ones that are not running (correct me if I'm wrong). Add to that the fact that minimized apps do not show up in the Switcher bar, or even when you alt + Tab or Windows + Tab, and you have a recipe for confusion.

Do I have to rely on the Task Manager to find apps that are running in the background? What an astoundingly terrible operating system this is. No wonder recent statistics show the majority of Windows 8 users never use the Metro UI or run any Metro apps.

Any advice would be appreciated.

In the past (before the Windows 8.1 update), dragging an application down from the top would completely close the application and remove it from memory. In Windows 8.1 update, that has changed. Now when you pull an app down from the top of the screen it is removed from your list of currently active apps and put to a system sleep mode. In this state the app is not sucking resources (or just very little). But if you decide to open the App again it will open much faster and continue from where you left.

I also do not like this, so i close the Apps in Windows 8 with Alt+F4.

Not the answer you're looking for? Browse other questions tagged windows-8 modern-ui or ask your own question.

2
Windows 8 Modern UI Apps - How to Snap at center
3
How to show desktop apps in Windows 8's Switcher?
5
Is it possible to use Metro apps in “desktop mode”?
9
Make the task bar visible at all times
9
Metro apps on Windows 8.1 crash on start
4
Windows Metro Apps Minimize themselves when Launched
3
Problems With Windows 8.1 Metro Tiles and Apps
1
Windows 10 Bing Metro UI apps no longer open (e.g. News, Weather, Sport)