note- I have solved this and will post my answer, though other answers are welcome of course.

I have a VBS file, the contents doesn't matter but it acts as a wrapper and runs another program. The point is I want to change the icon of the VBS file to anything e.g. to the icon for windows calculator.

As a demonstration, I have a directory C:\blah that has blah.vbs and blah.lnk I try to drag either of them to the taskbar, but I get a Wscript icon.

I've tried shift-right clicking the wscript icon, going to properties, and choosing another icon, and clicking apply, but the taskbar icon doesn't change.

See below, I told it to change to the icon for That pinned vbs file to \windows\system32\calc.exe and clicked apply - notice at least a calculator icon in the properties window, but the taskbar icon has still not changed. 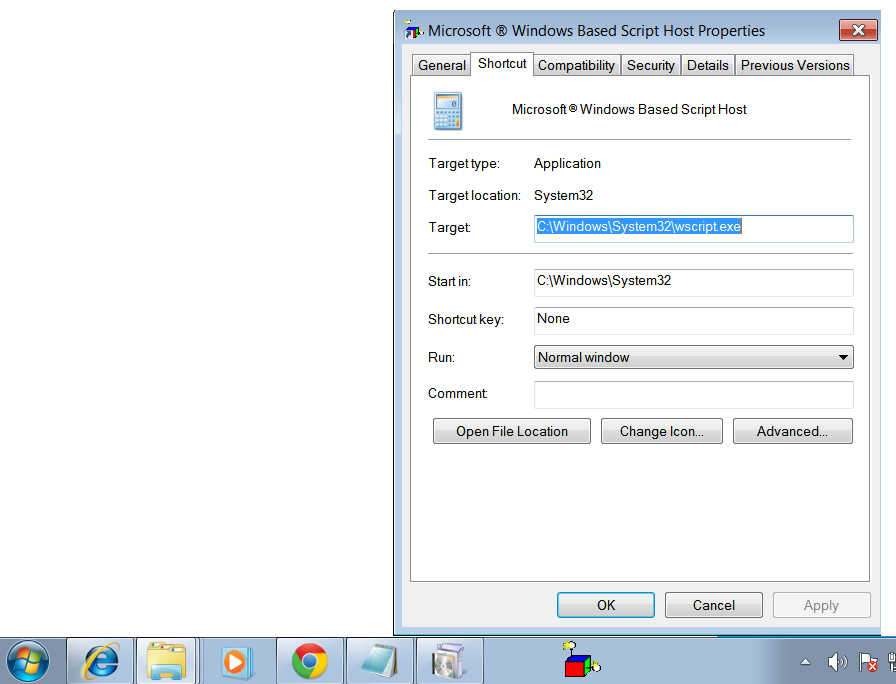 I am able to right click the taskbar, choose toolbars...new toolbar...and I can change the icon of a particular shortcut, but when I drag it , the icon doesn't stay for the taskbar.

1)Make a shortcut to Wscript.exe

2)Set the target adding the vbs file as a parameter e.g. c:\windows\system32\wscript.exe c:\blah\a.vbs

3)Drag the shortcut onto the taskbar.

You could change the icon between steps 2 and 3, or after step 3.

You can drag multiple on, but you must ensure that you change the target of the shortcut.

If you try to drag the exe itself, it's a bit of an issue 'cos you're not changing the target of the shortcut. And anyhow since dragging makes a shortcut anyway, it makes sense to drag a shortcut.

And you can get that path by shift right clicking a pinned icon after all its windows are closed, and you get a menu with properties which is the shortcut properties, and in the general tab you see the location of the lnk file - the directory it's in being that one I mentioned.

I'll post another answer summarizing this by just stating what to do.

(from what I can tell at least!) anything you drag onto the taskbar, is a shortcut. So whether you drag an EXE, or a VBS or a LNK file, then it if comes up, it comes up as a shortcut on the taskbar.

Knowing that, means there's a lot less messing around 'cos a lot less variables to try when things go wrong.

You can test that, by moving the mouse over to one of the pinned icons, it doesn't matter that a menu comes up when you hover. Then shift right click.
If it says restore, move, size, minimize, maximize, close) then Click Close(which will just close all the windows of it if there are any). if the icon has gone then you didn't choose a pinned icon, so shift right click a pinned icon. And you get a menu whose last option is "properties" and there's a shortcut tab. So it's a shortcut. And that can prove that it is a shortcut.

Any attempt to drag something on from a network drive, fails (this doesn't matter even if you have a VBS file on a network drive you can still get it to run from the taskbar no problem) That's just a peculiarity worth knowing.

or if you want to copy and paste the whole thing.

Why the path says "internet explorer" is anybody's guess, but that's where the taskbar shortcuts are

If you drag a a VBS file, it wants to know whether you are associating it to an already pinned shortcut, chrome or notepad, or if you hover onto the taskbar generally it says "pin to wscript.exe" and it will create a shortcut to wscript.exe on the taskbar, and if you look at the shortcut of the target you see it will has created it with no parameters!
And if you click the wscript.exe shortcut on the taskbar it brings up "Windows script ost settings" which is what happens when you execute wscript.exe so you'd probably want to add a parameter so the target is like C:\Windows\System32\wscript.exe c:\blah\a.vbs to execute the vbs file

If you want to have multiple icons on the taskbar, you'll find that if you drag wscript.exe to the taskbar (or a shortcut to wscript.exe or blah.vbs), it makes a wscript lnk the first time, but the second time it doesn't. So what you have to do, is change the target of the shortcut to something different from the existing one, before you drag it.

This is the case for anything, so if you have a shortcut for calc.exe, you drag it onto the taskbar and you get an icon for calc.exe there, it works. If you drag the shortcut or further calc.exe shortcuts to it, they don't go on there, you get a no entry sign. To get it to work, just change the shortcut target slighhtly e.g. change c:\windows\system32\calc.exe to c:\windows\system32\calc.exe dfdf Then it will go on the taskbar. You can change the icon too.

With wscript, if you want an icon for a.vbs then do wscript a.vbs, as target, drag it on. Do one for wscript b.vbs (by making a shortcut for wscript and changing the target and dragging it on).

Not the answer you're looking for? Browse other questions tagged windows-7 taskbar icons or ask your own question.