Now, in OSX, I can't seem to find any rhyme nor reason to how OSX behaves in the same situation. When I'm in a list, if I type a letter, it moves the focus to an apparently random item (most likely not the first item) starting with that letter. If I hit the letter again, sometimes it doesn't move at all, sometimes it moves to another random item starting with that letter, sometimes it just moves to another random that either doesn't start with the letter or doesn't even have the letter in its name (which proves it's not trying to do substring matching).

Example (from Word for Mac): 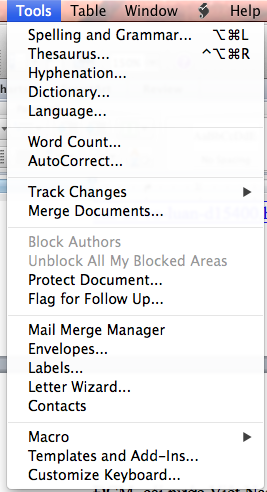 Say I want to navigate to the Language item. The first time I press L, it moves focus to Labels. Second press, it moves to Macro (!). Third press and beyond, it doesn't move.

How do I make it work like Windows, as described above?

Not the answer you're looking for? Browse other questions tagged windows macos or ask your own question.

6
iWork '09 Keynote: is there is straightforward way to 'dim' and 'highlight' each item in a bullet list?
3
How can I stop Pages from bolding/italicizing ordered list item numbers/letters?
0
Switching between taskbar tasks sequentially
1
Computer freezes unexpectedly, can't figure out the cause
9
How do you remove a single item from the “Open Recent” menu on Mac OS X?
0
Searching for the folder in Windows Explorer?
1
Moving Applications Between Multiple Displays
115
Windows 10 - How to move window to other monitor by using keyboard shortcuts?
2
Is there a way to remap Command + H (hide window) for all applications without installing a proprietary tool?