I'm currently doing a spare-parts build to put a media computer in the living room, and having a devil of a time getting my Rosewill RNX-6300 wireless card to connect to my network.

I'm trying to set it up using Windows as opposed to the proprietary Rosewill software -- the Rosewill software is a little over my head. It can find the network fine, but when I try to connect, I don't get the password prompt -- it moves straight to "validating identity," scans, and then says "Windows was not able to find a certificate to log you on to the wireless network Foo."

The maddening thing is that the card was working fine a week ago, in the same box, using the same OS. I pulled everything out, swapped out the motherboard, and reinstalled Windows on a freshly wiped hard drive, and now I can't get it up and running again. Suggestions?

I've taken several runs at it, including attempting to manually change the settings for the network to include WPA-PSK and AES and the password, and I'm a bit worried that I've totally boned everything. 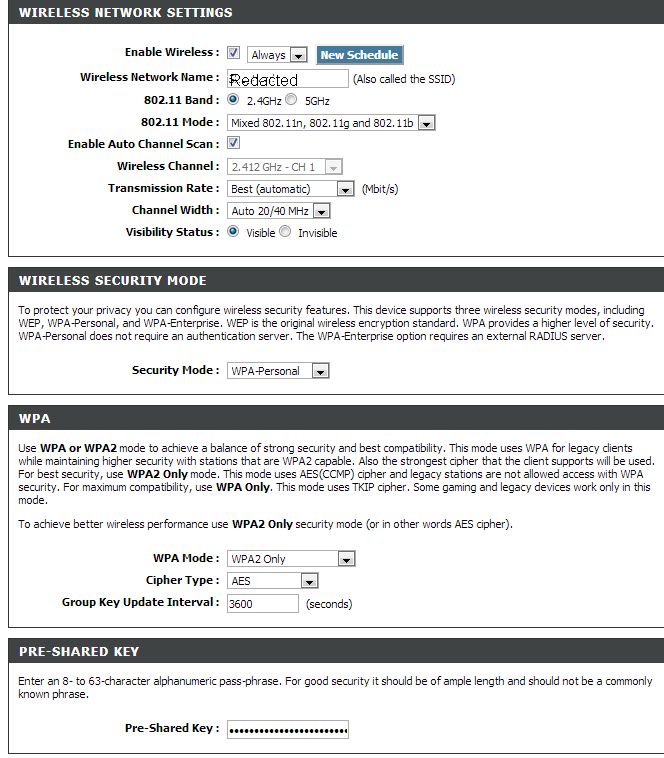 ipconfig/all results from the XP box:

Again, this card was working on this network a week ago. I can't figure out why I can't get it up and running now.

There's no WPA2 on the card, just WPA and WPA-PSK: 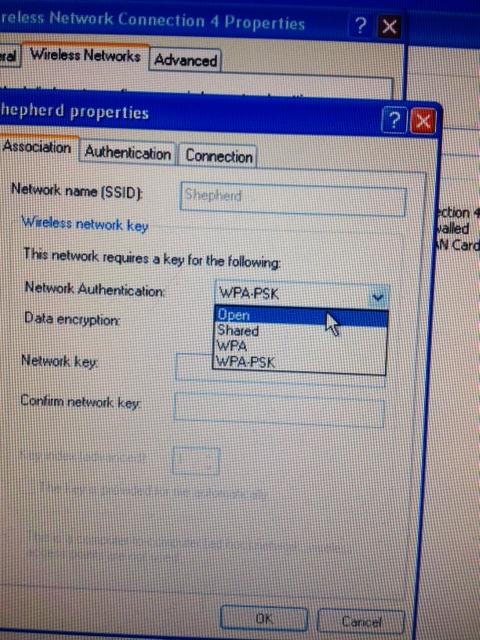 WPA-PSK was the only setting that would let me enter a network key. I had TKIP and AES as options there, but cipher type is AES on the router, so I chose that.

(I tried TKIP later, when this didn't work, with the same results as described below.)

So I set it to WPA-PSK / AES and entered my security key. It's mixed letters and numbers, 32 characters long.

No joy. Still "waiting for reply" in the main screen, and "cannot find certificate" on the pop-up.

And if I try again and return to the settings again, it is reset to Open/AES. It also re-enables 802.1x in the Authentication tab if I've deselected it with WPA-PSK. It also reshortens the password. 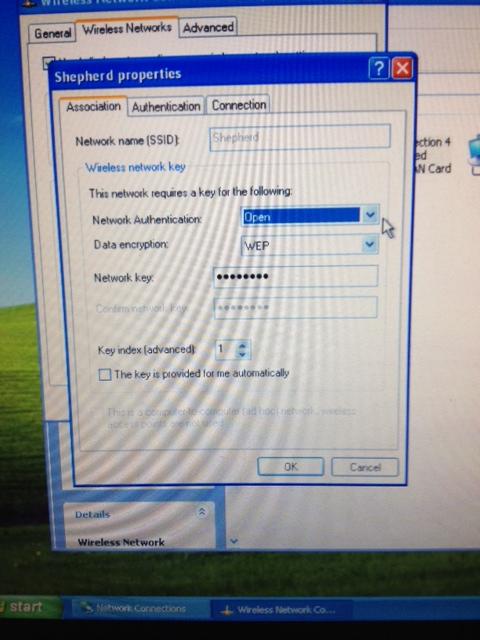 I have no idea how I blundered into getting this working in the past. I am, as you can tell, far from proficient at this. It was working before, though. What am I getting wrong?

from your screen shots what I am seeing is you chose wpa2-only for your encryption on your router and you are setting your ethernet card to wpa-psk. You need to change the routers encryption to just wpa or wpa-psk. your card does not support wpa2 if i am reading your dropdown list correctly on your card.

You can try stepping up encryption to wpa/tkip, wpa-psk/aes, wpa-psk/tkip however the settings must be the same on both your router and your card. That said you cannot have wpa set on your card and have wpa-psk set on router.

Write back your results so I know if you got it fixed.

9
How can I configure my wireless network for the strongest security?
1
How do I get a Wireless N PCi card to connect to a wireless G router?
1
Can't connect to WPA-protected Wi-Fi network with Vista Laptop
1
Enabling WiFi password, drops network into 802.11a instead of n
3
Wireshark on WPA2-PSK [AES] not decrypting
1
Windows 7 - Cannot connect to university WPA2/PEAP wireless network
4
Does increasing the complexity of a PSK passphrase mitigate the risks of WPA-TKIP?
10
What does WPA/WPA2 really encrypt?
3
Not receiving good speed on a particular Wi-Fi network