How would you go about the following: 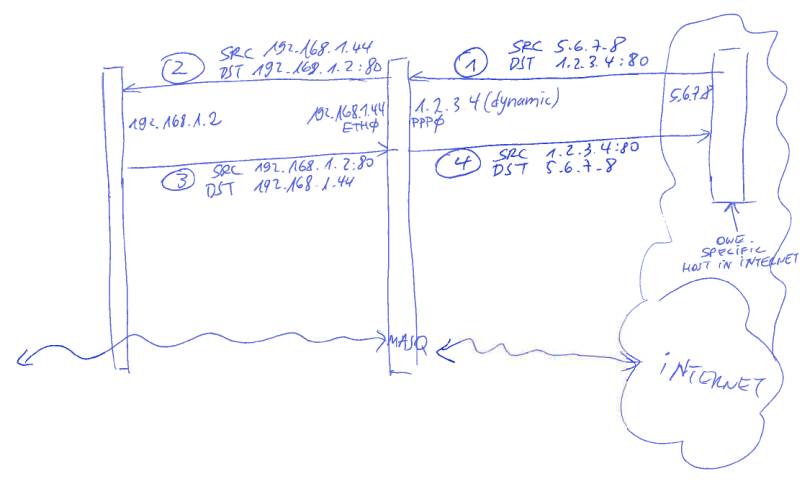 Note: Internet access should work at all times using the classic MASQUERADE action in the nat table's POSTROUTING chain.

I don't know how you would call that specific method to NAT, and I don't know if it's possible at all (or with netfilter).

(Don't ask why. But if you do: it's got to do with the routing table at the 192.168.1.2 host, which doesn't have the default route on the interface that I'm showing here, yet I'd like to have it available from anywhere, and I believe this is the only way to do it; by mapping the internet access to a connection/network that is directly attached, therefore overriding the routing table. I hope.)

So you have no default gateway on 192.168.1.2, and presumably cannot specify one. So traffic outgoing from here to random hosts on the Internet will not know where to go.

It's probably going to be easier and less of a headache to do something like a proxy or VPN tunnel if possible.

To address performance concerns, if you aren't concerned about security on your LAN, you don't have to enable encryption - and you can set the authentication to be a password which you include in a boot script (though you do need a server cert at the very least) and just have it be a straight tunnel.

You might also be able to get a LAN side "internal only" proxy to work in this situation if your service can be put behind one.

Not the answer you're looking for? Browse other questions tagged networking routing nat or ask your own question.

0
Network problems that might be related to NAT
1
Internal working of rules in forward chain for NAT
2
How can I SSH into home computer from internet
0
How to I configure iptables for both IP masquerading and firewalling at the same time?
0
Routing traffic from VPN clients to internet (Tincdaemon+Ubuntu)
5
Linux Netfilter: How does connection tracking track connections changed by NAT?
0
Why SNAT works by setting one rules in tables without the rules in PREROUTING chain?
0
NAT configuration with dhcpcd.conf?