Photoshop Technique for Such Effect - How Was It Done?

If you take a look at the DevDays logo, or the Graphic Design presentation from FOWA, there are certain letters in the logos that are extended upwards or in some direction, such as the V and Y pictured below. I wish to attempt to mimic this effect in Photoshop. I have watched the presentation design video, but, as it's so fast, I wasn't really able to tell how the designer did it. Specifically, I would like to find out the easiest approach for accomplishing something like the extended letters in the second logo below. I'm currently thinking of somehow utilizing the clone patch tool, but I'm not certain how to obtain the desired result. 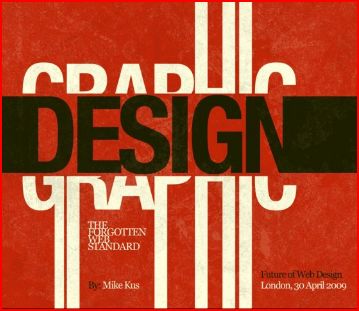 UPDATE: From the first answer, I have an idea - would rasterizing the text and then transforming it work as an alternative?

UPDATE #2: Thanks so much for answering my question! However, I just realized that I'm also curious in another thing about the Graphic Design logo: how was the word "graphic" separated so that "design" could be put in between?

This is no work for Photoshop. In Illustrator or Freehand, just choose "Convert type to outlines" and stretch the anchor points of the letter vectors up and down. It's vector work anyway. After you finish the design, you can rasterize it for web use, for print it should remain vectorized.

In my humble opinion, having watched the video, what the designer is doing, is selecting only a part of the letters, the part to extend/repeat, then he is copying it, and pasting it several times, to make such effect, nothing more sophisticated ;)

Since these are basic geometrical shapes, I'm guessing that even without copying several times, stretching the copied/pasted area is working too.

2
How to add a border to a shape in Adobe Photoshop CS2?
2
Sketch effect in Photoshop
0
Photoshop color effect
2
How to redo undone actions in Photoshop when other actions have been done
0
how to achieve fragment blur effect from paint.net in photoshop
2
How do I replicate the faux bold look without turning the resulting text into raster?
1
Layer/Shape Effect Inheritance in Photoshop
3
how to get "pressed on sides" effect on a leather texture in photoshop?
1
How can I remove all these holes in Photoshop?
0
Photoshop layers showing no effect on image