I'm running a web server for development on a Lenovo Thinkpad T420s, and I cannot connect to it from three separate devices (desktop, iPad, and phone, respectively).

The laptop and other devices are connected to a router running DD-WRT (desktop wired, everything else wireless). I've already determined the following:

Checklist for anyone having trouble connecting to a local server

In addition to the usual fixes, I've tried a number of other things:

Checklist for anyone who tried all the above things 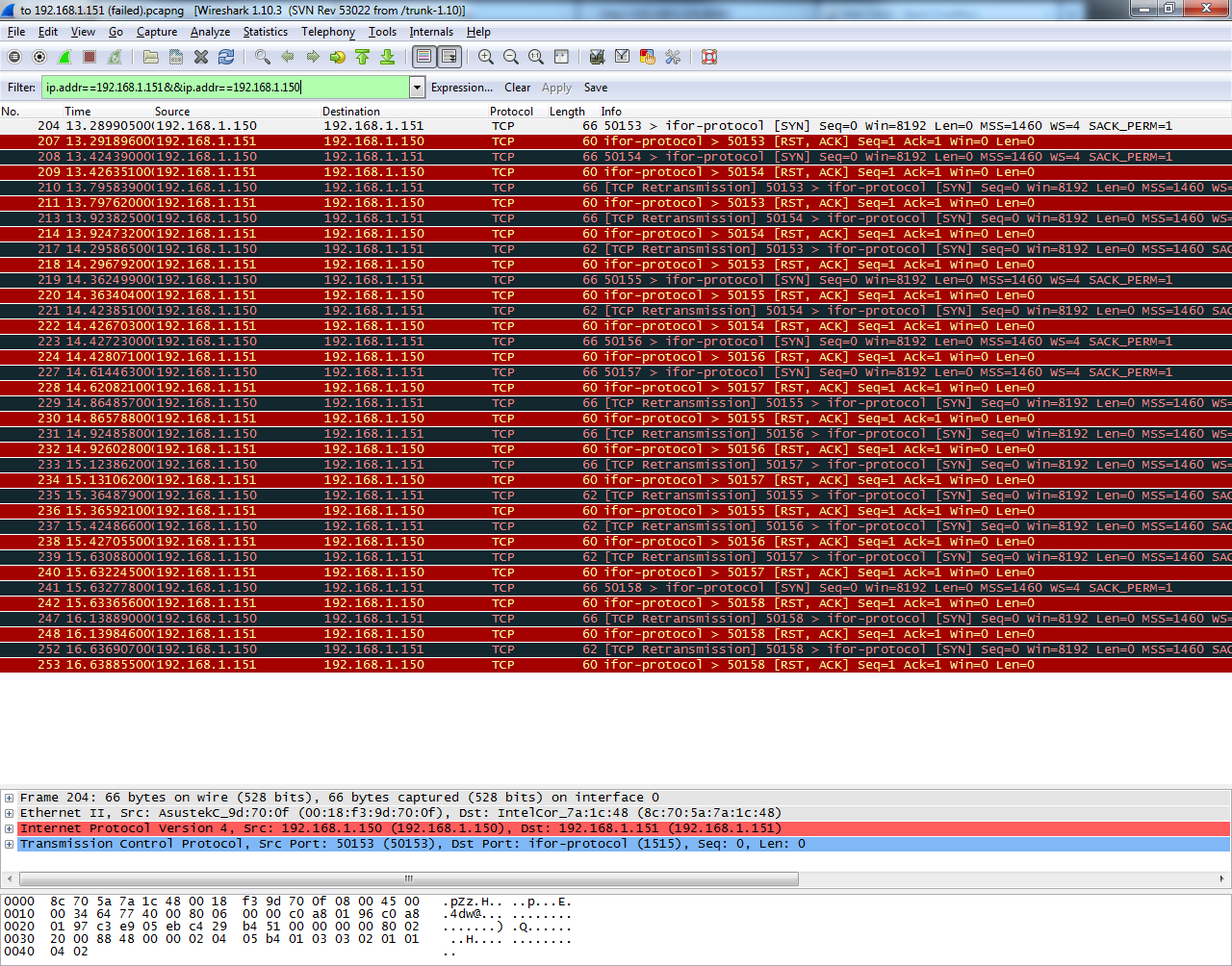 My question is twofold:

Any help on this would be very, very much appreciated. I'm running out of ideas!

Update: It works now, but no idea why. Hopefully this checklist will be useful to anyone else trying to access a web server locally.

Trying to interpret a packet capture can be somewhat intimidating at first, try to focus on the basics and ignore the more complex parts.

Edit: Just wanted to follow up now that you've added the packet capture screenshot. It's significantly more clear what is happening. One of the challenges with using a tool like wireshark is understanding what the protocols should look like. Since HTTP rides on top of a normal TCP connection, what you see here is a series of failures to setup a TCP connection on port 1515. The reason you don't see HTTP is that the TCP connection failed before the conversation between client and server could get that far. I'll walk you through it by packet number through the first two attempts:

A RST flag in a TCP conversation is a force close. It's more rude than a normal FIN flag that gracefully ends a conversation. This generally means that there is either a firewall blocking port 1515 or nothing is listening on port 1515. I see [RST, ACK] more commonly from servers that don't have a service listening on that port, whereas firewalls tend to just RST or black hole (no response) the traffic.

Now that it's working take another capture just so you can see what a successful connection looks like. It should be something along the lines of:

series of HTTP conversations riding on top of TCP ACKs

Not the answer you're looking for? Browse other questions tagged networking wireless-networking thinkpad windows-firewall or ask your own question.

3
Why can't I connect two computers via Remote Desktop?
1
How to lock down Win Vista Firewall for HTTPS only access?
2
Why is my Windows Firewall allowing connections from IP addresses other than which I specified?
0
Does a router limit a outgoing connection to a particular host?
1
Why does the Windows Firewall ask to unblock an application that has no incoming connections
0
Asterisk server firewall script allows 2-way audio from incoming calls, but not on outgoing?
0
Windows [not firewall] ignores incoming packets
1
Running Apache on Windows without administrator priviledge when listening only on Localhost
1
Shared internet connection is blocked by firewall
0
Setting up a reverse proxy without opening an incoming port (only an outgoing port) on the firewall