Fix Linux-made png file for use on Windows

There is a particular icon library that I really like from DeviantArt.

Now, I have downloaded the package that has the png files inside (I know the ico files are there, but I want the png files).

However, about my Windows 7 computer tells me that about 1/3 of the png files are corrupt. I usually use XnView to view the files, and it won't display the "corrupt" files. I've tried other editors and viewers and I get the same issue.

Now, the png package was originally designed for Linux to be an OS-icon-package for the entire system, so I figure the png files were built in Linux.

So, is there a way I can "fix" the "corrupted" png files for my Windows 7 computer? Maybe when the files were created there was some bit that was off-colour or something?

I have read in this thread that the "corruption" could happen during the extraction process. I did all the extraction with 7-zip. It was a zip containing a tar. I will try another extractor, but I don't think it will make any difference.

I think the answer might revolve around editing one of the beginning or ending bits in the binary file, but I'm not sure.

Okay, I fixed the link to the icon package... (the other one was fine) - but this new link is actually for the original package from DeviantArt.

It appears that the problem is that the tar archive contains symbolic links. This means that duplicate files are not written twice but instead linked to an existing file. This can be done for example with the ln -s command in Linux, and if you then create a tar archive in Linux, the symlink would be stored in the tar archive.

However, 7-zip barfs on symbolic links in a tar archive, and instead of handling it cleanly, such as making an identical copy of the linked file, it writes the linked file name as the content of the file. In this case, the file gnome-panel-launcher.png contains the actual image.

You don't really have much choice except for reporting this is a bug (but there's already a bunch of existing cases in their bug tracker and no sign of any progress) or finding an archiver which can better handle the situation. I tried WinRAR, which is what I normally use, and it could extract the archive without problem.

I have tried extracting the Tar archive in 7-Zip. There really is no problem with the extraction process. The problem is that Tar archives can have symbolic links in a Linux system, and these links are extracted as files in Windows by 7-Zip. 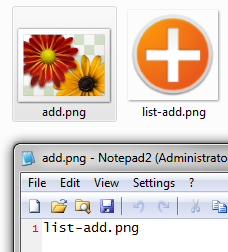 You can rename the symbolic link files from .PNG to .TXT for easy look-ups. But I would simply delete them away since I'd only be interested in actual images, and there's no need to have copies of the same image (even if Windows provides a symbolic or hard linking system of its own).

Not the answer you're looking for? Browse other questions tagged windows-7 linux png file-format or ask your own question.