I just bought a new laptop with Vista, but I cannot get on the internet with it. It seems a Vista edition without IE is released in Europe.

The shop is closed, so I cannot ask the provider who set everything up for me. In Vista there is a document file called Internet Explorer, but no .exe file.

I have had my emails imported to Outlook but neither the internet links in them and icons which should bring me to the internet get me anywhere - in both cases I get a box saying that the adresses cannot be reached.

What am I not seeing? How can I get on the internet?

UPDATE: things have been solved by downloading Firefox.

The inbuilt FTP tool should allow you to download Firefox, as detailed here

If you can find it, your problem is solved.

you can download the latest version Internet Explorer 8 for Vista from Microsoft.

or download the Firefox installer and install it on your computer.

if you don't like IE or Firefox, you can also install Opera, or Google Chrome as viable alternatives.

whichever program you install as your default web browser will then open the links you click in Outlook.

A bit too much for a comment, but we might get more people here with the same problem. I assumed the shop had just messed up by clicking away the browser ballot screen, or might have installed some unknown browser. How often would that happen? Well, I read on Ars Technica it will also be used for existing installations, if Microsoft's proposal is accepted by the EU:

EU Vista, XP users will also get to vote IE off the island

And it won't be limited to Windows 7 users; the ballot screen will be pushed as an update to current Windows XP and Windows Vista users.

I see some duplicates showing here in the near future then... 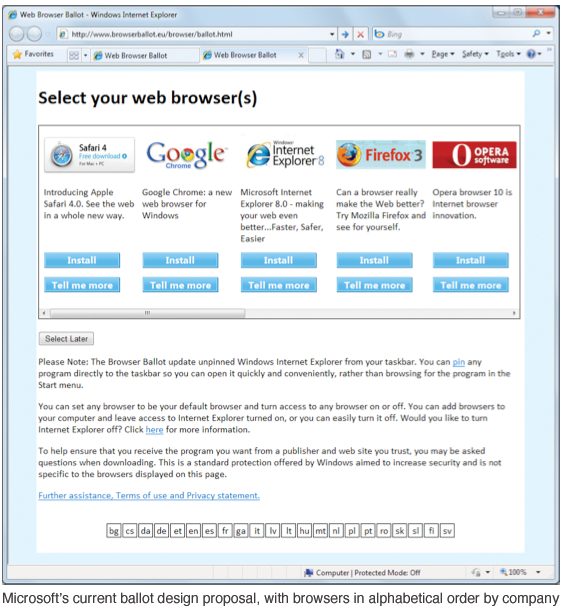 Update 2009-12-06: apparently, the order in which the browsers will appear will be random, and might no longer show within an Internet Explorer screen. The final version might get EU approval on December 15th.

Update 2010-02-23: Microsoft has announced that Windows Update will present the choice as of March 1st. An example can be seen at www.browserchoice.eu, but the announcement shows an additional introduction to that, and explains that even existing "pinned" Internet Explorer shortcuts will be removed (which luckely implies the browser itself won't be uninstalled)... Many more duplicates to expect here!

(I wonder how those who cannot install a browser themselves are now expected to select the best choice given the advertising slogans. And what if your second choice will actually make itself the default browser? I don't really like this push towards existing users: why confuse them, and what if a Super User already installed another browser at someone else's computer?I also wonder if all browsers are actually available in localised versions; changing "_en" in the URL into something like "_fr", "_de" or "_nl" will give the same list, partly translated, while "more information" then still links to an English page. But: this might not be the final version. Even more: maybe it's just a demo, and not the real thing. I'm quite curious if one could really skip this step during first installation.)

You can run this FTP script to download Firefox as highlighted by @Phoshi:

2
Internet Explorer is uninstalled, no other way to get online; What do I do in order to re-download IE?