How to shut down a Windows 8.1 Pro computer in remote session?

When you right click the Windows 8.1 "start" button, you get some options to quickly perform common tasks, e.g. to shut down, reboot, or put the computer to sleep.

But when you're using the computer in a remote session, all of the shut down options are removed. You can't shut it down, you can't reboot, and you can't put it to sleep! All you can do is disconnect from the remote session.

What's the reasoning behind this? Are there security reasons for why Microsoft has decided to remove these options from the "new" (reinvented) Start button? Have they overlooked this? And can I somehow add these options back, e.g. through some security policy edit maybe?

Besides the paranormal way of starting the Command Prompt (cmd.exe) and using the shutdown command, are there any other normal (user friendly) ways to shut down, reboot, or put the computer to sleep graphically (point and click)?

This will also remove the Disconnect option from the Shut Down Windows dialog (i.e. Alt+F4).

This is quite the opposite of what I wanted. But is there perhaps another set of policy rules that will allow me to add the options Sleep, Shutdown and Restart to the Shut down menu on Start button?

I ended up creating some shortcuts to the shutdown command on the remote desktop.

I have them sitting in the upper right corner of the desktop. Hopefully I won't trigger them accidentally. But if I do there is the abort command. Here's what it looks like.

It would have been nice if I could add these shortcuts to the Shut down menu on the so called "Start" button. But this will do the job. It's a pity that it's not as easy as changing a group policy rule.

The reasoning behind this is if you are working from a remote computer and you shut it down, how do you turn it back on? It is a "Safty" feature to prevent a remote computer from becoming in a unuseable state.

As for work arounds, shutdown really is the best way. You can always make a shortcut to the program with the command line arguments /s /t 0 included if you want a icon to do it. Or if you really must have a GUI you could have your shortcut be to shutdown /i, however I think that GUI is a lot more "abnormal" than typing something in the command line.

(One thing you may want to check, I don't have a windows 8 box in front of me to check, but from inside the RDP session do a Ctrl-Alt-End, this sends a Ctrl-Alt-Del to the remote computer and there may be a shutdown command from the menu that comes up)

Windows 8 makes it less easy to click shutdown or restart through a Remote Desktop session. If you:

To shutdown through the UI, you must drop to the desktop (Windows key + D) and type Alt+F4 to reveal a shutdown dialogue box.

However, this assumes that the desktop actually has the focus and no other windows are open otherwise, Alt+F4 will simply close the active window.

So if you have multiple windows open, you’ll need to minimize them all first.

Switch to the desktop and press AltF4. In the dialog that shows there will be a shutdown option. 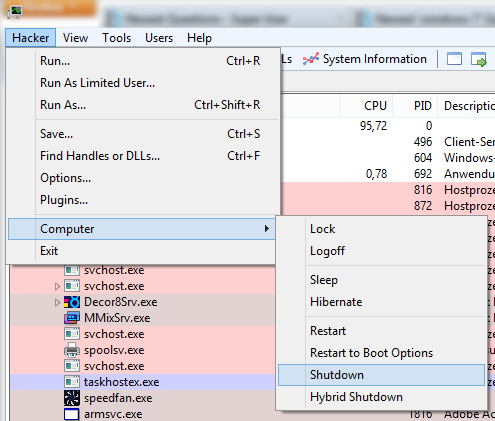 The way I do it is open a command prompt and to shutdown I type:

Cntrl + Alt + End Then click on the power button you have options to restart and shutdown with no command line or funky shortcuts.

Not the answer you're looking for? Browse other questions tagged remote-desktop remote windows-8.1 start-menu start-screen or ask your own question.

0
Shut down and restart computer from search