Is there way to enable more than 4 GB RAM in 32-bit Windows OS?

Someone told me that MS Windows 32-bit doesn't support RAM larger than 3 GB.

I tried what Mr. Wonsungi advised me but whenever I check this option:

Enable support for 4 GB of RAM

I get the following error:

There is no "CLSID" in my registry, I don't know why!.

You can use PAE, but it's not nearly as good as just going 64 bit. Check this MSDN Page.

Read this: Dude, Where's My 4 Gigabytes of RAM?

For general info, there is also this overview on memory limits per Windows edition:

Recently, a group of programmers have released a kernel patch for Windows 7 to allow the usage of more than 4 GB of RAM under Windows 7. Click here to download the patch, or view more information about it. The patch basically modifies the Windows 7 kernel to be more like the Windows Server 2003 Datacenter Edition, which is compatible with up to 8 GB of RAM under 32-bit mode.

The patch allows you to extend the PAE well into 8 GB of RAM under Windows 7 32-bit. For more information about why Microsoft implemented this technical limitation, see this article.

Note that individual processes will still be limited to 4 GB even if the system can access more... Although if you had 8 GB of RAM, then at least you'd still have another 4 GB for other processes ;)

The answer to this question is really "depends on who you ask".

Some say to use PAE, which will allow you to address higher than 4GB BUT Microsoft will NOT let you on many of 32bit versions of Windows.

http://msdn.microsoft.com/en-gb/library/aa366778(VS.85).aspx
The following table specifies the limits on physical memory for Windows 7.

Physical 4GB limit, period. It's a licensing issue. There might even be a "hack" floating around to let you use more than 4GB, but I don't remember.

Please do note: Vista and Windows 7 on 32bit will report the TOTAL PHYSICAL RAM you have in System, but it will ONLY use 4GB of it. So, shoving 16GB in a computer running 32bit Windows will only use 4GB ACCORDING TO MICROSOFT even though "System" control panel will show 16GB. Windows 7, Vista, and XP 32bit will only use 4GB of RAM, its a fact. However, certain versions of Windows Server WILL use more than 4GB with PAE enabled.

For those going "your wrong PAE will allow you to to use more than 4GB", yes I agree, however, Microsoft says that you can only use 4GB on most of the 32bit desktop OS so if you feel that page is in error send them an email or call them to complain.

As far as I know, 32-bits Window can use memory up to 64 GB, and can be "hacked" to do so.
This hack is fully described here: Licensed Memory in Windows Vista.
(Note: I do not advice anyone to actually try it.)
It also makes interesting reading, since it explains very well all the concepts involved.
I reproduce below his proof-of-concept image. 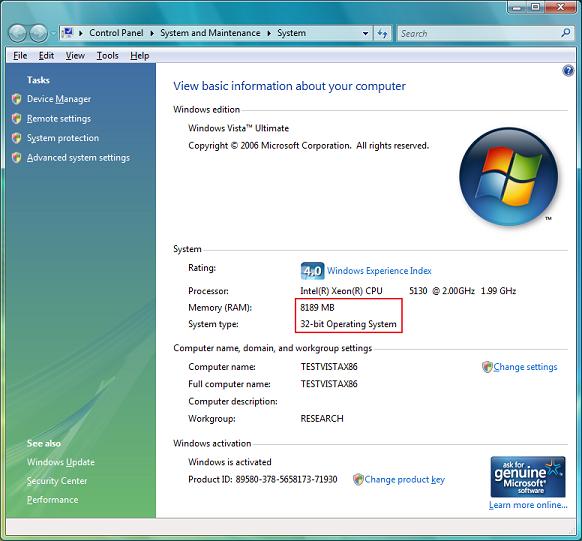 Someone told me that MS Windows 7 32-bit doesn't support RAM larger than 3 GB.

Someone is wrong. 32-bit Windows desktop operating systems support up to 4 GB of physical memory. However, due to the hardware limitations of the x86 architecture, only 3.5~ GB are available for the OS if 4 GB are installed.

Just curious, can you give some examples of programs that don't work on 64-bit windows? 64-bit Windows since Windows XP has excellent backwards compatibility with 32-bit programs. Check the 5th question on this page: http://windows.microsoft.com/en-US/windows-vista/32-bit-and-64-bit-Windows-frequently-asked-questions. Take Microsoft Office for example, it's all 32-bit, but runs great on 64-bit Windows.

The only time you wouldn't want to move to 64-bit is if you have hardware that doesn't have 64-bit drivers. Hardware drivers must match the OS platform.

This patch works or so it seems.

Before the patch I could use 3gb out of 4gb, and now all 4gb is accessible. 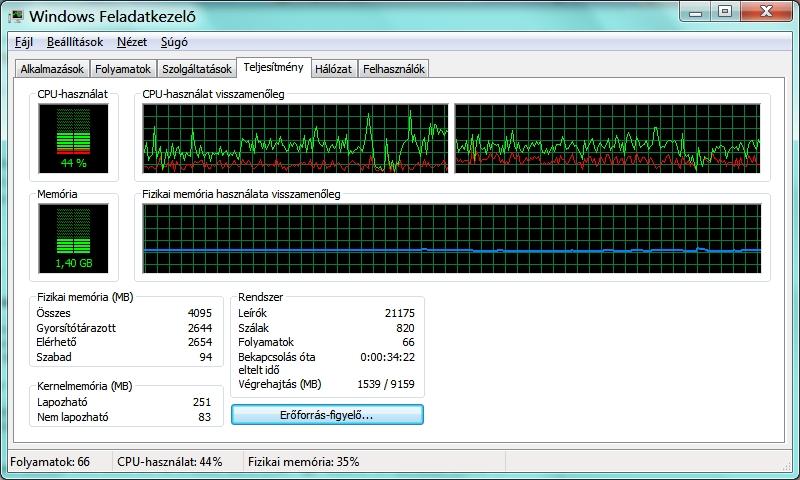 The link below sets out a manner to

in a very clear and straight forward way

Which worked for me.

Not the answer you're looking for? Browse other questions tagged windows-7 windows-8 memory 32-bit or ask your own question.