Shortly after a file download via Google Chrome completes, almost all programs completely freeze into Windows' infamous "Not Responding" state for up to 5 minutes, affecting Explorer particularly badly, but some programs act strangely. For example, Google Chrome is completely interactive (opening tabs, browsing cached web pages, etc) but can't browse to new web pages, iTunes won't open but will play the remainder of the current song but not the next song in the playlist, etc.

Eventually, the issue resolves itself and the programs recover but I've found that the duration of the issue is significantly lower if you cancel the file download, relative to how quickly you react.

This issue occurs when with any file type (.ZIP, .MSI, .MSG, .PNG, .URL, etc) of any size from any source (Dropbox, SourceForge, Imgur, even tiny and locally-generated BLObs created by my own Chrome extension, etc). However, I'm not entirely sure about the location (C:\Users\User\Dropbox\, [USB]:\, etc), as I don't often download things to seperate drives.

Also, while I was capturing some of these screenshots via Greenshot and uploading them to this post the issue kind of happened again - Superuser rejected the image saying it couldn't be opened, iTunes played up as described above, Explorer was unstable but not completely frozen as usual, etc. Although, I use Greenshot extensively and have done so for months and this is the first time that this has happened.

The exact same issue used to occur on my work PC which has exactly the same software configuration but I've reinstalled Windows on it many times for varying reasons and it no longer occurs.

As this issue is so inconsistent, I haven't been able to prove whether the issue is caused by Google Chrome itself or my system configuration (this used to happen on my work PC too but it doesn't anymore).

I've had and disproved the following three theories:

However, my current most promising theory is that it's related to Windows Search or Windows indexing stuff, as I immediately checked the Event Viewer after it happened and found the logs included below as screenshots. I haven't been able to find any useful resolutions for these errors yet.

17/12/2014 11:30 AM: This just happened again while downloading http://dayzcommander.blob.core.windows.net/releases/Dotjosh.DayZCommander.Installer.msi. I reviewed the Event Viewer and found an event do with Malwarebytes' Anti-Malware Chameleon (see screenshots). Quite a few people seem to be having the same issue despite, like me, not actually using active protection like me. I uninstalled Malwarebytes' Anti-Malware 2.0.4.1028, downloaded the MBAM Clean 2.1.1.1001 tool from http://downloads.malwarebytes.org/file/mbam_clean, it locked up again (but for a much shorter period of time), and logged 4 more Malwarebytes' Anti-Malware Chameleon events (see screenshots). I've run the MBAM Clean tool and we'll see how that goes...

Issue presenting when downloading a large .MSI file from the Internet 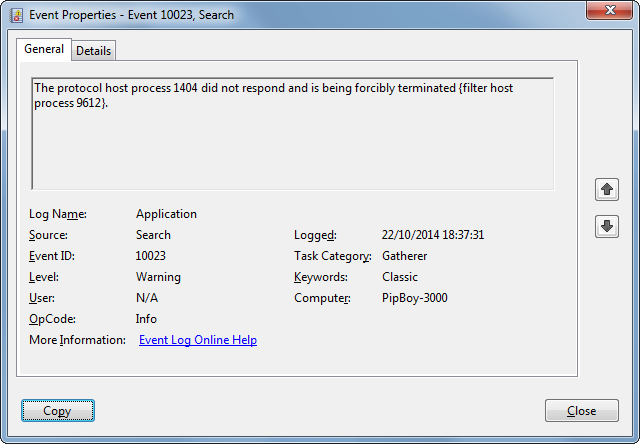 Event ID 10023, Source Search. The protocol host process 1404 did not respond and is being forcibly terminated {filter host process 9612}. 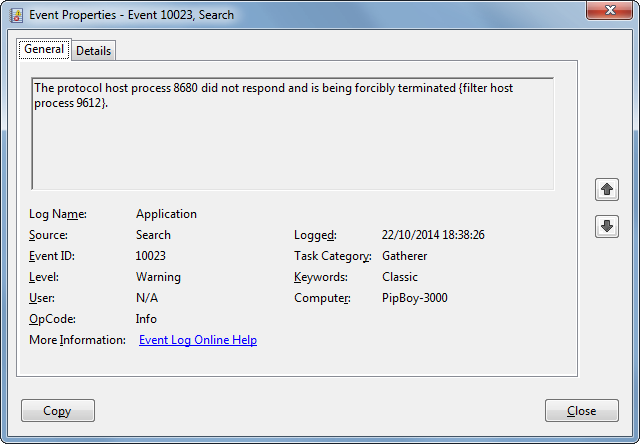 Event ID 10023, Source Search. The protocol host process 8680 did not respond and is being forcibly terminated {filter host process 9612}. 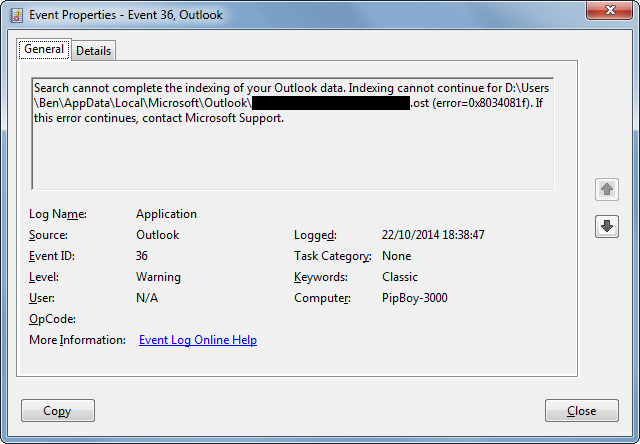 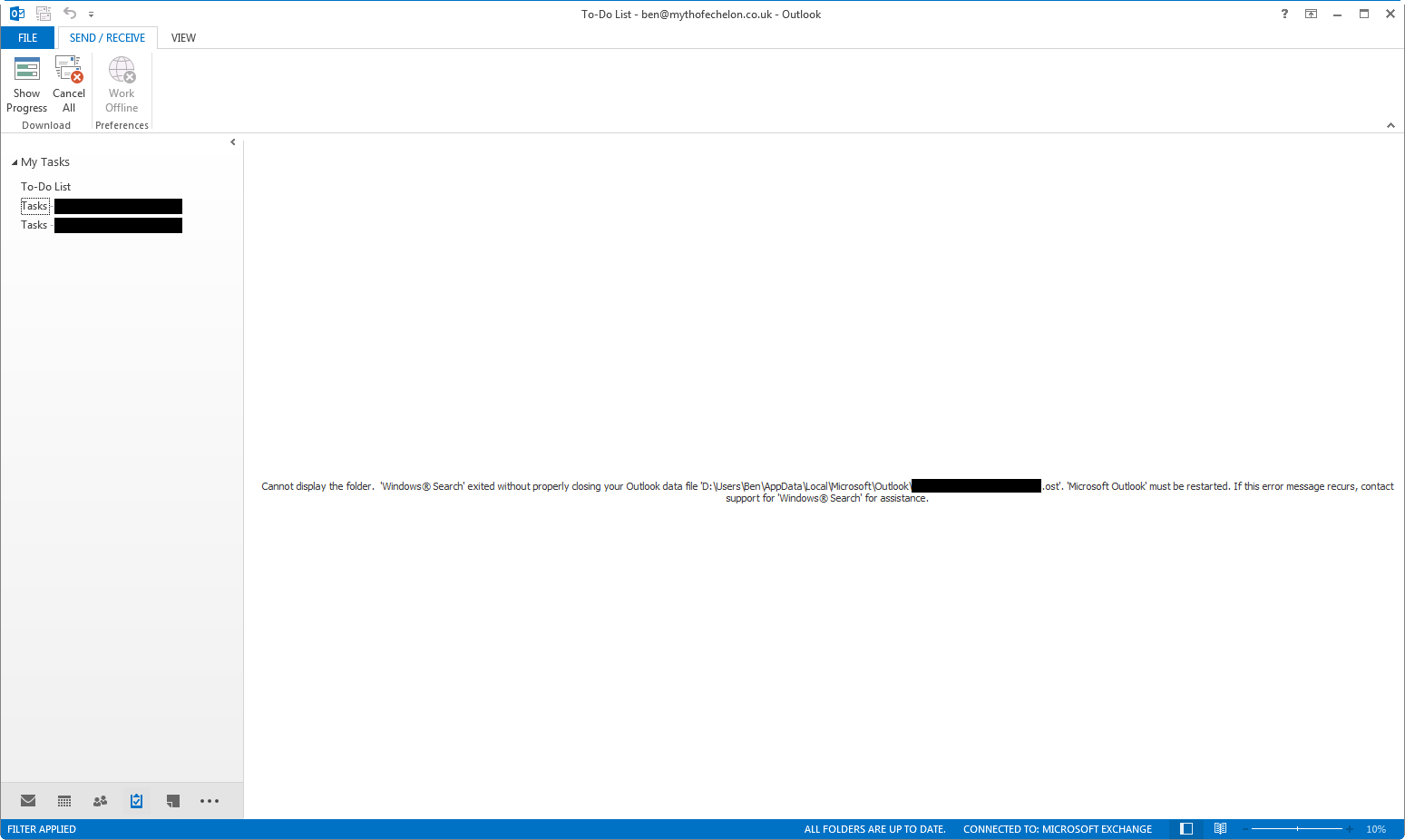 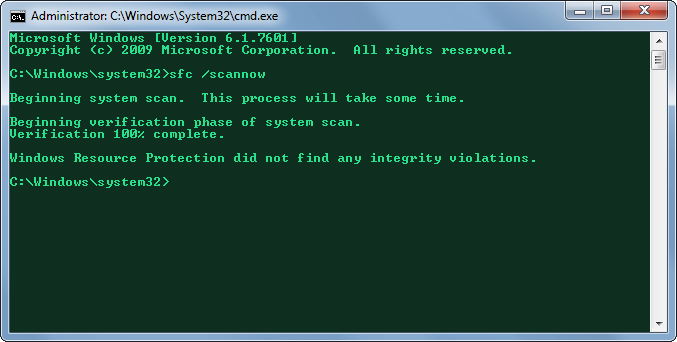 Beginning system scan. This process will take some time.

Windows Resource Protection did not find any integrity violations. 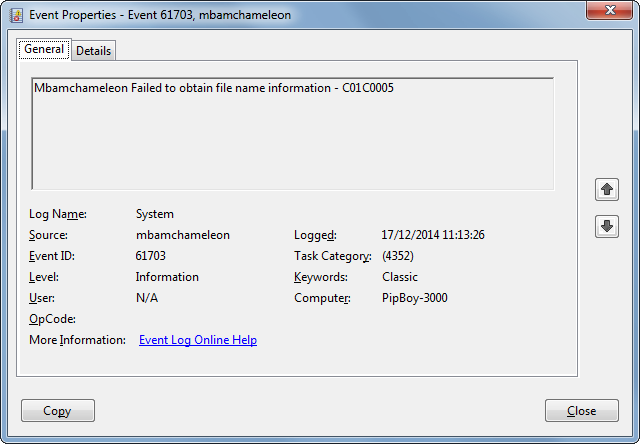 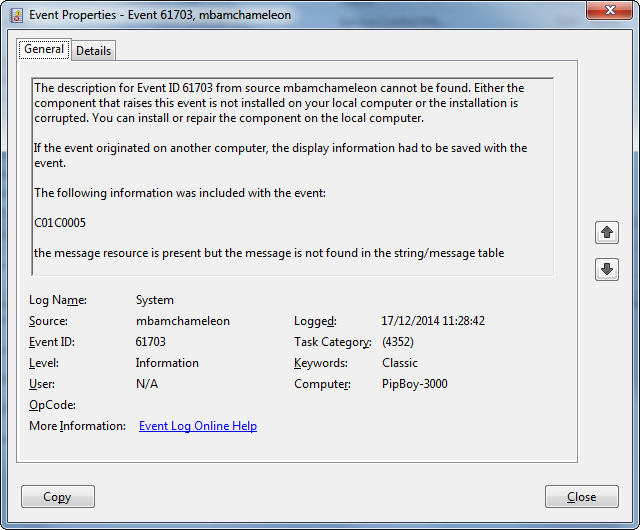 If the event originated on another computer, the display information had to be saved with the event.

The following information was included with the event:

There are several ways Antivirus software may be scanning the file.

Turn off various scanning features, download the EICAR.COM test file from someplace to confirm then see if the hangs go away on larger files.

FWIW I get the same problem randomly. I see the 99.9999% green progress circle just sitting there. It could be a tiny file and it will just sit there freeze my entire OS until the green circle completes. Sometimes up to 5 minutes or more.

I don't know if it's AV related although I suspect it might be. I use F-Prot and MSE here. Maybe it's the combo?

You mention switching anti-viruses, but nothing about disabling them. Granted, switching that many times would probably rule out AV but I'd simply disable whatever you have running. That or uninstall something like Dropbox, just to rule it out. Also, AFAIK Malwarebytes isn't a full blown AV software. It shouldn't be run on its own. Even today, I've had issues with Malwarebytes Anti-Exploit preventing IE, Word, Excel, and Powerpoint 2010 from starting.

I'd also check Task Scheduler and MSCONFIG for any startup entries, as well as Services(.msc). Look for anything that isn't critical and disable it. Restart and see if you can work normally.

Since it affects so many different areas, I'd think it's a virus or hardware that is failing. I'd run Memtest and manufacturer diagnostics on the drives. After that, I'd do an offline virus scan (Kaspersky has always done well for me).

If nothing else, reinstall Windows. Perhaps a slightly better method would be to dual boot and see if a fresh copy of Windows functions normally, so that in the event it doesn't you can switch back to your old copy. If a clean install didn't work, I'd say hardware failure or a bad copy of Windows. If you're using a pirated/illegal copy of Windows, you should absolutely expect problems.

Not the answer you're looking for? Browse other questions tagged windows-7 google-chrome download freeze or ask your own question.