How to add a line to .bash_profile

I just installed Homebrew on bash on my Mac and now I need to do this:

Once you’ve installed Homebrew, insert the Homebrew directory at the top of your PATH environment variable. You can do this by adding the following line at the bottom of your ~/.bashrc file.

"ls -a" shows .bash_profile and .bashrc.save.

Do I add this line to .bash_profile? How?

Sorry. I'm new to everything.

You can run this command in Terminal, which will append the line to your .bash_profile:

.bash_profile is a script that is executed each time you start a new shell. On Linux, it's called under different circumstances than .bashrc, but on OS X, they work exactly the same way. Any command you add to the file will be run whenever you open a new terminal window (thus starting a new interactive shell).

$PATH is a variable that tells the shell where to look for executable files - so when you type a command, the system will search each directory specified in that variable until it finds an executable program with that command's name.

The command export PATH=/usr/local/bin:$PATH prepends the directory /usr/local/bin to the current PATH, so it becomes the first directory searched by the shell.

.bash_profile just a normal plain text file - you can edit it with any text editor, including vi or nano, or even a graphical editor like TextEdit. It's up to you - just remember to save it as a plain-text file.

for example you can use 'vi'

in vi, type i to be able to type

How to add a line to .bash_profile?

Open the TextEdit app. Its like Notepad on Windows.

Navigate to File → Open.... In the center drop down, be sure to select Home. Or, select the Home directory in the left pane. Then, use COMMAND+SHIFT+. to show hidden files: 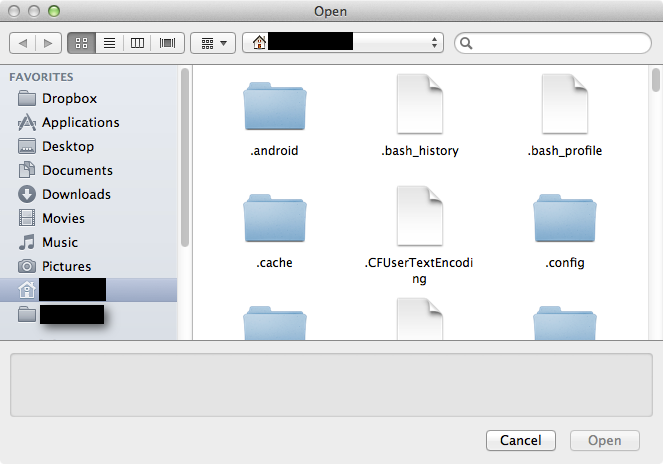 Select .bash_profile and edit away...

Not the answer you're looking for? Browse other questions tagged bash osx-lion path or ask your own question.

1
strange character in my $PATH var
1
bash-completion only after sourcing .bash_profile
4
Installing Ruby with Homebrew
45
Environment variables in bash_profile or bashrc?
1
To set PATH on OS X when export PATH= don't work
3
How to delete old $PATH echo in Mac
2
-bash: export: ''not a valid identifier when logging into terminal