I have a system dual booting Windows 7 and Windows 8. Windows 7 is on the primary partition (E in this screenshot): 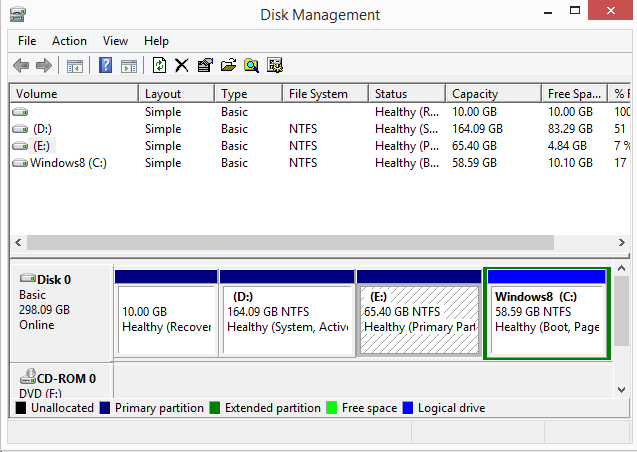 I do not know how to turn a logical partition into a primary partition in Windows. Google is replete with instructions to do the reverse, i.e., primary into logical, but I ignore any instance of the reverse.

If you are willing to embrace Linux for about an hour, there is an instrument to do so in Linux, called fixparts. Its manpage states, among other things:

DESCRIPTION FixParts (aka fixparts) is a text-mode menu-driven program for repairing certain types of problems with Master Boot Record (MBR) partition tables. The program has three design goals, although a few additional features are sup‐ ported, as well:

.....
* You can change primary partitions into logical partitions or vice-versa, within constraints imposed by the MBR data structures.

The last sentence (within constraints imposed by the MBR data structures) means that, if you already have three primary partitions you cannot do it, because all disks with an MS-DOS-type partition table can only host 3 primary and one extended partitions (the latter to be sliced into logical partitions).

You can thus proceed as follows:

For any doubt, Linux has manpages for these programs accessible with the simple commands

For converting a logical partition to a primary one, you don't actually need any Linux disk (though I'm a fan of Linux). You can easily do it with the EaseUS Partition Master: just select the partition > right click > convert to primary.

And you can use the same app for merging your partitions as well (after converting the logical partition to primary), again: right click on the partition > merge partitions.

The latest version of the app at the moment is 9.5.

Not the answer you're looking for? Browse other questions tagged windows-8 partitioning or ask your own question.