I have a laptop running Windows 8. Although it originally ran well, it started having very bad performance issues. I decided to perform some research into the topic. Opening up Task Manager, I discovered a process called TiWorker.exe (I think this handles update checking) takes up ~50% of my CPU for the first hour my computer is on, then shuts down.

This causes my computer to have horrible load times an very bad performance. My CPU usage hovers between 90-100%, which is unacceptable. To put this into perspective, my CPU hovers between 0-20% and Linux, and the startup is quick. I understand that Linux has much better performance than Windows anyway, but this is excessive.

Is there any way I can cause TiWorker to take up less CPU? I really need my computer to be fast (at least, more so than a snail). Thanks for any help. I really appreciate it.

So it seems, that Microsoft published an update in 2013, introducing some new features into the Windows Update engine, including compression of old files. The TIWorker.exe will start to compress files, but the SFC (System File Checker) detects the modified files and restores them back to how they were, causing the TIWorker.exe to crash (you'll see the Windows Error Reporting in the task manager eating all you resources).

It seems, that running the following command on an elevated command prompt fixes the issue:

I can't test it on my machine as I installed my machine from scratch when I encountered that issue, but the approach looks really promising.

The original source mentioning this solution can be found here.

I am currently experiencing the same feeling. Since we share a common goal (be able to work), I suggest you do the same as I did:

2 - Right click under TiWorker.exe and set its priority to Background or, temporarily, suspend it (this will release your system immediately). 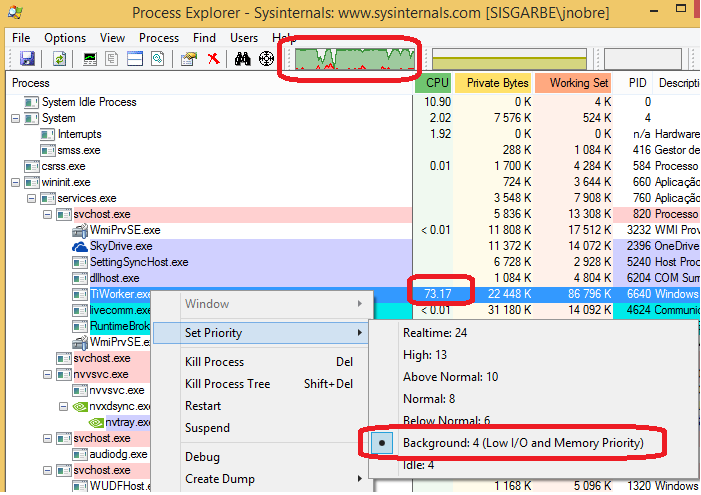 Your best bet is to see what TiWorker.exe is and what may be causing it to use CPU. Sometimes, high CPU usage might be caused by another problem, like high disk usage. (Perhaps that leads to high disk cache usage which the CPU is involved with; I dunno. But I've definitely seen that cause and effect.) Or high memory usage, which causes disk thrashing. Anyway, your best bet is to look at TiWorker.exe specifically. You may find that instead of trying to control the problem (by limiting its impact), there may be a way to just eliminate the problem (making things work more right).

However, there are some other approaches that may work with this and other executable files in a rather consistent way. I'll share with you multiple approaches.

Otherwise, you may want to adjust priority, which can be done in task manager or Process Hacker or Process Explorer (as shown by Julio Nobre's answer) or WMIC.

Another option, if you have multiple CPU cores, is to adjust CPU affinity. In Windows 7 (but not XP, if I recall correctly), Task Manager has this capability, so I presume that it is available in Windows 8 as well. That approach saved me at work once; I limited a task to a single CPU core and then it maxed out at 50% instead of 95%+, which made the whole system feel responsive instead of being so unresponsive that it set off alerts for failing to communicate within expected time frames.

Another option may be to use a (downloaded) CPU limiting program, such as Process Tamer or Battle Encoder Shirase.

Finally, another option you can try to tinker with is "Thread I/O Priority", available via Process Hacker or Process Explorer.

To fix the TiWorker.exe issue

The steps will differ from BIOS to BIOS, apologies for that. Anyway:

the fastest way I've found is to

For me the fix was:

PS. The solution is taken from my blog post here, check out for more details and the explanation

Have you tried the following fix from Microsoft?

I had the same issue which i just resolved, the file you are having problems with is windows automatic update service. Go to control panel, search update, click turn windows updates on or off, then set it to never check for windows updates. If you would like to check for updates in the future just change the setting get the updates and change it back to NEVER.

This worked for me (all or one of this steps):

Now the "worker has stopped working!" (for me).

Not the answer you're looking for? Browse other questions tagged windows-8 performance cpu windows-update or ask your own question.