Is the same port acting as both client and server?

i find something strange in this netstat output. the output is taken using netstat -a -n -o -p TCP command on win 7.

Please note these two lines. both local and foreign address is localhost. but how come the ports are paired? out of two ports 55486 and 55487 which one is the server port and which one is the client port?

I dont understand how is this possible with TCP? 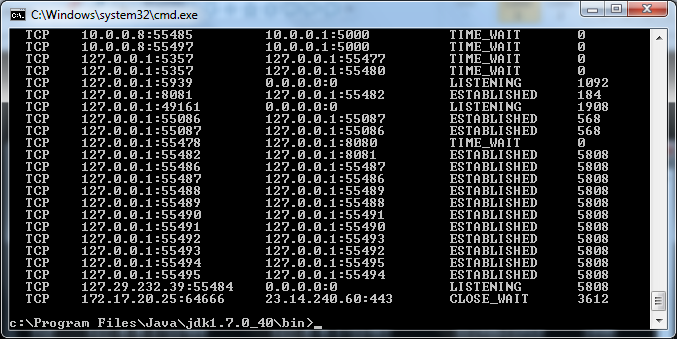 Is stating the client is connecting to the port on 55487 for the server while the client uses port 55486.

TCP requires the "3-way handshake" to set up the connection between a client and server.

TL;DR - Client generally uses random port to connect to a server with a specific port. The server responds back to that machine using the random port. The client and server are NOT on the same port.

I can’t quite tell how much of this you understand now, so allow me to be a little bit pedantic.

Your situation is just a little bit more confusing.  Your jetty server (process 5808) is, of course, creating sockets and accepting connections on them -- that’s what servers do.  But it is creating many sockets at once.  (By necessity, they are on different port numbers; the OS won’t allow multiple sockets with the same protocol and port number to co-exist.)  And it seems to be using random (OS-assigned) port numbers.  For example, as you pointed out, it is listening on port 55484.  I’m not familiar with jetty, so I don’t know whether that is normal.

The part that I find really weird is that process 5808 has connected to itself on several of these sockets.  So you have several TCP connections where both sockets are held, not just on the same host, but in the same process.  I don’t think we can tell for sure which end is the client and which is the server.  I would actually guess that the lower port number is more likely to be the server, but that is just a guess.

It is not unusual situation. 127.0.0.1 is valid IP address which your program listens to. Program can listen on this address. Program can connect to this address as well. This complies to Client-server architecture. You have client and you have server. They can be on different computers but in same time they both can be on one computer.

You can have your own Web server running on your computer and listening on interface 127.0.0.1. Open your browser and type 127.0.0.1 - as result you will see web page from your Web server. In this situation netstat will show same thing.

To answer your question:

From this output it seems that the same port is behaving as both client and server.

No. One port is client, another is server. Notice - it does not say

Which does make sense.

Not the answer you're looking for? Browse other questions tagged networking port tcp netstat or ask your own question.

1
What exactly does this netstat output mean?

1
what is ip 10.1.1.130 to which seems monitored by NT Kernel & System process on Windows 7?
4
The meaning of port 0 in netstat output
0
TCP number of connections differ from client to server
0
Opening a port on CentOS server not working externally?
2
TCP Client and Server Port forwarding
0
Port forwarding and C++ Winsock Client-Server applications
23
Do 0.0.0.0:0 and *:* represent the same thing?
0
Using lsof and fuser I can't find the process listening on a strange port
0
how to read the output of netstat -ano?