How to persist `gnu screen` layout after restart

I am using the screen split in 3 with vim on the left, and two other screens split horizontally on the right. I know that when detaching from a screen, I can save the layout with :layout save my_layout_name.

I already have layout autosave on in my .screenrc file, but that doesn't help with my issue.

How can I persist a screen's layout between different terminal sessions, and after pc restart? Or maybe as a workaround, is there a way to run screen (parameters) which split it, set up the bash on every window and save the layout?

Manage your regions, then execute code inside screen:

Ctrl-a then : then layout save default Provided screen is newer version (with layout feature) Good luck.

UPDATE: Here is the .screenrc file that will make the change permanent, along with adding other nice features.

"layout autosave on" works only for explicitly named layouts in .screenrc.

Namely, if you specified some layout as ABC, switched to it within Screen session and detached, this last layout will be restored after the session is resumed.

If you did not specify any layout in the configuration file, you have to run internal command "layout save your_layout_name" before detaching.

This is a .screenrc with predefined layouts to choose from: 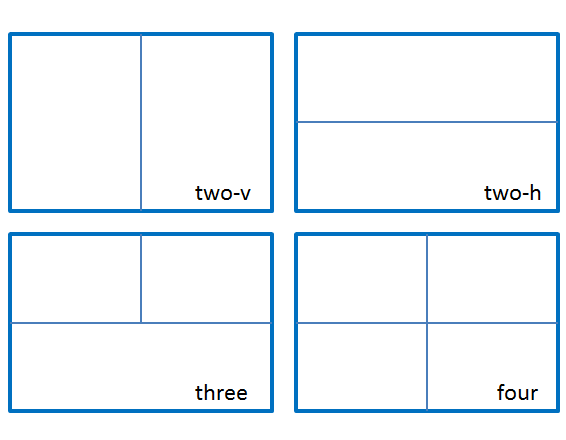 Once selected from within the Screen these layouts are preserved upon detachment until the next resuming of the session (due to "layout autosave on" command).

If you've built your own layout it must be saved with "layout dump filename" command. Then you can use a code from "filename" file to add your layout in #layouts section of this .screenrc to select from.

By default "two-v" layout is loaded with the only window with bash.

According to this source it is not possible due to the way screen works. There is a hack provided there, however. It basically boils down to nesting screen inside of another screen, which might not be very convenient. (Answer found here)

If you use screen for terminal splitting on your local machine (which I infer from the pc restart mentioned), you might want to check out the terminal emulator called terminator. It supports horizontal and vertical terminal splits (nested as well) and you can save your favourite layout for further use. Then you simply run terminator with an appropriate option: terminator -l <name of saved layout>.

9
GNU/Linux: Dual screen and separate workspaces
2
How do I get the F1-F12 keys to switch screens in gnu screen in cygwin when connecting via SSH?
13
Enable audible bell in gnu screen current window
14
How to disable alternate buffer in GNU screen itself but not for vim, less inside it?
7
How can I cause vim to copy text to GNU screen's clipboard buffer?
30
How can I ring the audio bell within a bash script running under gnu screen?
1
Play GNU screen terminal sessions and slow them down
1
GNU Screen hangs in ConEmu
2
Why is GNU screen interfering with Vim's Ctrl-Pageup to switch tabs?