How to correct the unrecognizable code in my debian? 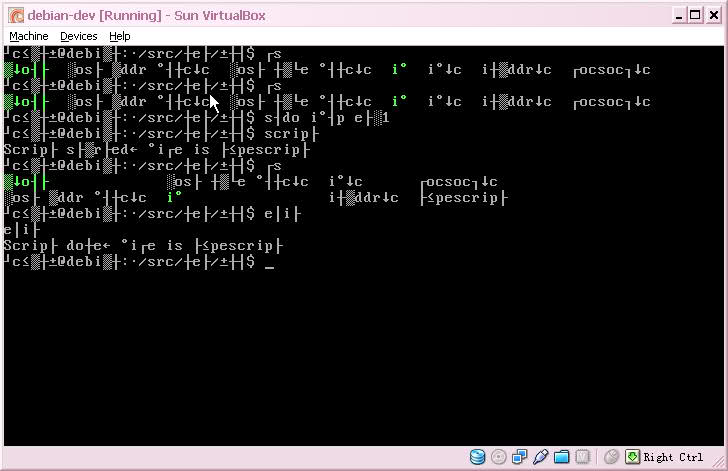 How can I correct this?

The garbled characters are likely due to the terminal getting a SI character (Shift In; ASCII 14; Control-N). SI is a VT100 control character that can cause the terminal to switch to an alternate character set. Many real terminals (e.g. an actual hardware device, or just the text-only console of an OS) and terminal programs honor this escape code.

The direct way to switch back to the normal character set is to send a SO character (Shift Out; ASCII 15; Control-O) to the terminal.

Because the character set is switched, you may have to type the recovery commands “blind” (without relying on seeing what you have typed).

If you can assume a reasonable shell with a printf builtin (or no shell builtin and a reasonable external printf command), you can use printf '\017' to send a Control-O to the terminal.

Did you try the unix reset command?

This is usually the result of dumping a binary file (a program, or a data file) to the terminal (cat some.mp3 or similar). Usually typing reset will get your terminal back in order. If that doesn't work, the next thing to try is a reset function on your terminal application -- look for it in the application's menus. (PuTTY, for example, has a Reset Terminal in its system menu.)

Rarely, neither of these work, and you'll just have to shut down that terminal or shell and start another one.

Not the answer you're looking for? Browse other questions tagged shell or ask your own question.

2
How to redraw Linux console
16
Reset garbled Terminal window on OS X
11
Display messd up with weird characters in Gentoo after `cat` a binary file
2
What escape code do I need in PS* to make sure terminal is back in normal settings on shell prompt?
0
Tmux visual artifacts, strange character map

4
How to find out the amount of lines of documents in a folder using shell scripts?
1
Capturing the console output
0
Error while executing bash command stored in string
0
bash: Running a program from the console without holding it up or line noise
1
Switch back to VIM before shell command finishes
0
How to save the stdout and stderr to a file while still seeing the output?
0
Shell script force stop without waiting for the exit code
1
how to “trace” a program such as shell?
4
Is it meaningful to have an EFI/UEFI boot disk?
1
How to setup integrated terminal of vs code with Cmder and bash as default