External Hard Disk is not accessible. “The disk structure is corrupted and unreadable”

I have a 1 TB AgentGoFlex Seagate external HDD.

Lately it was causing some issues like a few folders which had data were not showing any files.  A few folders were not opening, etc.

While in Win8 when I try to access the disk from command prompt it says "The disk structure is corrupted and unreadable".

Even chkdsk is failing now with the error: "The file system is NTFS. Unable to determine volume version and state. chkdsk aborted."

When trying to run the "check utility" from F: → right click → Properties → Tools → Check, it gives the below error. 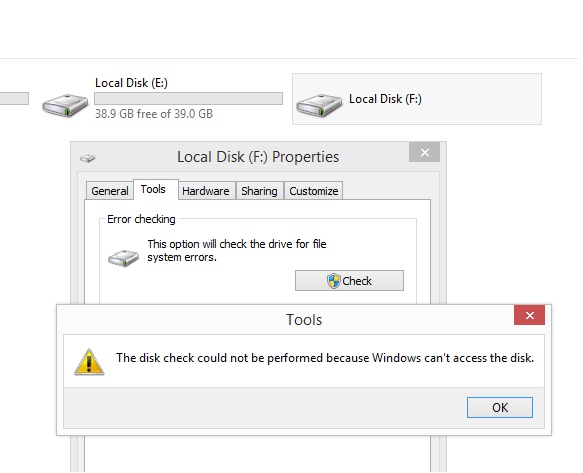 Formatting the disk is not an option as I have very important data on it.

Please suggest what can be done to enable the access to hard disk.

First of all, do not do anything more on the disk (at least never write to it). The disk not being recognized (as opposed to "being recognized and found empty or with unreadable data") seems to indicate either a completely blasted disk, which chkdsk isn't wont to do, or something wrong with the partition table or geometry of the disk, or the way the USB enclosure handles it. A hardware failure is also possible.

This can and will happen when USB enclosures try to negotiate between the disk and the computer they're connected to. So the first thing to do would be to take an image of the disk on a (obviously larger) disk at the closest-to-physical level possible, using dd under Linux. Then you can fiddle with an image copy to your heart's content, without risk of further damage to the real disk.

We have no fewer than three entities in our "external disk". The USB enclosure hardware, exposing as a block device. The physical disk inside the enclosure. The physical device, i.e., the sequence of LBA sectors from first to last. And finally zero or more data partitions, hosting the file systems. To be "recognized" and displayed in a desktop, all links of the chains need to be working. But to take an image of the physical device you need only the first two. If you plug in the device and run the command-line dmesg (as root), you ought to see something like this:

...which is the enclosure getting recognized, and then identifying itself and its contents:

Next you'll see the driver informing of its geometry, nature, and implicitly its device node, here sdd (for SCSI Disk Four, since sda, sdb and sdc were already taken):

Then the kernel recognizes that there is a partition (if you don't see this, the partition is not there or is invalid):

Now Linux has everything it needs and reports successful attachment:

And so the search for data partition begins, i.e., OK, we have sdd1, but what is on there?, and the answer is:

This above was a "good" mount. But just knowing that the device is sdd, or sdc or sdb, allows me to make a binary copy (assuming I have enough free space on /mnt/backupdisk): input file /dev/sdd, output file DiskImage.raw, block size 1 MB:

Note that the input file is /dev/sdd and not /dev/sdd1 (or any other number).  Now if I wanted to, I could find out the offset of the data partition within DiskImage.raw, and mount it with the help of a loop device. Here you'll find the dirty details.

The second thing to do would be to put the physical disk into another enclosure, thereby ensuring the enclosure is good, and getting a chance of the new enclosure correctly interpreting the disk. If the disk reappears, it might have been the previous enclosure that's broken. Just in case, backup all of the newfound drive contents, verify the backup, zero the disk with a disk-overwrite utility so that it goes completely dumb (you can't have two devices with different opinions in a device chain), reformat it natively from Windows and restore the data. It's a lucky shot, but I saw it happen; and the attempt isn't too expensive, good enclosures going for about US$ 19,99 new.

Professional recovery services, those you can find with Google. A not too honest way of going about it would be to send over the physical disk, and – in case you got a "Yes, there is no hardware damage and we can recover all of your data for just US$ $$$,$$$!" answer – well you'd then know that the data was still salvageable. So you could attempt doing it yourself for free on the image backup you took, and only pay for the diagnosis and disk S&H. If you failed, the option of coughing up the requested dough would still be there. If there is hardware damage, the professional service is basically your only option. There are several voodoo tricks that will (temporarily) revive a "dead" disk, often long enough to recover the most important data at least, but none that is guaranteed to work each time (heating the disk, cooling it, "twirling" it – I even saw suggested to smartly rap it against a hard surface). All of them will do more damage, i.e., you have to be sure to use the one trick that will work the first time, or you'll have killed the disk forever. I just added this to explain why you'll see success stories about revived disks: there are such stories. But if you want to be (mostly) sure it will happen to you, well – hire a professional.

If you're sure the hardware is OK – disk spins, no rattles, no strange sounds or buzzes, no clickety-clackety recalibrations – then "all" that happened is that chkdsk messed up some data.

"Home" recovery usually would go like this (basically the same thing the pro guys would do once hardware damage had been discounted), working on the disk image copy:

OK, so you try to mount the partition in Linux and get errors (notice that /dev/sdc and /dev/sdcN are different things – the image refers to /dev/sdc).

...this seems to indicate that the partition, as the system believes it to be, is wrong or badly damaged. Let's check out the first option first:

Next step will be to check the actual partition start. By seeking into the image file (or /dev/sdc) we will search for the NTFS signature:

...with the data above we expect NTFS boot to be at sector 63, that's why we set skip. Also, we'll try with every sector in the first (say) megabyte...

...just to be sure there is only one boot sector (I had this happen to me. On a FAT32 disk, but still) and that there are no read errors anywhere.

So we can now copy a large chunk of /dev/sdc1 onto, say, /tmp/mydisk.img and attempt to fix it from Linux. This won't damage the physical disk, which will still be available unchanged for other attempts. And since now we know the PT to be correct, we can use /dev/sdc1 for the copy and entertain hopes that we couldn't before:

If NTFSfix does not work, well, we're in trouble. There are more accurate utilities that can be tried, though. And if you need to recover JPEG picture files and the file system wasn't fragmented, this can be done automatically by seeking the JPEG headers. Same, almost, goes for PDF, TIFF and Office documents, except that I don't know how to recognize them (for JPEGs, I would :-) ). As a final option I've found these guys – I don't know them, am not related to them and won't accept any blame. However, as these things go, the price is very reasonable.

A simplir solution that for me and for my colleagues was to mount the disk and use chkdsk on Windows 7.

Not the answer you're looking for? Browse other questions tagged hard-drive external-hard-drive data-recovery chkdsk bad-sectors or ask your own question.