My computer's time keeps getting set incorrectly. My time zone is set correctly, and if I "Update now" to synchronize with an internet time server (time-a.nist.gov), the time gets set correctly. It seems that some other program runs that sets the time incorrectly.

The changes don't always follow the same pattern, but the when the time is set incorrectly, it is always one hour earlier than the correct time:

I dual boot Linux, but I haven't run Linux in weeks. Also, my time zone is UTC-8; if this were the dual-boot problem, I would expect the incorrect time to be wrong by eight hours, not by one hour.

Any ideas? Is there a way to detect when a system call changes the clock? Once the one-hour pattern starts, it is predictable when the next change will happen, so I could monitor at that time, if I knew what to monitor.

To clarify: while Windows is running, the system time gets changed to the wrong time. It has nothing to do with Linux, BIOS, or CMOS.

Check weather your CMOS battery is working or not.If it has expired, then the computer won't be able to keep correct time after reboot/shutdown.

And you are setting them in here? 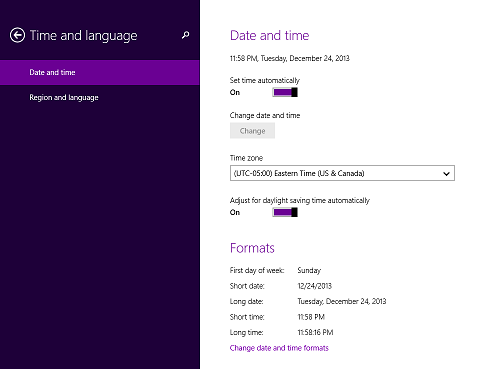 Also..do you know if this only started happening when you had Linux installed for dual booting? ...or always a problem even when it was only Windows installed?

I finally figured out, more or less, what was happening, but I'm confused about why. Windows would, from time to time, set the time based on the hardware clock. That makes no sense to me -- the clock was getting set from a time server out on the internet; I don't understand why Windows would also to another source as well. The issue was further confused by daylight savings time -- the hardware clock doesn't adjust for that.

If this explanation doesn't quite make sense, I won't be surprised. In any case, the problem hasn't happened since I set the clock from the UEFI startup program. I'll see what happens when the clock switches back to standard time.

Not the answer you're looking for? Browse other questions tagged windows-8 time-zone or ask your own question.