But in process of compressing, file get insanely fragmented, usually above 100'000 fragments for system disk image.

With such fragmentation, defragmenting takes very long (multiple hours per image). Some defragmenters even can't handle it, they just skip the file or crash.

The source of the problem is, I think, that file is compressed by chunks which get saved separately.

Is there good (fast) way to get image file defragmented yet keep it compressed (or compress it without causing extreme fragmentation)? May it be some utility to quickly defragment file to continous free space, or some utility (or method) to create non-fragmented compressed file from existing non-compressed? 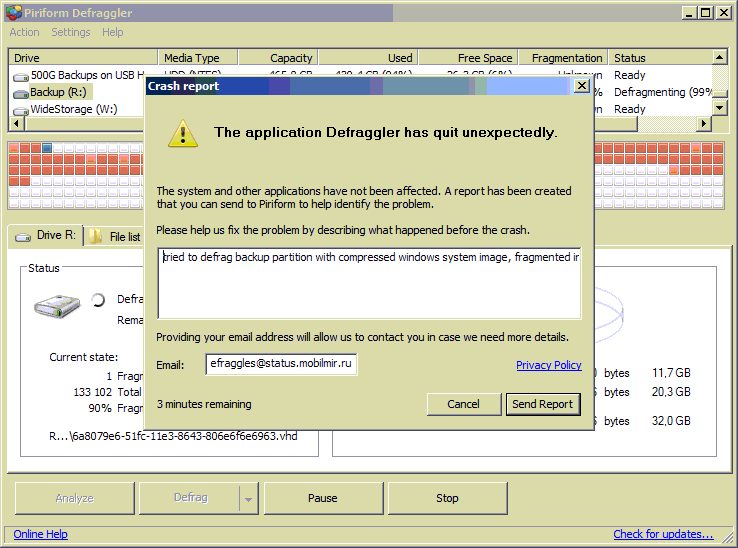 Remarks based on comments/answers:

an working method or an program for Windows to either:

The secret is to not write uncompressed files on the disk to begin with.

Indeed, after you compress an already existing large file it will become horrendously fragmented due to the nature of the NTFS in-place compression algorithm.

Instead, you can avoid this drawback altogether by making OS compress a file's content on-the-fly, before writing it to the disk. This way compressed files will be written to the disk as any normal files - without unintentional gaps. For this purpose you need to create a compressed folder. (The same way you mark files to be compressed, you can mark folders to be compressed.) Afterwards, all files written to that folder will be compressed on the fly (i.e. written as streams of compressed blocks). Files compressed this way can still end up being somewhat fragmented, but it will be a far cry from the mess that in-place NTFS compression creates.

Reading the article on Wikipedia about NTFS compression:

This allows for reasonable random-access times - the OS just has to follow the chain of fragments.

First things first. WBAdmin is in essence a backup utility that cam restore a full system. So, it's expected that it's output file is large (> 4 Gb). As shown by the quote, large files become rapidly fragmented. This is due to the way NTFS compresses: not by files, but by sectors.

A good analogy is of a cake being split into several boxes, some of which aren't empty. This is the initial file. The compression part squeezes the pieces of cake, leaving a space in the boxes. As the pieces of cake aren't together, because of the created space, the pieces that make up the cake become fragmented.

I am still skeptical about NTFS giving out that kind of compression ratio. According to a test made by MaximumCompression on multiple files, NTFS gets the lowest score in compression ratio, a measly 40%. From personal experience I can tell you it's much lower than that, in fact so low that I never bothered to used it nor have I seen it's effects.

The best way to avoid fragmentation is to stop relying on NTFS. Most defraggers will fail to expand or move the compressed files. If somehow they did, NTFS could not be able to expand the files, or if he could, as the defragmentation process would fill the leftover space from the compression (the 4kB), the expansion would fragment the files, as the file wouldn't be written in the before-contiguous clusters.

This being said, and if you don't need to read the file constantly, use some of the formats recommended in the above link. 7z and rar are quite efficient (i.e. they compress with high ratios at a decent time). If you care about space and not about time, then choose a PAQ-type algorithm (although you will spend a very long time compressing and decompressing the files). There are also speedy algorithms available.

If you do need to read the file constantly, don't compress it at all. NTFS is just too damn messy.

While not exactly what OP asked, I have had good experience with a 3rd party software named Paragon. NTFS by definition trashes your filesystem something horribly when you compress (or sometimes even write) files. This extends to consuming multiple MFT entries, and... It's bad. Microsoft's NTFS driver doesn't even clean this up when a file gets defragmented. Hence, 3rd party tools are required. Paragon allows you to either boot it as an OS in itself (ISO image), or install into another Windows OS with access to the target filesystem. Then you can defragment both the MFT and the files. This is to my knowledge the only way to fix this deficiency in NTFS, short of reformatting the volume.

Today, 2 years after the question was seemingly asked, I'd rather recommend deduplication - this can give you upwards of 90% disk savings if the images are just "a little" different. A W2016 Nano Server inside a VM works really well, but I suspect even FreeNAS or anything else using ZFS could handle it.

Windows has lately been treating ZIP files like folders. ZIP files can be more compressed than NTFS-compressed files and are not inherently fragmented, unlike NTFS.

Why not test one of your disk images by compressing with 7-zip in ZIP format & see if it is directly usable for restoring?

If not, play with the 7-zip compression parameters to maximise compression using whatever format is best, eg, 7z. You can increase the compression far beyond NTFS and therefore make much more space available on your disk - though it would be fastest to decompress to a 2nd physical disk or RAM, preferably on a different controller & I-O cable.

Video, graphics, and other compressed data files (like .XLSX) are already very compressed, so no benefit to NTFS compression there. Nor for databases or Outlook mail with random updates. But executables, txt, html, etc., files benefit greatly.

Compression also is an always-win for small files, eg, if <64K compressed, only one fragment. Only hassle would be recovery if there are disk problems.

Not the answer you're looking for? Browse other questions tagged windows images ntfs compression defragment or ask your own question.

19
NTFS compressed folders: is it possible to tweak compression ratio?

8
Why does Windows Defragmenter do nearly nothing on a disk with 23% empty space?
2
Windows 7 inbuilt and 3rd party (de)fragmentation related queries
5
Force all files in a NTFS compressed folder to automatically compress [Windows]
5
Do more compressed PNG images take longer to load?
2
Which files and folders are compressed when using compact.exe /CompactOS
1
Copy files to custom sectors on HDD
2
Is an NTFS compressed drive really written compressed under Ubuntu?
0
Is there a way to compress exe files?