How do I change the wallpaper of Windows 7 Starter Edition?

Is there a way to change the desktop wallpaper in Windows 7 Starter Edition? I wanted to do that on my new netbook, just to find out that there is no "Customize" option in the control panel. Microsoft obviously wants to keep the netbook users rather rigidly from customizing their machines.

It isn't even possible to edit the picture itself in the C:\Windows\Web\Wallpaper\Windows\ directory, due to lack of rights. From what I can tell only the user "Trusted Installer" would have enough rights to do so...

Resetting permissions on the file and overwriting will not work, as shell32.dll has code which compares the image with a SHA-256 hash. The only option other than tampering with the files yourself in a hex editor is using Stardock MyColors, though you must use an entire theme.

Nope, Windows 7 starter will not let you change the background. You'll need to upgrade to Home Premium or higher

EDIT: I take that back, there is a way to do it, but you'll need to use a third-party tool like Windows Blind in order to do it. I wouldn't recommend it, however, because most netbooks are short on resources already. A third-party theme manager would just take up more of those resources

the simplest answer, without adding more downloaded-app cruft, without sending more money to Redmond, is

As far as I know, there's no hash key comparison happening, although you need to set the registry key permissions right to make it work

you may need to change the permissions of C:\Windows\Web\Wallpaper\Windows, I seem to have 'special permissions' as well as read/write permissions, for admin

"You can use Stardock MyColors to change Windows 7 Starter wallpaper. It entirely bypass that restriction."

This site also has some workarounds. Basically, find the file:

and as an Administrator, reset the permissions and overwrite.

Does this program help you change the Wallpaper ?

Microsoft had the great idea to forbid changing the wallpaper in the Starter Edition of Windows 7, so that people would buy more upgrades. But that's really annoying. I mean - you have got a nice netbook with Windows 7 installed, and now you probably want to customize it and add a cool wallpaper! Who wouldn't? But - oh no - there is no way to do that! Crap, isn't it?

I was annoyed too, but I started investigating, thinking and trying, I simply wanted to find a way to change the wallpaper without installing a huge software like Talisman Desktop Pro, which eats up a lot of performance.

And I was successful! I finally figured out a solution and created a little tool which does everything for you, so I can share that solution with everyone suffering from the same problem! I don't want you guys to be as frustrated as I was!

One of the simplest things that you can do would be to just purchase a Windows Anytime Upgrade package from Microsoft. For $79 USD you can take your starter edition and bring it up to Home Premium with out having to do a complete install of anything. You should then have a much nicer experience with Wnidows 7 and not have to muck around in the registry or get frustrated because you can't do something.

Students have an even sweeter deal, they can upgrade to Windows 7 Premium for only $29.99 until January 3rd of '09. Goto the website win741.com and click on buy to see the full details.

Hope this helps you.

Download Oceanis_Change_Background_W7.exe, there is also an explanation on how to use it.

BioniX Background Wallpaper Changer will do this for you (yes, even on Windows 7 Starter). Even more, you can have extra functionality that is not available on Windows Pro such as: 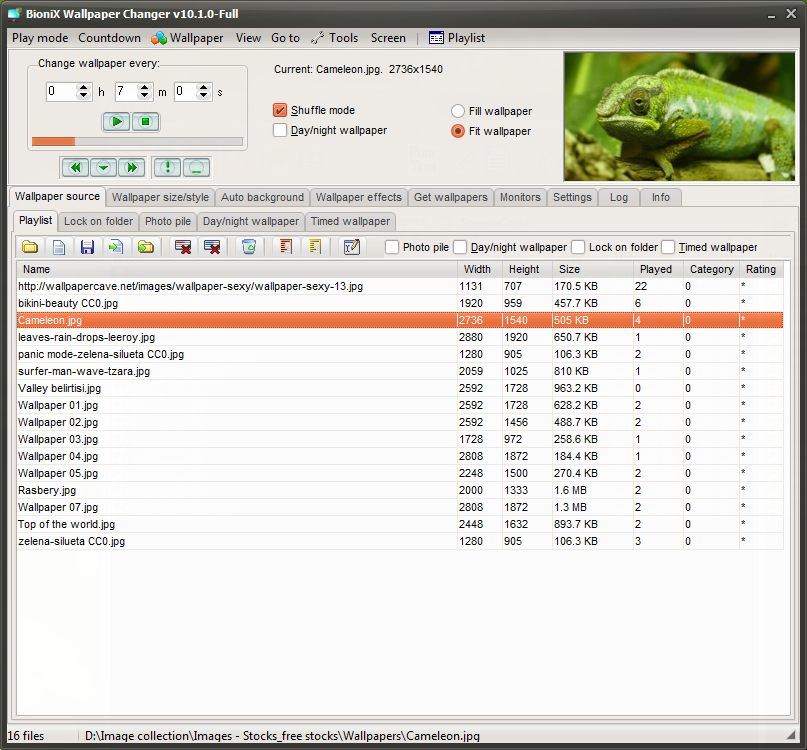 Not the answer you're looking for? Browse other questions tagged windows-7 netbook desktop-customization or ask your own question.