I am writing a macro to convert a Word document to LaTeX.

All goes well, except one thing: The document makes heavy use of style templates, in effect using character styles to achieve a functional markup. For instance, all author names that appear in the text use the character style "Author name". All non-English words or (and this it where it becomes tricky) phrases have the style "Foreign word" applied to them.

Let's consider the example of the "Foreign word" style. In order to convert it to LaTeX, what I need to do is create a search that searches as greedily as possible for all characters that have the style "Foreign word" applied to them, take this string, and wrap it in \emph{\1} (\1 indicating the position of the matching string).

Using Microsoft's very modest explanation of its wildcard syntax, I would expect that a search for the term "*" (sans the quotes) and an applied style of "Foreign word" should do it, but it does not. It is not greedy enough, only finding individual characters. I can make wildcard searches more greedy by including delimiters in the search --- "[ ]*[ ]" does find entire words --- , but that would fail in the current instance, because, for instance, while a term like "ad-hoc" might be preceded and followed by space, the space itself will not have the "Foreign word" style applied to it and thus be excluded from the search (nevermind the fact that there is a plethora of potential string borders: a multi-word foreign phrase might be preceded and followed by either a colon, semicolon, space, one of six potential quotation mark characters, paragraph mark, or...).

So essentially, I am looking for a wildcard search expression for Word that matches the longest uninterrupted string possible that has a certain style applied to it.

Edited by barlop to add the OP's clarification.

`As an example, given this text below, which i've put in quotes.

"Apart from seigneuries, there were also higher noble fiefdoms to be awarded, although nowadays the only remaining title of nobility in Québec that can be traced back to the seigneurial system is the title of ‘Baron de Longueuil’, in the Le Moyne family"

Looking at that text quoted above. All italicised words have the style "Foreign word" applied to them. In the case of "Baron de Longueil", this includes the spaces between "Baron", "de", and "Longueil". I am looking for a search that would catch each of these three italicised terms as one string respectively.

Result should be "Apart from \emph{seigneuries}, there were also higher noble fiefdoms to be awarded, although nowadays the only remaining title of nobility in Québec that can be traced back to the \emph{seigneurial} system is the title of ‘\emph{Baron de Longueuil}’, in the Le Moyne family`

Here is the principle. This replaces any italic text with some mark up around regular text.

Notice the find box is actually blank, but below it it says the formatting/style it's looking for, (italic)

Notice the replace specifies what to replace with, and below, specifies the formatting/style(regular in this case) 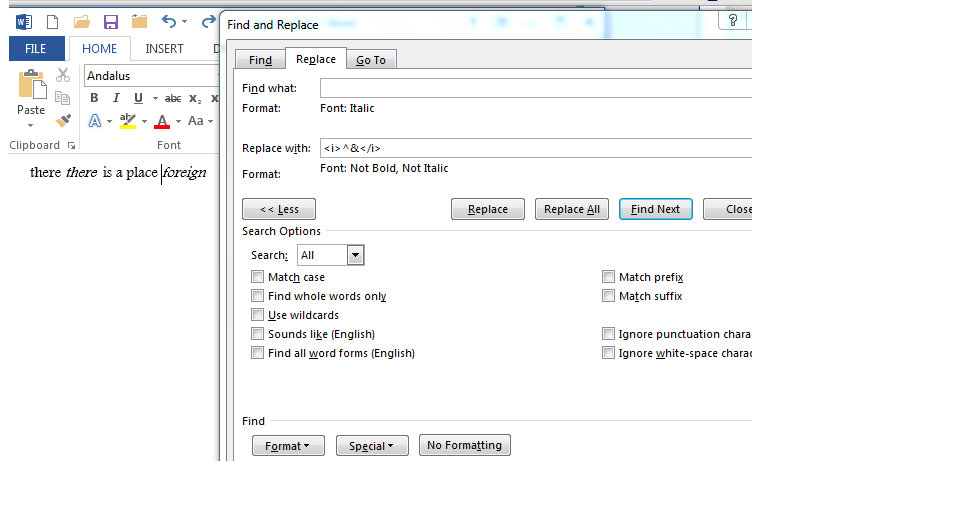 Regarding choosing the font/styles, here is how I did it, with screenshots included.

In the bottom left of the find/replace screen choose format..font 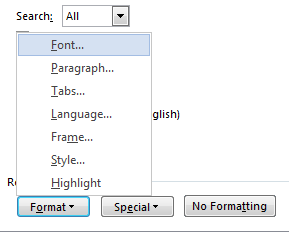 And choose Italic. I ignore all those checkbox like things under 'effects'. It's the selections in that textbox area(italic,regular,..), which i've circled in black that are the ones to use, for selecting regular or italic etc, that worked. 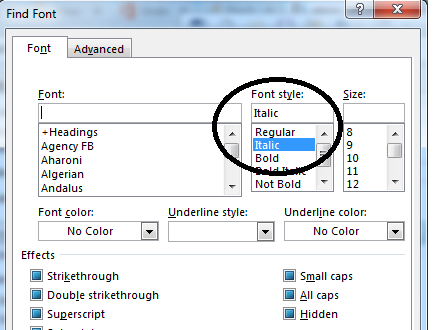