How to create chrome profile desktop shortcut that will not open in new chrome window?

For some work patterns I need to switch between many profiles. The problem is that even when a profile is already in use, a new window appears when I click the shortcut.

Is it possible to somehow modify the shortcut so it won't open a new profile window, but focus the existing window instead if it's already opened?

Such "open new or focus existing" behavior is very common among desktop rograms, but i can't find how to do this trick with Chrome desktop shortcuts. :(

The only way that Chrome will open a tab in an existing window is if you open a bookmark or .html file, but there is no practical way to control which profile those can be opened with because the handler is in Windows which only allows for a single handler. (I’ve come up with a system to support this, but it’s beyond the scope of this question.)

For some work patterns I need to switch between many profiles. The problem is that even when a profile is already in use, a new window appears when I click the shortcut.

If the profile is already open, then why are you clicking the shortcut to open Chrome with the profile? If you want a new tab in that profile, then you can just press Ctrl+T in the appropriate window.

If your goal is simply to switch to the appropriate window (assuming you have so many different Chrome profiles that switching to the right one is difficult, even if you assign them different icons), then there’s no simple way to do that. Could try posting a feature-request to support it.

Is it possible to somehow modify the shortcut so it won't open a new profile window, but focus the existing window instead if it's already opened?

The closest you can currently get is to append about:blank to the end of the shortcut. It will switch to the specified profile and create a blank page, but you can easily close that. 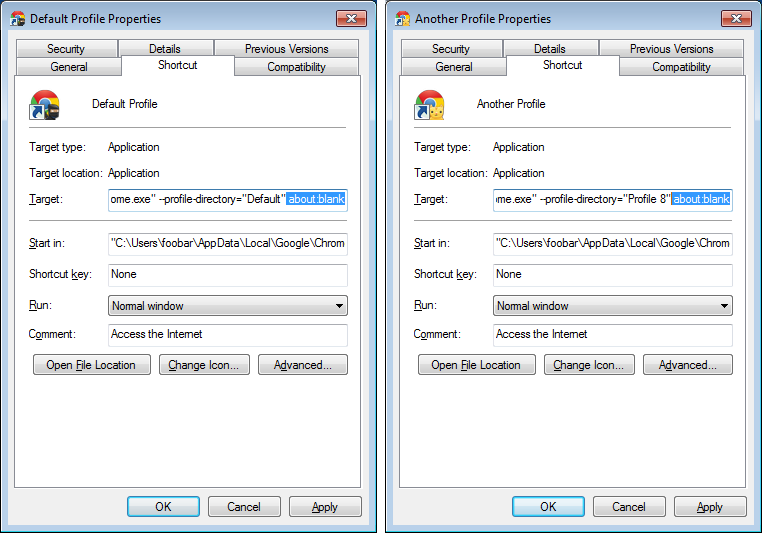 Eventhough you're offering a 100 bounty on this question. The fact still is that you can't do this. The functionality isn't there in chrome at the moment.

They easiest way how to make the shortcut directly to your Google profile is: Menu/Setting/ Then "edit profile" - sorry, my version is in Czech :-), so I'm not sure about the English view. Anyway that is the panel where you can choose the profile picture. And under all the pictures you have a choise "add a shorcut to the desktop". Jan

I could not find a solution to my problem, which is opening a shortcut in a new window without opening the web address AND a new tab.

But I have the solution for you people who want to open a shortcut in existing browser window.

After Default" simply put in the web address.

This will open the link in an existing browser window.

46
Force Chrome to open new pages in new window, not tab? (when opened from a program)
6
Open links as another chrome user profile?
32
Command-Line Option to Open Chrome in New Window and Move Focus
0
Disallow new tabs in Chrome window (open new tabs in other window instead)
7
Google Chrome no longer allows me to create shortcuts to open tabs as windows