Full disk encryption with Windows 8 and OpenSuse 13.1 on Lenovo B5400

I have Lenovo B5400 laptop and im trying to use full disk encryption with ability to use Linux next to Windows.

Im following this article but unsuccessfully because at some point truecrypt shows: 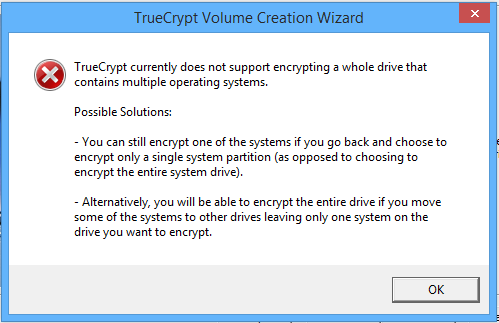 Laptop was originally without system, secure boot is turned off and hard disk has classic partition table in mbr. Is there any way to achieve full encryption or i have to stay with single system?

MBR has windows bootloader which loads directly windows or GRUB2 to boot linux.

I encrypted my entire drive using truecrypt while running dual boot system windows 7 + ubuntu. It should work. And it has to install a new boot loader, and will chain load the next one that asks where to boot.

Not the answer you're looking for? Browse other questions tagged linux windows-8 truecrypt or ask your own question.

1
Is there any full disk encryption out there that does not have any forensic traces? Any effective method?
0
How can I identify which device caused a `/dev` entry?
3
Dual boot and disk encryption
0
Truecrypt Full Disk Encryption - Bootloader on USB stick/pendrive
0
Restore Windows 8 and Linux (Debian) /boot/efi
1
Extend a PV partition in Linux
1
Resizing partitions; more Linux and less Windows