My computer is loud: How do I tell which fan is the issue?

On my new computer, my fan(s) is/are plain LOUD! Using SpeedFan, I find that my temps are all under 32 degrees C under my normal use (IDK how accurate that is but the CPU itself says 27 C).

One thing that I am thinking may be the problem is my CPU fan isn't PWM so would swapping that out help? There is no "linear voltage" or etc thing in BIOS so I think it may be running at full speed. Also, I could have too much airflow because it is also making a whistling noise that you can hear close to it that sounds like when I accedentially put part of the side cover over my floor vent to get it out of the way.

Use a small piece of plastic (like a pen cap) to stop the fan from spinning. That is the easiest way to isolate the cause. It's okay to stop it for a few seconds while on.

Most fan noise is due to failure of the bearings. Sometimes lifting the sticker on the hub and oiling with 3 in 1 lube will help with the noise.

If you can't disconnect or otherwise stop each fan (some may be hard to reach), you can use an old mechanic's trick. Place the tip of a long screwdriver against the body of fan and then press the side of your head (a spot near your ear) against the end of screwdriver's handle. The sound travels through the tool to your ear.

I'll just put this here as an alternate solution:

Un-plug each fan, one-by-one from the motherboard (or from the PSU, depending on the fan), and when you stop hearing the noise, plug them back in one-by-one until you hear it again (to verify that the one you thought was making the noise actually was). I'd do the CPU fan last; everything else will be fine with ambient cooling for an extended period of time, CPU's most likely to have issues.

Granted if you have a GPU with fans on it you'll probably need to use @Hefewe1zen's method for those ones.

I just don't like telling people to put hard objects and/or fingers near fast-moving objects. Too high of a chance of someone hurting themselves (esp. if they're un-coordinated)

Another method would be to obtain a mechanic's stethoscope, like this one. 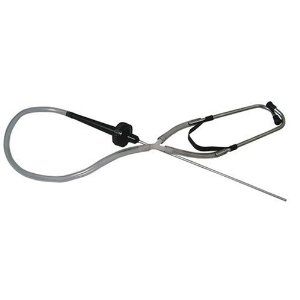 Just point the probe at each fan and you'll quickly discover which one is making all the racket.

Or for a cheaper method, use a paper towel tube or similar to focus your hearing, though this doesn't work as well and might be problematic in a tight case.

You could try pwmconfig from a live CD. It basically stops each fan for 5 seconds. See stopping which one is the quietest. It might not be able to stop all fans. Still a software based solution as no one has posted one yet.

Don't stop a fan while it's running, you could damage the blades if you're not careful. Stop it while the computer's off and do them one by one, otherwise you'll probably have to replace multiple fans. Look for dust in the PSU fan as it's probably the most enclosed and look for loose wires that might be catching on exposed blades.

You should strive to always have a PWM fan on the CPU block, if the temperature is low, then the fan will run very slow (silent).

On your intake and outtake fans you should at least have a manual adjustment or PWM fans you can control with your motherboard if it supports PWM on multiple fan headers.

If a fan is doing ticking noises or sounds bad, oil may help, but it is a temporary solution which will not work for long. Replace the fans with good PWM fans.

If you are very annoyed with fan noise look into good quality fans that are designed for their purpose.

Noctua imho creates the best low noise fans on the market, although they are ugly as hell. They have different fan models based on what they have to do.

They also include low noise adapters (lower voltage to fan) in all fan boxes in case you do not have any adjustment capability available yourself via motherboard or fan voltage adjuster.

Get a cheap medical stethoscope. Seriously.

I used to be an EMT so I had several lying around. Found they are excellent at isolating noises in anything. When I first starting doing this with my "antique" computers, it was to figure out which hard drive was failing. That's when I discovered that none of these old drives (pre-2000) has failing bearings as I thought. In every case, the noise was from a fan. Most often, the power supply (PSU) fan.

I stop the noise by removing the fan and poking a small hole in the foil cover over the central hub where I put a drop of 3-n-1 oil, then reseal with Scotch tape. Whatever tape used, it should be impervious to oil, have good adhesion and be as light as possible to avoid throwing off the balance. I'm sure there are better oils, but 3-n-1 has worked for me up to a couple of years. I've had one fan I've redone the process a second time and it's still running. Otherwise, just replace it. Fans are pretty cheap, and you can get an even quieter one.

My son's desktop came back from getting fixed by the manufacturer with an annoying fan noise. Since we didn't want to send it back I just started trouble shooting and found there was a piece of a connecting wire too close to the fan blade. I tucked it in and problem solved.

I have two fans on my computer, one for the CPU and one for the PSU. For me, the PSU fan is the nosiest one, and it does the kind of thing that you described.

The first thing you should do is: stop using the computer. Seriously. You could explode your PSU (if it is the PSU fan) or fry your processor, though the BIOS/UEFI and even the processor itself can shut down.

The second thing you should do is: if it is noise, it comes from somewhere. Simply put your ear next to the fan (not on it, you do not want to shock or cut your ear) and listen. You may put a pen cap or your finger in the center of your CPU fan and see if the noise stops.

And make sure you can do these things :) I wrote what works for me, it might not work for you.

Not the answer you're looking for? Browse other questions tagged fan cooling or ask your own question.

0
How can I tell whether a fan is going or a hard drive?

4
Why is my computer fan so loud?
3
CPU Fan is Loud, but the Temperature is OK (I Think)
7
Is the exhaust fan necessary?
2
Computer case front bay fan?
3
Is the cooling fan on a 2004 graphics card really necessary?
0
Troubleshooting laptop fan issue on Dell Inspiron 6400
0
Sony Vaio VPCEA24FM not exhaust in Fan Vent
3
CPU is hot and CPU fan making very many RPMs and much noise. (CPU fan not listed in speedfan)
1
Will my possibly dust-filled fan affect my computer soon?