Can Windows use headsets that have a single audio jack with 4 rings? 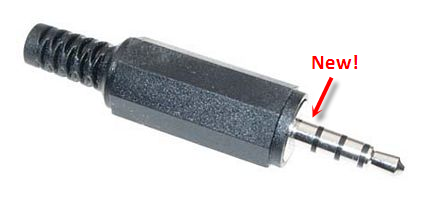 Also for several years now, these jacks have been recognized by MacBook Pros so that you can connect this kind of headset on your computer and use its microphone.

However, even though my MacBook Pro on Mac OS X recognizes the microphone built into my headset (that has one of those 4-ring jacks), it seems that Windows 8.1 on Boot Camp doesn't register my headset as a microphone and instead insists on using only the built-in microphone. This is an issue when I'm playing games because the fan kicks in and annoys everyone voice chatting with me.

Is there a way to make Windows aware of the microphone integrated to my headset and using the fourth ring of the jack?

The device manager says that the headset is advertised by the 'Cirrus Logic CS4206A (AB 11)' audio controller.

Only if you use something like this StarTech 3.5mm 4 Position Headset Splitter Adapter - Female to Male

Windows would need a mic plugged into the mic jack, unless the hardware you're using can tell windows that the input jack you're using is for speakers/headset and microphone.

Go to the task bar, and near the clock right click the speaker and click recording devices. Do you see your mic there?

Find the latest RealTek Sound subsystem drivers (check in your device manager on your Win install) on their website for the version of Windows you are running if available. Install them and see if it will pick up the extra ring. It's a 50/50 shot.

It's all still about the jack, Windows drivers never saw fit to support an Apple peripheral just to run under BootCamp.

Most threads on this, and from personal experience says to go get a USB or better yet Bluetooth headset and be done with cords altogether.

Once you plug in your headset, go to the control panel / audio devices. Set the property of the recording device from headset to standalone mic and switch the boost to full. It is by no means perfect as the sound is fairly weak but the best I managed to get out of it...

Not the answer you're looking for? Browse other questions tagged audio windows-8.1 boot-camp microphone or ask your own question.

0
Distortion from Sound Blaster Z after switching to headphones with 4 pole jack
5
How to make Windows 8.1 recognise/use the inline mic of headphones connected to a dual input
1
4-pin jack works on mac - with splitter it works on mac but not on windows

0
How to troubleshoot microphone or audio recording not working in Windows 7?
3
Microphone don't work on PC (electrelet condenser mic with 3.5 mm jack, requiring power)
2
Loud buzzing noise through microphone
2
How to get sound from a 'record out' sound output into a Thinkpad
1
Corsair HS50 microphone attached to headset not working properly