Want to improve this question? Update the question so it can be answered with facts and citations by editing this post.

There must some drastic hardware or setup differences, because they vary so much. For example, a 2TB desktop external hard drive, usually a 3.5-inch, is over 2 pounds, yet its portable counterpart, usually a 2.5-inch, is merely half a pound! If the storage pieces are exactly the same size and weight (they might not even be), then the spacing of parts must be different. In that case, wouldn't the smaller hard drives be more prone to overheat? There must be other issues too.

So I would like to know how they are built, how they are different, and in turn, which one has a lower chance of failure.

edit: Please share your knowledge and thoughts, as there is no consensus yet.
edit#2: Solid state drives right now are too expensive for me.

A low quality consumer grade 2.5" drive will be less reliable than an enterprise 3.5" drive, but if we assume all else equal, is there a reliability advantage in a particular form factor?

2.5” HDDs have lower power and offer improved MTBF and life.

Testing has shown the largest contributor to the life of a hard disk drive is the operating temperature. Heat from the application environment and sense current exacerbates electron migration in small semiconductors. ... Through a few important design changes, hard disk drive suppliers have created 2.5” hard disk drives that operate 24x7 at a DE surface temperature of 55°C.

In the end, Fujitsu claims that the 2.5" form factor is objectively more reliable, all else being equal. Principal contributors to the claims are the lesser mass and the extra engineering that goes into making 2.5" drives survive the more harsh conditions of mobile use (specifically, temperature and shock/vibration).

Summary Small form factor hard disk drives offer the advantage of lower power, higher capacity and higher performance per cubic volume when compared to 3.5” hard disk drives as well as more than adequate reliability and life when operated in a controlled environment with temperatures below 55°C.

Since all else rarely is equal, looking at MTBF and duty cycle ratings will give you a stronger impression of a given drive's relative reliability against another. For example, looking across the 2.5 and 3.5 enterprise (24x7) drives at HGST, we see that many of the 2.5" models have an MTBF of 2M hours, while the 3.5" drives come in at 1.4 to 1.6M.

This question is possibly identical to the ServerFault question Is there a reliability difference between 2.5“ and 3.5” HDDs?

There's no inherent difference between what you describe as a "desktop" vs a "portable" hard drive. The difference is in the drive and its enclosure, but there is nothing that determines whether an external drive is used with a desktop or as a portable drive.

All of these drives consist of a standard hard drive in an enclosure. The difference in weight is due to the enclosure, and whether a 3.5" or 2.5" drive is used. As performance improves on 2.5" drives, more of them are used for such purposes, because they are smaller and thus easier to transport.

The failure rates for 3.5" and 2.5" drives are comparable, but as a general rule, the price for a comparably-fast 3.5" drive will be less than that for a 2.5" drive. Also, many of the external enclosures for 3.5" drives include fans to keep the drive cooler, thus adding to the size and weight.

If I were after the best external drive possible, I'd buy the best enclosure, one that included some active cooling, and then put the best drive that I could afford into it. Most of the pre-packaged external drives don't use the fastest drives possible; if I cared about performance, I'd buy a faster drive with a longer MTBF (and associated warranty), especially because external drives do tend to get hot, shortening their life. Since the concern in the question seems to be focused around reliability, your best bet is to go to specific manufacturer data. Each drive will have a listed "mean time between failures" or MTBF (average amount of time the drive would run before breaking) and a manufacturer's warranty; a drive that has a 5-year warranty is obviously going to have better odds of lasting longer than one which has a typical 1-year warranty.

There is a good, if slightly dated, analysis of these differences here: http://www.notebookreview.com/news/notebook-hard-drive-guide/

But whether or not an external drive contained a 3.5" disk or 2.5", and whether it was a "desktop" or "portable" drive, simply relies on the choices I make in how I intend to use it.

Here's an example of a big ol' 3.5" enclosure that has a large fan to keep it cool: 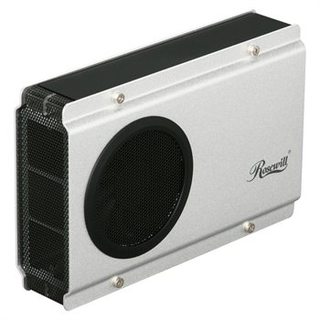 and here's a small one for a 2.5" drive, that you can tuck in your pocket: 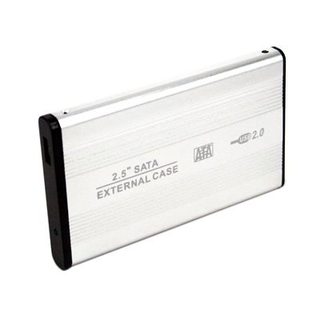 the latter is just a bit smaller than a 3x5" index card, and less than 1/2" thick. There are all sorts of variations in between, too.

Anything that has moving parts will have the potential to fail over time. Hard drives contain moving parts, such as the motor, the actuator arm, and the platters. Manufacturers will often provide a measure of how reliable a hardware product or component is. This is called the mean time before failure, or MTBF for short. MTBFs can vary based on quality and intended use. Hard drives used in servers, where the disks are in use 24 hours a day, are made to be more robust and reliable, and therefore have a higher MTBF. This also means they cost more.

Drives in servers and other enterprise class hardware are moving down from 3.5" to 2.5". This allows for greater density of drives. This in turn leads to better fault tolerance.

As for size, personally I do not see much of a difference in failure rates in traditional spinning hard drives. The biggest threat comes from drives getting banged around, especially during use. This most commonly happens in laptops, due to their portable nature. Some modern laptop drives and laptops come with accellerometers, that detect potential dangerous movement and can lock the actuator arm in a safe place before the drive can be damaged. Laptops that sit on a desk and do not move, are no less failure prone than desktop hard drives, in my opinion.

So what is the best option? Solid state drives. SSDs have no moving parts, so movement, vibrations, or other common failures are no longer a factor. SSDs and other flash media are used in any "ruggedized" equipment. SSDs dont have the storage capacity of traditional spinning hard drives and cost more, but they make up for it in reliability and speed.

Alot of the weight difference between those 2 drives could be coming from the actual enclosure itself. If you're going for reliability, the smaller the drive the better - reason being is larger drives have more platters and more read/write heads which means more moving parts and a higher chance something will go wrong. Smaller drivers like the 2.5's don't spin as fast too which could garner additional reliability with reduced performance.

This is why in servers you typically see a bunch of small capacity/high rotational drives combined in to larger volumes via RAID. Best of both worlds.

The other most important issue is the connector type (and quality of manufacture of both plug and socket - this unfortunately is hard to judge other than experience and time).

I have found over many years that the connectors used on the housing more often affect the life of the housing than either drive type or mechanical housing feature.

The best connector is the B type USB 2 connector, then the A type, then any of the miniature versions with last and least reliable the mini USB 3 connector.

To be considered reliable the connector needs to be able to work reliably for at least a 3 year period with at least one single daily insertion/removal cycle done by a relatively clumsy person. If not then it isn't reliable for backup use.

I have found that type A and B seem to last a 3 year period generally, the miniature versions last 2-3 years and the miniature USB 3 can fail after just 10 insertions.

The primary difference between 2.5 and 3.5" drives are the density and size of the platters - which is why 3.5" drives are typically cheaper then 2.5" drives - they can get away with lower densities and tolerances [ another way of looking at it is high capacities are only available in 3.5" drives because they have larger platters ]. Unfortunately, larger platters take more power to spin, and have greater inertia. They also have larger seek times as the head needs to move further - which is one of the reasons why historically servers often deploy 2.5" drives when transaction latency is important.

Smaller drives have less inertia, and are thinner disks, so another advantage in terms of reduced vibration etc.

Small drives are less prone to overheat because they use a fraction of the power of large drives (smaller motors for a start). They also often have fewer platters.

I put to you that you should not be looking to a 3.5" or 2.5" drive when looking for reliability, rather you should look towards raid to reduce your risk. I am not sure how practical it would be to do software raid [ under Windows, it works fine with Linux ], but the other alternative might be to buy a NAS with RAID, or even external hard drives with built in RAID 1. I'm not making recommendations here, but these drives do exist. For example here , here, here or here

Not the answer you're looking for? Browse other questions tagged hard-drive backup external-hard-drive or ask your own question.