Why do people source bash_profile from bashrc instead of the other way round?

It sounds like most terminal emulators don't run local sessions as login by default, so they'll load bashrc rather than bash_profile. So why do most people put everything in bash_profile and have bashrc source it rather than the other way around? By "most people" I mean most people I've seen so far. Maybe it's not as widespread as I think.

Instead of putting our configuration there and having bashrc source bash_profile, wouldn't it make more sense and be more consistent with the linux community to put everything in bashrc and have bash_profile source that?

I've heard good things about iTerm2, and it sounds like that and just about every other terminal emulator out there (other than the default OSX Terminal) would end up loading bashrc when I'm running locally. Not that it matters, as long as one sources the other, but I'm confused why preferring bash_profile is the standard?

Minor side-note: I was mistaken about iTerm2. It defaults to running login sessions, just like Terminal.app, though both emulators appear to have an option that lets you alter that.

People source bash_profile from bashrc instead of the other way around due to local convention.

All the opinion that I've read about how one configures their startup files in bash is primarily based on local convention. The local convention usually doesn't mention the big picture in that it doesn't talk much about the non-login, non-interactive case. The funny thing is, and I've looked, but I rarely see anyone mention cron in all their talk about why to put variables in one startup file versus the other. In fact, I've not heard one comment say: "/bin/sh is there for a reason. Bash emulates the original Bourne shell, /bin/sh, when invoked as such." For one thing, and I digress slightly, this case is important to people who work with the shell not only interactively, but who provide non-interactive, non-login (unattended or background) cron scripts that need minimal shell processing i.e. background processing doesn't require the niceties of colored prompts, command history and substitution, a properly defined $TERM variable, etc.

Further and with respect to cron, what I usually see is people creating minimal search paths or calling programs fully qualified, and not knowing how to deal with output not connected to a terminal (i.e. the non-interactive, non-login bash or sh case) when working with their cron scripts. This is usually because a good understanding of the shell startup sequence isn't fully understood, which leads to a user implementing their own startup files in a manner that is inconsistent or incoherent with the conventions already established in the local /etc startup files.

Elaborating, the setup done by local convention is laid out in that particular installation and shell's /etc files. If one examines any UNIX installation's /etc files, which are invoked as part of a typical bash startup sequence, then one should create their own start-up in a manner that is complimentary to the convention established in those /etc startup files.

/etc/skel/ The default files for each new user are stored in this directory. Each time a new user is added, these skeleton files are copied into their home directory. An average system would have: .alias, .bash_profile, .bashrc and .cshrc files. Other files are left up to the system administrator.

Though the bash manual doesn't mention these files that are commonly found in the /etc/skel directory explicitly, from what I recall, SunOS, Solaris, RedHat, Ubuntu, HP-UX, umips, & Ultrix have /etc/skel files to pattern a user's shell startup files after. OSX clearly does not - I'm using OSX 10.9.1 right now. Unfortunately, OSX doesn't give you much to go on in terms of how things should be setup in terms of convention, but since OSX is a BSD derivative, I simply used another BSD derivative, and patterned my own bash startup sequence after that, adjusting it to fit into the local conventions used in the OSX 10.9.1 /etc startup files.

An important point that was mentioned in a parallel comment is that for OSX, the convention is to start every new Terminal as an interactive login shell. This is indeed the default in OSX. There is no problem with this convention as long as the users of an installation are consistent. The default behavior for the Terminal on OSX may be changed to conform with other UNIX distribution's shell startup conventions by making the following change to the Terminal's preferences, in particular, change the setting, Shells open with: to issue the /usr/bin/login -f -l whmcclos bash -i command: 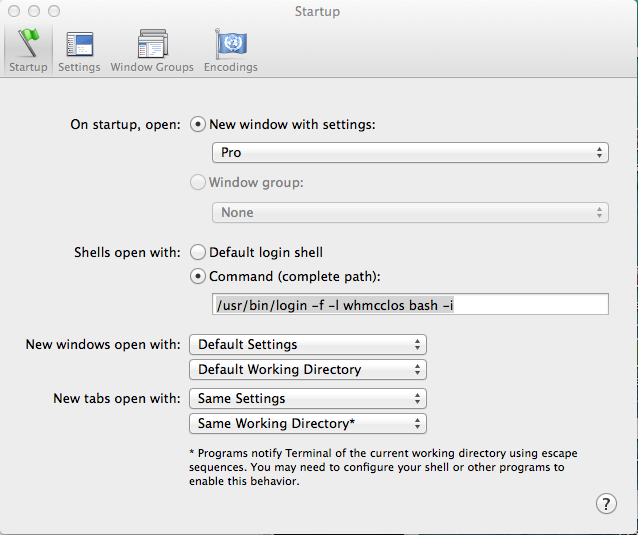 With all that as a background or introduction, I will segue into my best advice, for what it's worth.

Examine the files the admins of your UNIX distribution have put in place. Start with the following locations, if they exist. Don't forget to use the ls -a command, because some of the files begin with a dot. See how these files are used during startup, and see how your own startup files interact with them:

Look in the bash manual for the invocation and startup sequence. It is all laid out very well.

So that's my two cents. Keep in mind that my examples have tried to show the control path through the startup files and avoid what any particular site's conventions may impose.

why do we put everything in bash_profile in the first place?

Unless you are using mac, everything isn't put in bash_profile. It is put in bashrc

wouldn't it make more sense and be more consistent with the linux community to put everything in bashrc and have bash_profile source that?

It is common to put system information into the shell that is loaded when you connect to the machine (uptime, packages needing updating, cpu temp ect...). If bashrc sourced bash_profile, you would see all that information every time you opened a new shell.

Except for Mac, which loads the login shell for every new terminal (interactive or not)

difference between bashrc and bash-profile

Where are environment variables specified

[...] I'm confused why preferring bash_profile is the standard?

Who says it's the standard? The Bash manual itself has this to say on the subject:

So, typically, your ~/.bash_profile contains the line

after (or before) any login-specific initializations.

Not the answer you're looking for? Browse other questions tagged linux bash terminal shell bashrc or ask your own question.