How to find out RAM speed

I was in a shop today and wanted to know the speed of the installed DDR3 RAM. The assistant went to Task Manager > Performance and under the memory tab it said 800MHz. He said this means it's 1333MHz.

This is Aspire V5-552P-7412 laptop specs from the actual Acer website, they did not provide the information and Ramhound is correct, there is no possible way to get that information from just opening anything in windows.

This is the Ram I own: Kingston KHX1600C9D3B1/4G. this is what CPU-Z spits out in memory, nothing relevant to the actual RAM's Speed. Clearly, you can see my ram is 1600 mhz from the name. BUT standard setting for all DDR3 sticks is 1333 which is JDEC standard. This is the default setting that most motherboards are set to as long as your Ram can atleast support 1333mhz. You'd need to overclock your bios to get 1600 mhz. 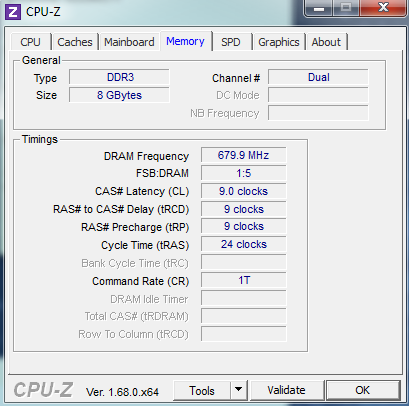 That all being said, if you really want to know the speed of the ram, call Acer? give them the model number and just ask them, if they know it, they will tell you. IF NOT, You're not going to tell the difference between 1333 and 1600, i promises you, ram speed has always been a way for ram companies to get more money out of you for "a faster mhz speed" the differences have been widely reported around the web that you'll 99.9999% of the time never see an actual difference as a user. it's possible a 3dmark type of program might with tests, but we are talking out of the realm of your laptop now, cause it's just a simple laptop.

The key with Ram is stability and functionality, not speed, remember that.

If you're using Windows, try this:

Not the answer you're looking for? Browse other questions tagged memory ddr3 or ask your own question.

-2
How to find MHz of ram sticks
0
RAM not performing at speed possible, have tried XMP

2
Maximum memory speed using a non-overclocked Intel Sandy Bridge (socket 1155) Core i5
1
Different memory speed within the same model
1
Contradictory RAM clock speeds
8
RAM not usable?
47
What happens if I use RAM of a faster speed than the CPU supports?
27
Can I use two types of DDR3 in the same motherboard?
0
Does my system support 1600mhz ram speed?
0
"Inexplicit" RAM Compatibility