How to Determine if USB mouse supports PS/2?

As in, will it work with one of those adapters that convert USB to PS/2?

I have used loads of USB mice and keyboards and those little adaptors always work with them.

(apart from situations where the little adaptor was picky and the computer's usb port was picky. I had a bunch of little adaptors, different makes. The good ones worked always. No special circuitry. The USB mouse/keyboard always supported PS2.

The issue is the other way, Ps2 to USB, then you need a big adaptor with special circuitry.

By the way, when I tried USB-Ps2 adaptors, some slightly larger green ones that looked like the ones you pictured, were a bit picky, but some slightly smaller ones that happened to be red and purple seemed more reliable in that they seemed to work in all my computers including a picky one(they were from a convenient rip off elecronics store called maplin).

I had also heard that all USB mice/keyboard seem to support Ps2. My experience of them is that.. I have tried many USB mice/keyboard , cheap ones, and without me having to check, and they've all supported them. Though I suppose it's possible maybe there are some that don't and you could get unlucky, but I doubt it!

The mouse is cheap and finding out if it works is like less than a minute once you get the items i'd just buy it and try it.

Ruslan (in 2019) comments "I've also used lots of USB mice, and until now I hadn't come across one without support for PS/2 via an adaptor. But now here it is: I replaced Logitech M-BJ58 with M100, and... it doesn't work in PS/2 port, although it works fine when plugged in directly into a USB port, and M-BJ58 does work in both. Dunno how Logitech could throw away such a trivial piece of functionality, but it's so. ..[and am] not alone with this combination of the replaced and replacement mice, see https://community.logitech.com/s/question/0D53100005101CqCAI/how-to-get-m100-mouse-on-ps2-port
"

It might be that as we move forward (in time), some other new USB mice might not support ps2! (as ps2 is more and more phased out)

Unless it comes with PS/2 support clearly noted, its best to assume it doesn't. As noted on this Wikipedia page, those adapters are nonstandard, so even if the mouse supports PS/2 you might be looking at the wrong adapter. Also, anytime you adapt back to PS/2 you're going to lose features of the mouse (the high DPI settings in this case).

If you really need PS/2, an active adapter should be able to handle any USB mouse - but at their cost, you're better off using a USB mouse (even if that means adding USB to your PC).

Active USB to PS2 convertors should just work. We used a few of these in servers where old servers still needed PS2 input and we only had a KVM with a 'USB mouse' output.

On the other had, you did not link to such a device. The device below is a passive plug which does not convert any signals. It assume that the mouse can do both USB and PS2 protocols, and that the mouse will detect which one it needs.

This means that you can not use this on a mouse which only understands USB.

Then there is a minor matter of the purple device you linked to. Colours from that era usually use orange or purple for keyboards, and green for mice. I am not sure that a keyboard plug is wired the same way as the green mouse plug. (The website you linked to call the one a replacement USB keyboard to PS/2). 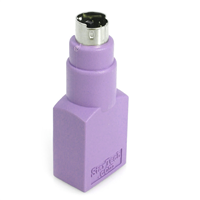 Not the answer you're looking for? Browse other questions tagged usb mouse ps2 or ask your own question.

6
Setting back and forward as mouse buttons on a mac
3
Mouse and keyboard randomly stop working
1
If I plug a two serial devices into usb adapters both into a single USB hub will my computer see two different COM ports?
1
My input devices (mouse/keyboard) disconnect during use
2
USB lag when mouse cursor changes
2
Gaming mouse stutters when used with KVM switch
3
Mouse weirdness
2
All USB 3.0 devices spontaneously disconnecting at the same time