Several unicode characters are not displaying on many big sites (like this: ⁠)

There are several Unicode charactes I'm just seeing as boxes. This happens in Chrome only. The Character Encoding is set to UTF-8, but Autodetection doesn't help.

You will only see two square brackets, but actually there is the Unicode Character World Joiner in between. It's a zero-width non-breaking space.

I also put together a little jsfiddle demo. I can't see the World Joiner character, but I can see the Hair Space. (And by seeing it I actually mean I don't see it. You see?)

This happens everywhere (Twitter, Facebook, you name it). I'm not using special fonts or have changed something font-related on my system (Windows 7, 64 bit). Am I wrong assuming this should just work?

This drives me insane. There are still so many characters that are not displaying. 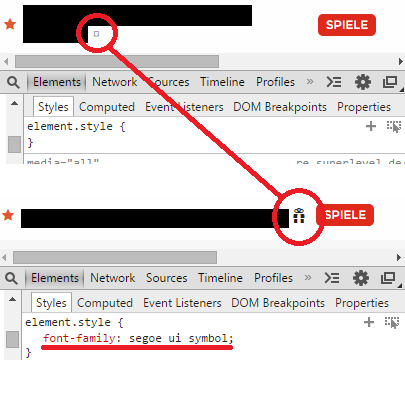 As you can see, Chrome is not displaying the character by default. Only when I explicitly set the font to Segoe UI Symbol, it does. Why is Chrome not using the font as a fallback automatically?

How can I make Chrome recognize the Segoe UI Symbol font?

Although it is more-or-less readable at 12 - 18 point, it is much clearer at about 24 point. Some of the dingbats should be at least 36 point. With font- smoothing it looks good at normal sizes.

There is a blog that mentions it
http://gschoppe.com/blog/fixing-unicode-support-in-google-chrome/
But the blog gets lots of things wrong in its description. (See comments on your question, for some examples. But his description doesn't matter)

You found the instructions mentioned on the blog worked, which was to extract the zip into the fonts folder in control panel and restart chrome.

Boxes or squares showing up in place of actual glyphs is a side-effect of the font you are using not having that Unicode character incorporated. Try looking for a font with a more complete Unicode implementation.

0
Why does my browser display abnormally few special characters?
34
How do I display the latest Unicode characters (esp. emoji) in Windows browsers?
0
Chrome Unicode Displaying Issues