Why doesn't it matter which ports I use on a switch?

The electrical engineer in me says "use any port" it doesn't matter. Gut instinct wants me to put the router's cable right in the middle. Ultimately, the router went to Port 1 at one end of the switch as that made the ordering of the cables easier to think about. My LAN diagram is here if desired.

Does anyone with experience across different installations have observations about the effects of "how close" ports are to each other?

I did Google a bit but couldn't find explanation about how the backplane or switching fabric specifically addresses the ports' physical locations.

I avoided mentioning these initially to try and not bring up the special cases.

Modern switches, both low-end and high-end, are generally built out of one or more switching modules. Each switching module typically has full, non-blocking connectivity between all of its ports. 5-port and 8-port modules are common today.

On some switches, there is an advantage to having devices that exchange a lot of traffic connected to the same switching module as that reduces backplane congestion.

Most modern Gigabit switches, managed and unmanaged, having 24 ports or fewer support full, non-blocking traffic on all ports. With more than 24 ports or with ports faster than Gigabit, this starts to get expensive and that feature becomes rarer.

The V1910-24G has a 56Gbps backplane, which is fast enough to support maximum traffic on all ports.

Ethernet is designed with a bus topology in mind. This means each connected node assumes it will get traffic not intended for it, and thus will drop it if it's not addressed to it, or a broadcast packet. (You can override this and put NICs into promiscuous mode where it will accept all packets, not just packets destined for it, if you want.)

Before you had switches, you had hubs.

When something sent traffic to a port on a hub, the hub would repeat the traffic out of every other port. The destination computer would hopefully be elsewhere on that hub and get the traffic it wanted. Other computers would ignore it, unless it was a broadcast.

Switches learn what MAC addresses are behind what ports, and will use this knowledge to avoid repeating traffic to each port (called "flooding") if possible. If it's not possible, it goes ahead and floods just like an old-school hub.

On enterprise-level managed switches, you can do things like prevent a port from forwarding traffic of a different MAC other than the first that connected to it, and all kinds of other neat things. Your basic consumer level 4-port or 8-port switch doesn't have this capability.

Before you had hubs, you had all nodes physically wired in and connected to a single physical thicknet or thinnet wire. And this was indeed, a true bus topology. 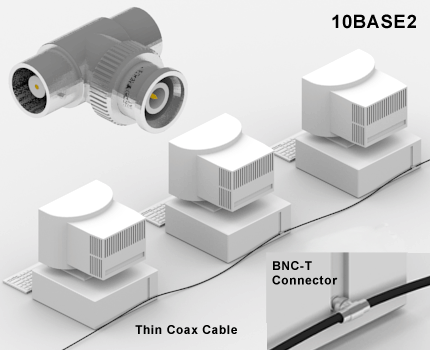 Actually, on certain types of switches it DOES matter. While a plain-vanilla switch should give you the expectation that all ports work the same, here are two other cases:

It only doesn't matter on bog standard switches that have no special features.

These usually have a standard single controller and there is nothing technically different between ports.

Be careful, there are some home switches which have QOS or similar technologies where ports do actually matter.

On the other hand, if you use managed switches, depending on the management used, it can make a BIG difference what ports you use!

0
Why would a hub work when a switch doesn't?
11
When connecting two switches, should I use normal switch ports or the SFP ports?
4
Daisy chaining PoE switches for IP security camera system
0
Why would changing ports on my Switch/Router change speeds
0
VLANs / Isolation on Home Network
1
Possibly broken switch ports, how to diagnose?
0
Multiple PCI-E ports without a switch