Sources of Linux memory usage not in /proc/meminfo

During normal operation, around 200MB of memory are used for applications according to munin, but every now and then (maybe every couple of days), there’s a sudden increase by around 1GB, as visible in this graph: 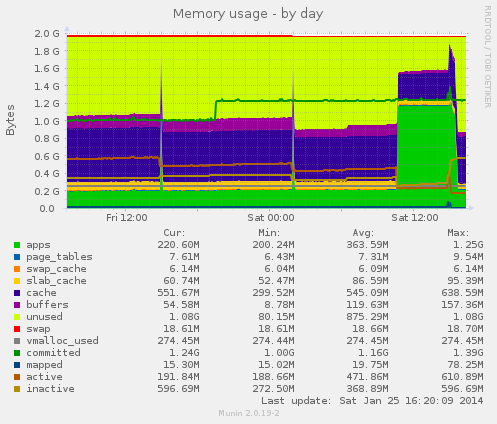 I’ve been trying to find the cause of this, but I’m not sure what it could be. The fact that munin attributes this memory to “apps” suggests to me that one of the running processes is simply using a lot of memory, but looking at top when this happens shows that none of the processes uses nearly as much memory; in fact, the top 15 memory consuming processes don’t change at all when this occurs and the top one only uses 2.2% of the memory. Also, the memory info from ps doesn’t nearly add up to this much memory, but rather something in the ballpark of 200MB.

The height of the increase is usually the same, and as visible in this example, it just disappears after a few hours.

I’ve found that a reliable way to trigger this behaviour is by downloading a large file (1.4G) using wget via an ssh tunnel over the network to the local disk (network activity alone doesn’t trigger it).

To see the memory usage in more detail, I’ve started to log /proc/meminfo every 10 seconds and made a tarball with graphs from this data. The download causing the behaviour in question started at 10:35:32 and was finished at 10:38:53. The original log data is also included in the tarball.

In /proc/meminfo, there’s no value that goes up enough to explain that huge decrease of free memory (this is essentially what munin attributes to “apps”), which leaves me clueless. The amount of used memory that munin reports is also reported by free and top, but there are no processes in the process list that would explain such high memory usage, or the sudden increase when downloading a file.

What I’m trying to understand is:

Or could this be a sign of the system being compromised?

munin is great for the graphs, but it doesn't tell which application caused the load.

One could use atop - advanced top.

atop records raw log file, and than one can open such a file and interactively go back and forth in time and see what was happening at some specific moment.

ator -r /var/log/atop_oame_date than using tand T keys you can go back to the time of the suspicious activity and see what was happening there.

Your system is under no physical memory pressure. So when you try to transfer a 1.4GB file, it uses 1.4GB of memory. Your system has two choices -- it can either waste memory entirely or use it inefficiently. It chooses the latter. This is normal behavior.

1
On Centos 6.3, why do several swap measuring methods return different results?
1
What’s eating almost all memory and swap in this Linux machine? (not buffers/cached-related)
5
htop memory usage does not add up with process list
1
Windows 10 Memory Leak ("Proc") and ("Job")
0
Check which processes are eating swap on Linux?