My NVIDIA Control Panel seem to have a lack of settings other than the 3D Settings; 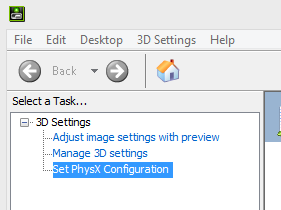 I searched around a bit and found some similar problems on other websites which seemed to either have solutions that didn't work, or no replies at all.

I have a nVidia Geforce 710m and I'm on Windows 8.1 however the problem also occurred before 8.1 on 8, I re-updated a few minutes ago to the latest drivers for my GPU and OS (332.21) and the problem is still there.

Any help would be much appreciated.

The Intel integrated graphics adapter in your computer is most probably the source of the problem.

Your "problem" is not a problem at all but its the nature of your machine. You have an "Optimus" system which means you have an intel graphics processor and an Nvidia.

So yeah, in a nutshell there's no problem.

Another entry in the same thread says :

Not having experience with Optimus it was just a guess, as it works that way on my PC with HD4000 and AMD gpu.

When the integrated is selected as default in BIOS the AMD control panel is not fully functional (Don't have integrated on the Nvidia machine). I find it more difficult to get good results with the HD4000 re - aspect ratio.

If your BIOS has an option to define the nVidia Geforce as default, this might fix the problem, but might place more demand on your battery.

The thread Stereoscopic 3D missing in nvidia control panel has a simpler solution, which is to ensure during the Nvidia driver installation that all its components are marked for installation, even the ones that are unchecked by default since they are currently handled by the on-board Intel adapter.

Try to reinstall the Nvidia driver to see if this is also true in your case.

You could also go on the NVIDIA Driver Downloads page and use the automatic detection mechanism via the "GRAPHICS DRIVERS" button, to see if it suggests the same driver package that you have already downloaded. This requires Internet Explorer or having Java installed for other browsers.

This sometimes happens to me, I have to go into Device Manager and disable/enable one of the card for the control panel to update.

I've found that sometimes if you close the nvidia manager in the bottom left corner of your desktop, then right click the desktop and open nvidia control panel, it sorts itself out.

This is by design. The missing settings are either not applicable with your current hardware (it only shows the Stereoscopic 3D section when you have a capable display), or are currently being controlled by another driver (probably the integrated graphics). You should always be able to select the display resolution and related features by using the Windows Display settings dialog, available by right-clicking the desktop.

Using the integrated graphics for the Windows desktop does not normally prevent games from automatically using your discrete graphics hardware. In cases where it does (as determined by in-game performance and diagnostics), you should be able to override by using 3D settings->Manage 3D settings (see here).

If you want a bit more control/visibility over what's going on, check out these features under NVIDIA Control Panel->Desktop:

Using the right-click context menu to specify which graphics processor to use could be necessary for non-game applications that may use 3D acceleration (for example WebGL enabled browsers). See for example http://fishgl.com, which displays the rendering speed in frames-per-second, as a way of verifying that this selection makes a difference.

For what it's worth: On my current laptop, the additional settings show up any time I connect and enable an external display. I'm running Windows 10 with the latest NVIDIA driver (384.94). Your mileage may vary, depending on software versions and hardware capabilities.

I found that if you right click on the desktop and click "display settings", go to "graphics settings", set it to classic app and browse for the program you want to use with your nvidia GPU (for example choose the game launcher of the game you want it to run with), click add, then click the program, options, "high performance". Then it should always start with your high-power GPU.

Not the answer you're looking for? Browse other questions tagged windows-8.1 nvidia-geforce or ask your own question.

45
How to disable NVIDIA Optimus on a Dell XPS 15?
3
Windows 8, NVIDIA graphics recognition fails
5
How can I force my laptop use NVIDIA instead of Intel?
0
Use 4k monitor @60hz with Nvidia GTX 850M
0
Nvidia GeForce 9400 GT failing on POST on one PC but working just fine on the other
0
Which NVIDIA driver is suitable for GeForce GTX 660M?
25
How do I "safely" keep my NVidia card up to date?