TEMP vs TMP in Environment Variables

Is it right to have these two environment variables TEMP and TMP? If I make changes to one should I make the same changes to the other? For example I was installing cygwin and the directions told me to change the PATH variable, but both TEMP and TMP have the path variable. What is the difference between the two? 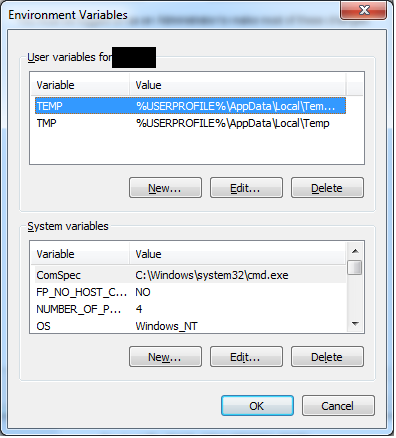 To answer the question specifically:

What is the difference between the two?

There is no difference. They are just different aliases for the same path. As Mark mentioned, some programs use %TMP% while other use %TEMP%. Windows assigns both to the same path by default to ensure consistency between different programs, and even protect against developer errors such as using both in the same program.

Also note that the %Path% variable has nothing to do with either %TMP% or %TEMP%. %Path% is a system variable, while %TMP% and %TEMP% are both system variables as well as user variables. The system versions link to C:\windows\TEMP. AFAIK, only the "System" user can actually use those variables, as evidenced by a simple test; open a cmd window and type in echo %TMP% or echo %TEMP%, and it returns the path defined in the user version of the variables. However since %Path% has no user version (by default), you can do echo %Path% and it returns the value of the system variable.

I'm not entirely sure how programs use the "Path" system variable, which is likely what cygwin was referring to, but regardless, I can assure you it has nothing to do with TMP or TEMP.

Hope that answers your question.

EDIT: I just remembered what %Path% is for — it lets you access any files that are in any of the paths specified in the variable without needing to use the full path to the file. For example, adding "C:\myprog\bin" to %Path% will let you just type myprog or myprog --help etc into the command-line without having to type out the full path, like "C:\myprog\bin\myprog.exe" --help. Of course command-line use is only an example, it lets any program or interface access any kind of file without needing the full path.

You do need both as different programs use different ones.

They do not need to be set to the same place as only very badly written programs will use both assuming they point to the same thing.

From memory (when I used this in mid '80s) TEMP was the original one used in DOS and TMP tended to be used by programs that were ported from Unix to match the /tmp. However when programs got written in DOS as there was no control different developers used different ones. In modern Windows Microsoft's default is the same for both see this doc

4
Powershell systemroot in $env:path different when AC elevated
0
%PATH% in Explorer bar causes error
1
How can I set up an environment variable to work with TCC?
1
Why didn't SETX update my PATH when I tried adding VLC? (Windows 7)
0
Windows: Can't launch any program from command prompt
2
PATHEXT environment variable not working