Why can't I access MySQL server with port forward rule in router?

This is my setup (the relevant parts, anyway): 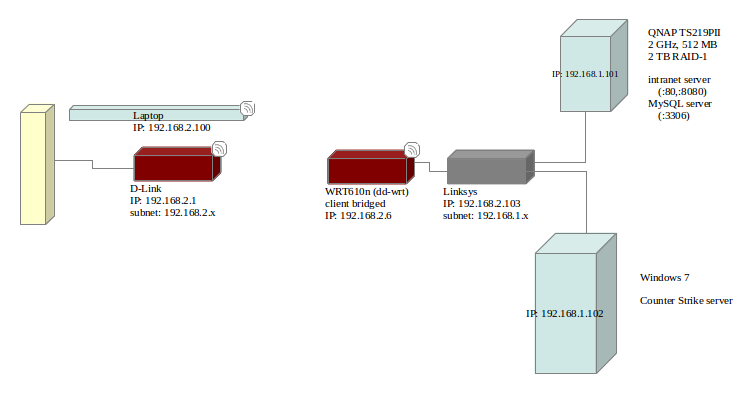 I have port forwarding rules in place (in the Linksys) for all the relevant ports and I've restarted that router multiple times, each time hoping that would be the magic that makes it work. I've tried removing the port forwarding rule and then re-adding it. Still no go.

From the laptop, I can access the NAS (QNAP) via ports :80 and :8080 as well as the counter strike server on the Windows 7 box. So I know those forwarding rules work (and, more importantly, that the client bridged dd-wrt isn't interfering with them).

I can access the MySQL server in the following ways:

I cannot access the MySQL server from the laptop despite the fact that I have 3306 forwarded to 192.168.1.101 (and I've checked the configured port of the server multiple times; it's 3306). It appears to just time out while trying to connect via:

Note: I do not have an actual domain or any name servers, LDAP, etc. All done via hosts files. When trying the above, I've tried by both IP and by name.

From the laptop, I am not able to connect via:

I am able to log in to the mysql db from the laptop via ssh port forwarding (tunneling to a different machine also on the 192.168.1.x subnet).

So, it seems the question has become: why is port 3306 getting filtered (with forwarding rules in place) while other traffic is correctly forwarded?

Another oddity I noticed is that the other db traffic that I saw in tcpdump (dest port 3306) had a source port of 51883. I'm not a TCP guy, so that seemed strange to me. Does the source port have any bearing on this problem?

Does anyone see what I'm missing?

So, after having given up on this (I ended up creating a script to start an ssh tunnel, start the program, and then close the tunnel when the program ended), I was in my router tonight and found the problem.

I was so frustrated by the fact that there was no apparent reason why 3306 shouldn't be correctly forwarded. The reason turned to be that I'd forwarded it elsewhere. I have a fairly complicated network (only a small portion shown) and I expose a lot of internal services via port forwarding. The wired Linksys only has a few slots for forwarding rules, so to get around that, I have ranges forwarded. IMAP and Glassfish are on the same server, so I forwarded 143-4848 to their server, but MySQL (3306) is on a different server. <smacks forehead>

Not the answer you're looking for? Browse other questions tagged networking router mysql port-forwarding nat or ask your own question.

1
Why isn't my port forwarding with mysql working on my server?
0
Can't connect to remote MySQL server but works with localhost
0
Command-line access to remote MySQL server
0
Mysql port forward and access from any pc outside network
0
port forward on second router
0
How to forward port 443 on C1100T wifi router
0
Expose a mysql server over an ssh tunnel
0
MySQL cannot start. [ERROR] Can't start server: Bind on TCP/IP port: No such file or directory